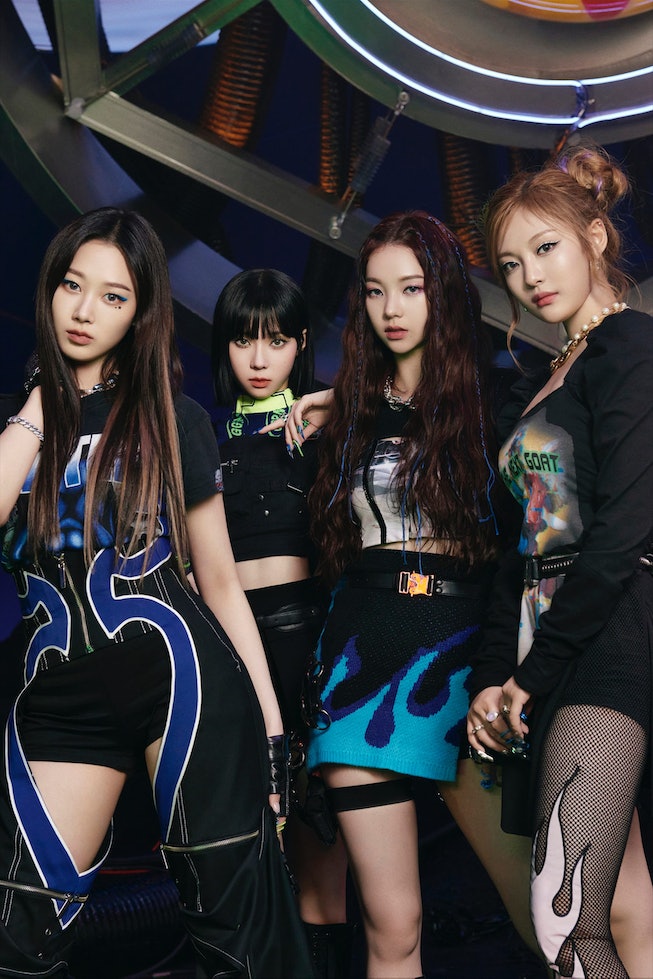 A year ago, just a few months into their pop star careers, aespa brazenly told the world they were on the next level. In retrospect, the K-pop quartet was just preparing us for their inevitable rise. A top-selling EP, chart-topping single, and surprise performance at Coachella later, and Karina, Giselle, Winter, and Ningning are now considered one of the most successful girl groups in the current K-pop scene. And 2022 promises to be an even bigger year for the metaverse superstars as they aim for world domination outside of the fictional realm of Kwangya.

Aespa has been dubbed Apple Music latest "Up Next" artist, a designation that’s been shared by Billie Eilish, Bad Bunny, NCT 127, and many more. Alongside the new title, group will also release an “Up Next” feature short film in the coming weeks, from which NYLON exclusively shares a clip below. In it, the girls open up about their familial dynamic and the differences that bring them together, as well as what it was like to perform on Coachella's main stage, and in front of an IRL crowd of thousands for the first time.

"Because we debuted during Covid-19, we rarely had opportunities to perform in front of an audience," says Winger in the clip. "Performing really gets much more fun when people are actually there," Giselle adds. It's an astute observation, but the gravity of that moment wasn't lost on aespa, who became only the third K-pop girl group to perform at the festival.

On Tuesday, May 31, aespa announced that they were gearing up for their new album, Girls, set to arrive on July 8. The summer EP will be released in partnership with their new U.S. label, Warner Records, and will be preceded by the group’s first English-language single, "Life’s Too Short," out June 24. To kick off this new era, aespa also gave fans a taste of the album with the pre-release track "Illusion," a synthpop siren's call with a deliciously dirty bassline that highlights each member's vocal charms.

The reason for aespa's global success can't be traced to a single concept or song. They traverse a multidimensional soundscape of electro synths and hyperpop maximalism with self-assured ease — a powerful sound for a group who emits their own commanding feminine aenergy and imagery. In their conceptual world, aespa are young women on a mission to save their virtual counterparts from a mysterious evil, transforming into digital age warriors who save the day. As thrilling as the group's futuristic worldview is, it's the members themselves who connect with audiences around the world, luring you into aespa's metaversal web with real-world charisma. And it wouldn't work if the girls themselves didn't have such compelling chemistry. "People may think we're just group members," says leader Karina in the forthcoming Apple Music doc. "But we think of ourselves as family."

As aespa prepares to take over our screens this summer, you might want to study up on their lore. Their success is no illusion; it's all part of their master plan.