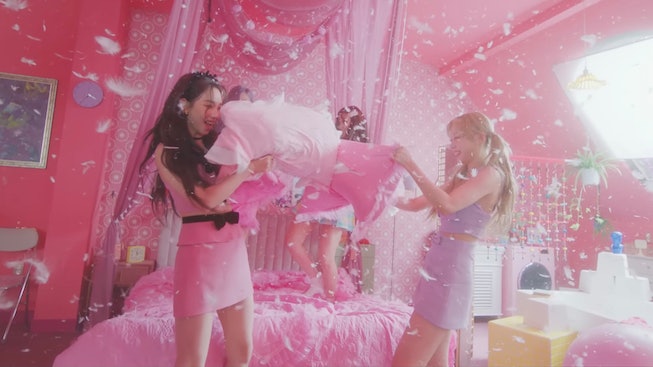 K-pop It Girls aespa are back with their second mini album: GIRLS will release later this summer. The announcement follows a historic Coachella performance — which marked the group’s third-ever performance in the U.S., as well as made them the third K-pop group to ever play the festival.

People can’t get enough of the futuristic K-pop group, which is made up of Karina, Winter, Giselle, and Ningning — and their own AI avatars, known as the æs, which live in the digital world as friends, companions, and support systems to the actual members. And yes, when we say “people,” can’t get enough of them, we also mean Grimes, who counts herself as a major aespa fan. The group also made history in the last year when they became the first K-pop group to perform in the Macy’s Thanksgiving Day Parade, as part of Olay’s STEM float — chic and smart!

GIRLS marks the group’s first album since their first mini-album Savage in October 2021, and their first release since a remake of S.E.S.’s 1998 “Dreams Come True.” The nine-track mini-album GIRLS releases July 8. Here’s everything we know about it so far.

There’s already a single out

Crucial information for Grimes and other aespa fans: You won’t have to wait any time to hear some of the new music. Apple Music officially announced that aespa was their “Up Next” artist for June, and released their single “Illusion,” off the album, along with a promo video of the group.

And we’ll get another single soon

The group also has a new English song: “Life’s Too Short,” which releases June 24.

In true aespa fashion, GIRLS promises synth pop that is dancey and futuristic. The teaser video shows a panorama of a digital mountain range with a Y2K metallic purple font and a sound like the revving of a car powered by a synth.

In an interview with Rolling Stone last July, aespa’s Karina talked about the direction the group would like their music to go: “I’m sure that our song lyrics will get more interesting as they tell a story of our adventures in that world, adding on to the fun in uncovering the full story with each new release,” she said.

Yes, they will come back to the U.S. to promote GIRLS

In an interview with Billboard at Coachella, Giselle confirmed aespa “will be back in the U.S. to promote our next album.”

“It hasn’t been long since our debut, so I think there are many ways to improve,” Karina explained. “Our first EP Savage received a lot of love and support, but we want to continue to work hard to become a group that receives love not only in Korea, but also globally with new music that will wow the world.”

aespa is living their life to the fullest in the video for their single “Life’s Too Short.” A bubblegum pink slumber party, web aesthetics, and a mantra about doing you regardless of what the haters say — what’s not to love? Watch it, below.

This article was originally published on June 1, 2022