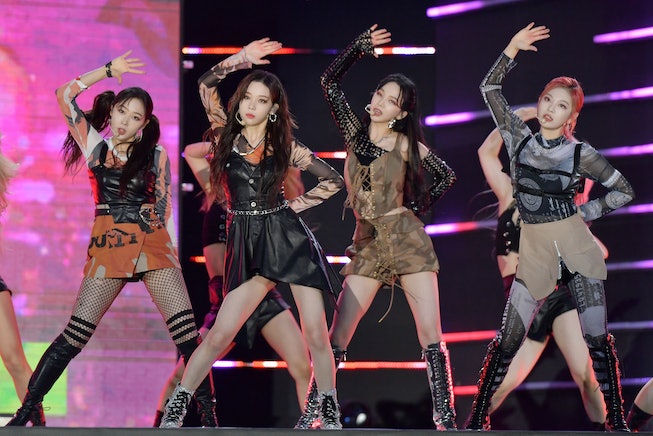 aespa is set to make history as the first ever K-pop girl group to perform at the Macy’s Thanksgiving Day parade in New York City later this month.

aespa — made up of Karina, Winter, Giselle, and Ningning — is one of K-pop’s most mesmerizing acts, and the first group with their own AI avatars, known as the æs. But don’t call them a foursome; while Karina, Winter, Giselle, and Ningning navigate the real world, their AI avatars live out their lives in the digital world and serve as support systems to the actual members. "We are an eight-piece group," Karina said in a press conference for their single “Next Level,” released in May 2021. "We took lessons for a long time to fully understand our concept and universe. Now, we know who we are."

aespa burst onto the scene with their dizzying debut track “Black Mamba” in 2020, and their star only continues to rise. The girl group’s latest drop, their six-song Savage EP, landed in early October to record-breaking success. The Savage EP sold 510,000 copies during the first 15 days of its release, and per Forbes, became one of the most successful releases in U.S. history by a K-pop girl group.

According to Macy’s website, aespa will be performing on Olay’s “Her Future is STEM-sational” float, a devastatingly cringe pun meant to inspire women to take up careers in science, technology, engineering, and mathematic fields. (The float will feature a woman astronaut, twinkling lights, a robotic arm, and turning gears, which works with aespa’s innovative message and therefore kind of makes up for the severity of the pun.) Not that it matters! All eyes will be on aespa’s performance — and their impeccable, futuristic outfits.

Macy's has yet to reveal which songs aespa will perform during the three-hour event, but it’s safe to assume the big hits — “Black Mamba, “Next Level,” and “Savage” — will get airtime. aespa’s forthcoming performance at the Macy’s Thanksgiving Day parade makes the girl group the second K-Pop act to perform at the classically American event, following a performance by NCT 127 an the 2019 parade.

Joining aespa are artists like like Andy Grammer, Darren Criss, Kim Petras, Nelly, Kelly Furtado, and Kristin Chenowith. This year’s parade takes place on November 25, with floats heading across Manhattan to Macy’s Herald Square from 9 am to 12 pm EST. Until then, watch aespa’s music video for “Savage,” below.