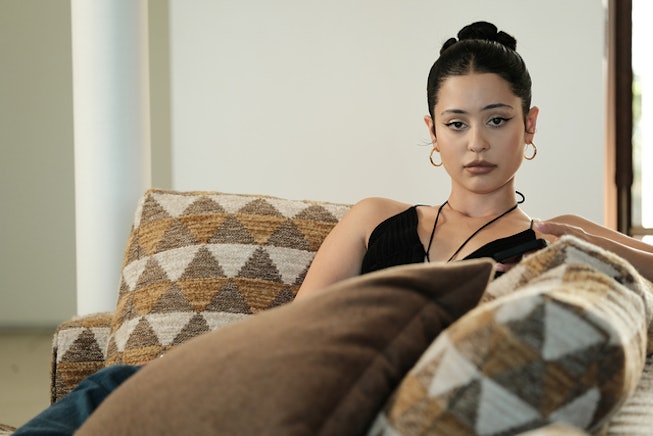 Warning: spoilers ahead for season two of Euphoria.

If there’s one thing we’ve learned from watching HBO’s hit teen-drama Euphoria, it’s that quite literally anything can happen to the students of Eastland High — even an emotionally charged game of Russian roulette for an illegal sex tape. Typically each episode of Euphoria leaves us with a plausible, though intriguing cliffhanger, but last week's episode provided more questions than answers. Why did Nate (Jacob Elordi) give the tape to Jules (Hunter Schafer)? Did he have to traumatize Maddy in the process? Was that his plan all along? And if so, how do we file a complaint with Sam Levinson?

After the episode aired, Twitter and TikTok erupted with conspiracy theories as fans picked apart Maddy and Nate’s terrifying encounter over a tape with explicit footage of Jules, a high school student, and Cal Jacobs, Nate's father. Since then, Alexa Demie, who plays Maddy in the series, sat down with Entertainment Weekly to clear the air. In an interview with ET's Marcus Jones, the actress revealed that her character was originally going to return the tape herself.

Apparently, we were almost spared from seeing Nate threaten his ex-girlfriend. “There was a moment where I was gonna give the tape back to Jules with a letter saying, ‘I think you’d want this’ and not say who was giving it to her, but give it back to her, which felt really nice for me,” she continued. “And there was a part of me that really wanted to see that happen, but I think the way it goes down keeps the story going, and it’s drama.”

There you have it. They did it for the plot, which will continue to unfold in the season's final episodes. As for filming the scene, Demie explained it was a bit experimental. “We didn’t have a lot of time. We just kind of jumped into it,” she said. “We were really figuring it out as we went on and as we were shooting it. Sam was discovering new things with the camera and Jacob and I were discovering new things with the dynamic between us.”

The next episode of Euphoria premieres on Sunday, February 20th on HBO Max. Until then, check out the sneak peek for episode 7 below.