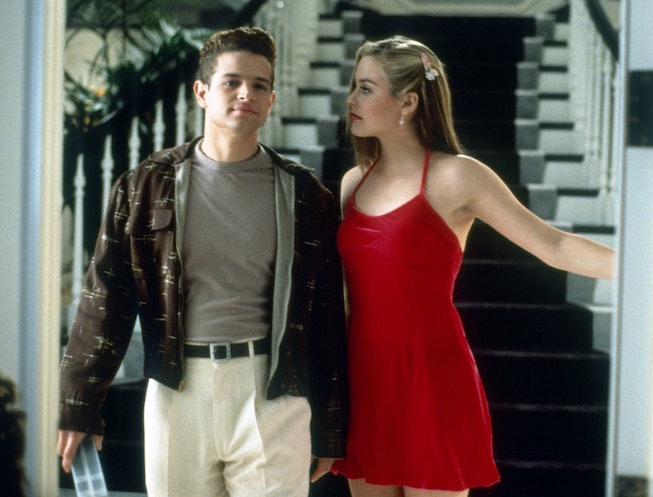 Are we totally buggin’, or is Alicia Silverstone’s TikTok turning into a Clueless memorial? The actress who starred as Cher in the 1995 coming-of-age flick, recreated another scene for her fans. And this time, with the help of a famous friend.

The video, which was uploaded on TikTok, remakes the film’s cringe-worthy date scene, when Cher invites her crush Christian over for a romantic night in. But things go awry when he’s more interested in watching the movie he brought — Spartacus, of course — than heating things up with his doe-eyed date (due to the fact that he’s a “friend of Dorothy,” as Donald Faison’s character points out later in the film.

In the film, Christian is played by Justin Walker, but designer Christian Siriano stepped in for the TikTok recreation. Silverstone tries playing footsie, Siriano looks over at her confused. “My feet are cold,” she says, timidly, over the original audio.

Their TikTok is nearly identical to the film, but when Silverstone famously falls to the ground Siriano jumps with her instead of leaving. The actress jokingly captioned the video, “I finally got Christian in bed.”

Though we’d love to see more of these two’s antics, they met up for an entirely different reason. Siriano invited Silverstone, and friends, to a luxurious chateau in Provence, France to celebrate his newest collection.

The designer posted a photo of Silverstone modeling one of his gowns on Instagram. “It’s not an Alia but it sure is a fabulous Siriano,” he wrote, referencing the “totally important” designer Cher wore when she got mugged.

According to Bustle, Siriano’s upcoming collection is all about “waking up.” In Cher-approved fashion he said, “ Put a dress on. Make every day your own runway. Don’t just un-approach life. That was the idea.”