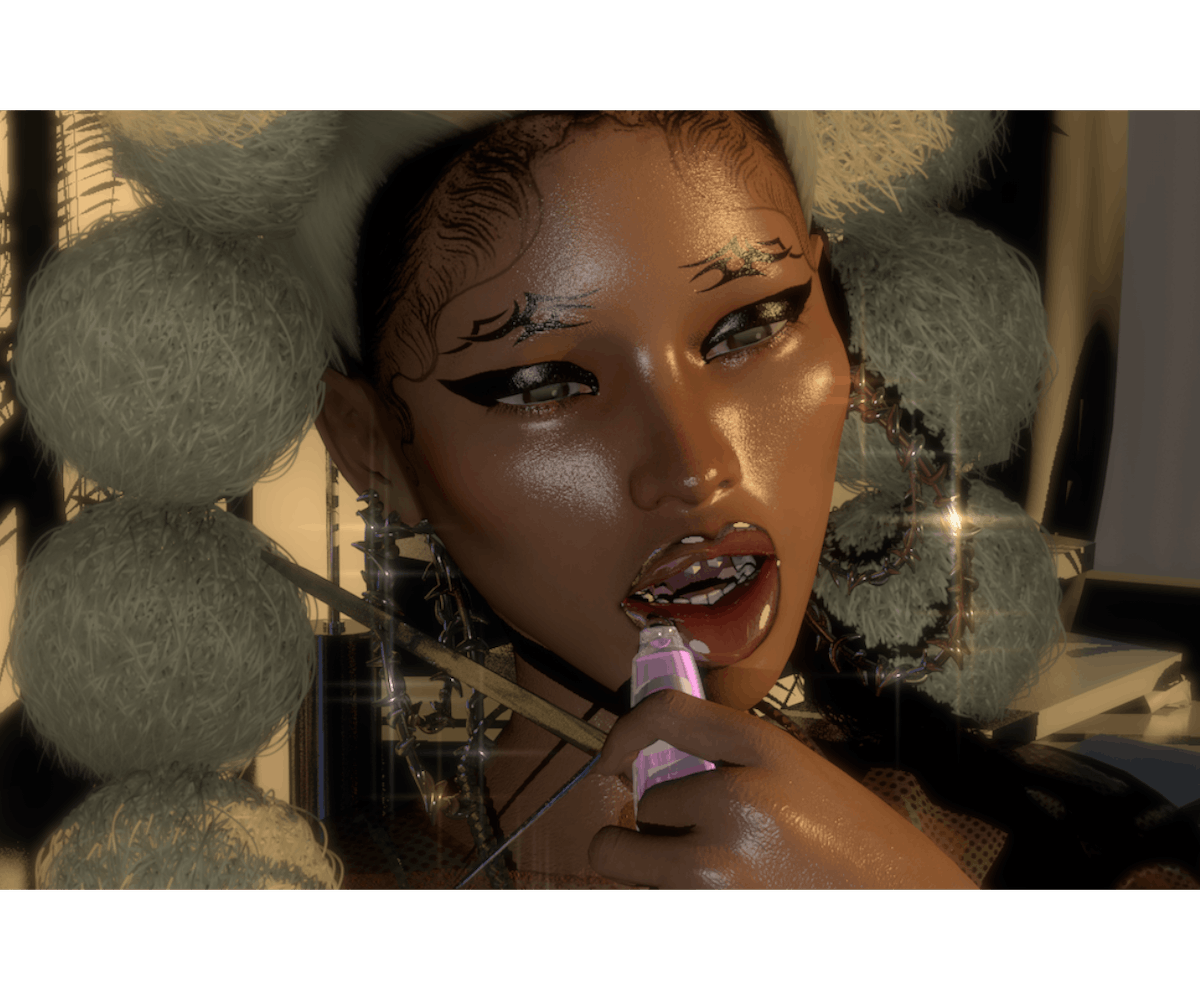 Despite their best efforts, quarantine Zoom parties will never hit the same way as the real thing. But the virtual world definitely has its perks, especially in its ability to bring your wildest, luxe fantasies closer to reality than ever. Designer clothes, elite clubs, and lip gloss that stays glossy as hell are just a few virtual vices brought to life by Philly's R&B meets neo-soul singer Andrea Valle in the music video for "Wild."

Working with artist and director Sarah Nicole Francois, known for her seductive, ethereal goth digital avatars, Valle throws a glistening club party as the track's sensual NickyDavey-production pulsates in the background. A 3D-rendered Valle became an enviably cool club-girl that rules her tropical paradise with ease. Whether Valle's avatar swims through an inky black ocean or hypes herself up in a mirror, she's unbothered, powerful, and dressed to kill in looks that honor fashion's original provocateurs as well as contemporary trailblazers. Didn't you hear? The perpetually sold-out Telfar Shopping Bag is always available in cyberspace.

"I wanted a track that would wow people, bring something they could move to and playback at any party of the summer," wrote Valle over email to NYLON. She succeeded — "Wild" is easily the type of track that makes you yearn hard for a dimly lit, crowded party where anything can go down. Valle's forthcoming EP Lovergirl, is set to drop on June 25 via b4. Below, Valle chatted with NYLON about "Wild," being a proud Philly girl, and more.

How did the concept of this video come to fruition?

With all the restrictions that came with quarantine, we decided it was best to go completely virtual for this. I’ve had my eye on Sarah’s work for so long and thought she’d be the perfect person to render me and make my 3D dreams come true. Sarah’s near future, 2041, luxurious high gloss aesthetic and sets were so on point — I'm still gagging over the black sea of water.

My stylist Marita Owens and I knew we wanted to go for a Miami Vice City, high ticket, expensive, badass femme boss. Think clubs, body, beaches and pieces. Lots of black leather, pops of neon colors, and a girl’s best friends: silver and diamonds. A mix of iconic archival pieces from OG designers like McQueen with what’s currently hot right now — Mowalola, Kara, Area, Telfar. Subtle nods to MISBHV's SS20 jewelry collection. Sarah completely nailed it with the hyper-length acrylics. All of our aesthetics melded so perfectly, evolving into the video into what you see today.

All the looks go hard, but I especially love the Telfar bag cameo. Tell me more about that choice.

I absolutely love everything about Telfar, I haven’t been able to snag a mini bag for myself yet because they’re always out of stock sadly but in my virtual world, of course I’d be sporting a Telfar bag because it’s such a chic staple piece. Telfar is black-owned, and to me it’s important to wear companies that are for you and by you. It embodies black power and the pieces are truly iconic, foundational, and cute.

What do you think about the rise of fleshed out digital avatars like Lil Miquela?

I think the new fad for digital avatars comes from the new age of social media and how people perceive most influencers, like they’re untouchable, they’re unreal, or “out of this world”. But now that Lil Miquela makes music of her own, she might shake a few tables and give the girls a run for their money even though she isn’t “real.”

“Wild” is a pretty sexy song. What’s the story behind it?

Around the time we originally recorded “Wild“ it was April in Spring 2019 and I wasn’t expecting anything less than great for the session with NickyDavey, but I wanted a track that would wow people, bring something they could move to and playback at any party of the summer.

How was working with NickyDavey?

Working with NickyDavey was truly inspiring, the guys were just so down to earth and easygoing. We bonded instantly on their work with Syd from the ever-so-amazing band The Internet, Philly slang and culture especially, and that’s ultimately how we started to build an idea for the track. Once we started writing we just bounced off each other like pings.

You’ve talked about how you used to be shy about expressing yourself when you were a teen first making music. Do you still have to combat those feelings?

I've definitely grown into myself since being a teen, way more confident and vocal. Expressing myself is never an issue, but I do combat nervousness and anxiety sometimes while performing, but I think that’s just the natural excitement that is instilled when you’re doing something you love and never get tired of it.

You’re a proud Philly girl. What do you hope your music will bring to your hometown?

Yes, I am a proud Philly jawn and I just hope my music brings recognition for all the rising singers and songwriters like myself that look up to our pioneers like Jill Scott, The Roots, Musiq Soulchild, and so many more who originated The Sound of Philadelphia because we tend to get lost in the cracks. For us to be more amplified just as much as the MCs and rappers that come from this city. I always wish for togetherness and a tighter community, and I’ve seen music bring strangers together. That’s what I hope for.

What should fans expect from your forthcoming EP? If you had to distill Lovergirl into a thesis, what would it be?

Honestly, I want my listeners and fans to expect a new experimental sound from me but in its truest and funnest form. A lot of these songs came together just from good collaborative energy and being in a good place mentally and emotionally and that’s important if you’re putting out something that you want people to resonate with, and it’s also giving the universe a big thank you.