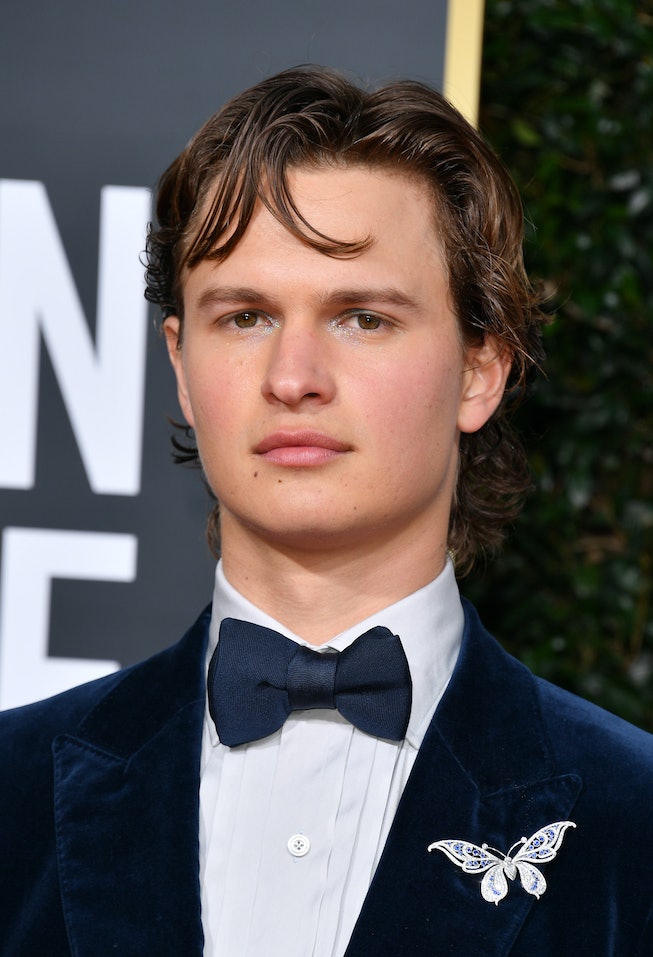 For the past few years, I've been developing a working theory about "The Young Hollywood White Twink Brigade," a group of mid-20s actors that includes three Golden Globe nominees (Timothée Chalamet, Lucas Hedges, and Ansel Elgort) and Marvel's resident Spider-Man (Tom Holland) among its ranks. According to my belief, these four actors, who are all talented in their own right, will be duking it out in the race to become Hollywood's next go-to Leading Man for years to come. And while I am a noted fan of all four of these men, I've always held a special candle for Ansel Elgort. Sure, he may not have a Marvel-worthy salary or the once-in-a-lifetime acting chops that frequently get him categorized as the next Daniel Day-Lewis. But what he does have is a prosperous backup career as a singer and a willingness to completely make fun of himself for no apparent reason. (Remember when he filled his Instagram grid with 17 different shirtless selfies and refused to explain why?) There are are many reasons to love the charming Baby Driver actor — who will next be seen as Tony in Steven Spielberg's West Side Story before starring as an American journalist in HBO Max's Tokyo Vice crime drama series — and today, the 26-year-old gave us one more to add to the list as he stripped down to...well, nothing — all in the name of charity.

Late this afternoon, Elgort posted a picture on Instagram that left very little to the imagination. Wearing nothing but a thick chain, it showed the actor taking an outdoor shower while using his hand to barely cover up his crowned jewels. No details about the photo were given, but judging by a tag that linked back to the profile page of his photographer father, we can assume that the photo was taken by his dad (which is, admittedly, kind of weird but I'll ignore that fact for now).

In the caption, Elgort quickly caught the general public's attention, writing "OnlyFans LINK IN BIO," implying that he had abandoned his current career as an adult actor to become an actual "adult actor." That it appeared underneath a picture prominently showing him in the nude didn't help but matters. But those (like me) who quickly went to search for said link were pleasantly surprised to instead find one that linked to a GoFundMe page for "Brooklyn For Life!" — a charity raising money to fund local restaurants struggling due to the ongoing coronavirus pandemic. With the money raised, the charity helps these restaurants make meals that can then be delivered directly to those people working on the frontlines, like hospital doctors and nurses. And while I certainly wouldn't have minded finding a real OnlyFans link in his bio, I'd be lying if I said I wasn't more excited to see this link there instead. Sure, he's trolling, but it's all for a good cause!

Get a whiff of Ansel's jewels in his thirst-trap-for-a-cause below.