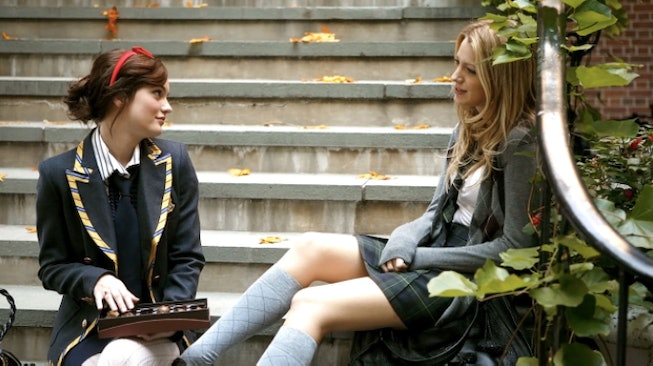 Who cares if it's only been two weeks since Quibi launched? It's the Streaming Wars and we already want more! So it should come as no surprise that we're moving right along as HBO Max, the next high-profile streaming platform to launch this year (but not the last, as NBC's Peacock eyes a summer release), sets a release date of May 27th. In a little over a month, we will have a whole new platform that houses not only the classics that already exist in HBO's prestige-ready library — including everything from The Sopranos and The Wire to Veep, Curb Your Enthusiasm, Girls, and Insecure — but also select titles from WarnerMedia brands including CNN, TNT, TBS, truTV, Turner Classic Movies, Cartoon Network, Adult Swim, Crunchyroll, Rooster Teeth, and Looney Tunes.

But it somehow doesn't stop there. HBO Max will also be the exclusive home for some of the nation's most beloved shows (think Friends, Big Bang Theory, and South Park) as well as for movies from Warner Bros., New Line, and DC (think Wonder Woman, When Harry Met Sally, Joker, and Casablanca). And while it will be great to finally have an easy way to revisit the entire beloved filmography of Studio Ghibli's animated classics, I am most looking forward to the library of new original content that will roll out on the platform over the next few months, including films (narrative and documentary) and TV shows (scripted and unscripted). Among these are a Friends reunion special, featuring everyone from the main cast; Legendary, a reality ballroom competition show, judged by Megan Thee Stallion, Leiomy Maldonado, and Law Roach, MCed by Dashaun Wesley, and (somewhat controversially) hosted by Jameela Jamil; Let Them All Talk, a new Steven Soderberg film starring Meryl Streep as a celebrated author traveling with some old friends and her nephew (Lucas Hedges) on a life-changing journey; and Hot Dog, a reality series that, like its title suggests, will pit dog groomers against each other as they compete to make their dog the hottest of the bunch.

Below, find the five new projects we are most looking forward to.

Girls gave HBO its first truly viral millennial comedy, so it's safe to say that HBO is bound to Lena Dunham forevermore. Though the less said about the 2018 trainwreck Camping, the better, things look far more promising for Generation, the creator's next project with her longtime network partner. Like Girls, Generation will function primarily as a dark sex comedy, placing a special focus on technology and social media as a means to exploring the attitudes about sexuality in young people. But unlike the Golden Globe-winner's breakout series, Generation will focus on a group of high schoolers rather than a set of young adults, while trading in the liberal ethos of Girls' gentrified Brooklyn for the conservative restriction of a small town. More excitingly, the show was created by an actual teenager — 18-year-old Zelda Barnz, who developed the project alongside Dunham — a detail that will hopefully result in a story that feels accurate to the true lives of teens. Barnz' involvement is already paying off: early on, the teenager decided to "represent queerness in my generation" in a way that openly acknowledges the fact that 40-percent of Gen-Z identify as such. The young cast mixes established actors with promising newcomers — like The Get Down's Justice Smith, Ocean 8's Nathanya Alexander, Kevin (Probably) Saves the World's Chloe East, The King of Staten Island's Chase Sui Wonders, Teen Wolf's Michael Johnston, and True Blood's Sam Trammell.

Perhaps the most exciting project audiences are looking forward to is the as-yet-titled Gossip Girl reboot (or sequel, depending on who you ask). Created by the same team behind the original series, but featuring an entirely new set of characters (except for Gossip Girl herself, who will still be portrayed by the original's Kristen Bell), it has quickly become the hottest ticket on HBO Max's original slate — especially with showrunner Joshua Safran promising that this version of the show, which will focus on how technology and social media have impacted the way teens interact with each other, will be more diverse (in terms of race and sexuality). Given the fact that the show was still confirming its cast (which, yes, features Tavi Gevinson) at the beginning of quarantine, there is virtually no chance of this reboot being ready in time for HBO Max's May launch, but with any luck, the show, which will air ten episodes in its first season, will still debut sometime before the end of the year.

Right now, Issa Rae is unveiling new episodes for the fourth season of her breakout HBO sitcom Insecure, but soon all eyes will be focused on Rap Sh*t, a new comedy that the multi-hyphenate will write and executive produce. Following an all-girls rap group from outside Miami, the series will track their progress as they try (and fail) to break out in the city's highly competitive rap scene to make it big in the music industry. Further details about the show are scarce, but if Rae's proven ability to tell compelling stories about young adult women of color — not to mention, her clear interest and excellent taste in music by rising hip-hop artists — is anything to go by, it's safe to say that we are in good hands for this new music-minded comedy series.

During its first two seasons in 2016 and 2017, Search Party was one of the best comedies on television. The hilarious millennial-minded murder mystery follows Alia Shawkat and her band of friends (including Stranger Things' John Reynolds as her on-again/off-again boyfriend, Meredith Hagner as her self-absorbed best friend, and scene-stealing comedian John Early as the show's constant source of comic relief) as they try to figure out what really happened in the sudden disappearance of their former college classmate. Unfortunately, TBS put the series on hold ahead of season three, leading to a three-year delay, during which it hopped networks and eventually landed at HBO Max. Thankfully, the streaming service also used that time to give the show a fourth (and possibly final) season order, a decision that will hopefully translate into a shorter gap separating these next two set of episodes.

As Euphoria's Kat, model, actress, and Becca Cosmetics spokeswoman Barbie Ferreira became an instant fan favorite for a show chock full of them. Now, as we await more details regarding the upcoming second season of that HBO sensation (which may or may not feature an appearance by Azealia Banks), we can at least get excited for the release of UNpregnant, a Missouri-set coming-of-age film that will also serve as Ferreira's first feature role. Based on the novel of the same name, the film follows Veronica (The Edge of Seventeen's Haley Lu Richardson), a promising high school senior whose unplanned pregnancy threatens to derail her carefully lain-out plans to attend an Ivy League college and pursue her career. Left with no other options except abortion, the 17-year-old is forced to mend a relationship with her ex-best friend (and current school outcast), Bailey (Ferreira), as the pair embark on a life-changing three-day road trip that takes them 900 miles away from their small conservative hometown to the closest available clinic.

Check out a teaser for HBO Max below and strap in for the May 27th launch.