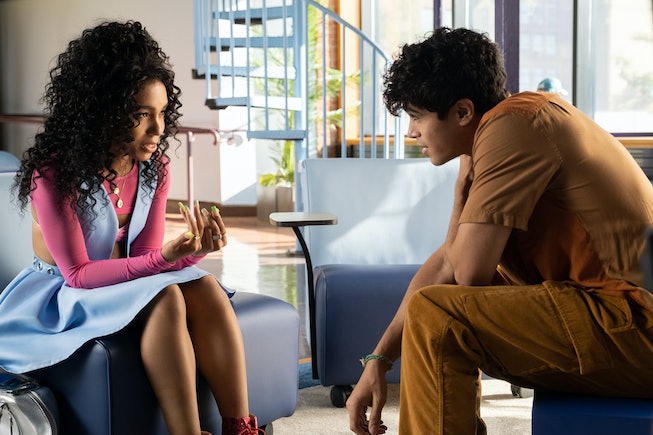 This year is set to be a landmark one for queer cinema, particularly when it comes to glossy features backed by major studios. Shortly after Hulu releases Fire Island this week, Prime Video will push out Keiynan Lonsdale’s My Fake Boyfriend. Later this year, Billy Eichner will get some bonding time with his Bros when it hits theaters, and Harry Styles will have a bisexual cop moment with Emma Corrin in My Policeman. It’s clear 2022 will bring an embarrassment of riches when it comes to LGBTQ+-centered stories on the big screen — and that’s before we’ve even had time to discuss Anything’s Possible, the directorial debut for the Emmy and Tony-winning actor Billy Porter, which just received its first trailer.

Described as a “delightfully modern Gen Z coming-of-age story,” Anything’s Possible follows Kelsa, “a confident high school girl who is trans, as she navigates through senior year.” The film focuses on the developing love story between Kelsa and Khal, her classmate. “When Khal gets a crush on her, he musters up the courage to ask her out, despite the drama he knows it could cause. What transpires is a romance that showcases the joy, tenderness, and pain of young love.”

Originally titled What If?, the Orion Pictures release was written by The Kiss List’s Ximena García Lecuona and stars promising actress Eva Reign, in her big-screen debut, as Kelsa. (“It felt kind of strange walking into all of this because everyone else in the cast, they’ve all gone to like Carnegie Mellon or Yale, and they’ve been on Broadway,” the actress recently told Variety about her experience filming on set. “And I’m like, ‘Yeah, I took classes in the Village.’”)

The first trailer for Anything’s Possible certainly keeps the John Hughes-meets-Gen Z vibes strong, kicking off with a conversation between Kelsa and her friends about the best way to tell when you have a crush on someone. Their consensus on the most telltale sign? “I have a theory,” says one friend. “First Insta story is the person you’re thirstiest for.” (Kelsa’s, of course, is Khal.)

The rest of the trailer promises plenty of cutesy teen love moments: Kelsa laughing when Khal accidentally texts her a weird picture of his face, Khal bringing Kelsa a bouquet of flowers at lunch, both of them asking each other out on a date at the exact same time (in the exact same awkward way), etc. And luckily for us, the chemistry between leads Reign and Ali is palpable, already jumping off the screen, even in this small little preview.

Set to premiere on Amazon Prime Video on July 22, Anything’s Possible will help ensure that the spotlight on queer culture, and on our stories, extends well beyond the recently-started Pride Month. “This is an aspirational story. It’s almost like a fairytale,” Billy Porter told Variety about his decision to tell this particular story in his first directorial effort. “It’s a look at what we can be. That’s what we as artists get to do — look at what we can be and what we should be.”

A beautiful story that centers queer joy? Sign me up.

Check out the heartwarming trailer for the upcoming movie below.