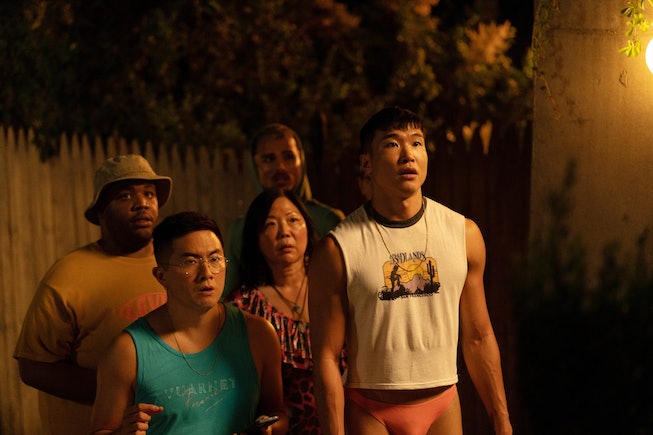 Every summer, the gay men of New York City embark on an annual trip to their version of Mecca: Fire Island. The thin barrier island off the coast of Long Island is home to Fire Island Pines, known as the backdrop for beautiful beach days, glorious dancing, historic benders, and now, the highly anticipated queer rom-com Fire Island.

Coming to Hulu on June 3, Fire Island is Pride and Prejudice for anyone who partakes in poppers culture. Written, produced, and starring Joel Kim Booster, the comic got the idea for the film partly from reading the celebrated Jane Austen novel during his first ferry trip over to Fire Island in 2016, and partly from an acid-fueled night during the end of his stay.

"I know it sounds so stupid: 'You did acid on Fire Island and it changed your conception of self,' " Booster told Entertainment Weekly. "But it really did move the needle towards self acceptance in a huge way." The LSD made his inside joke seem totally feasible, and fast-forward six years, Fire Island boasts a stacked cast — including Torian Miller, Tomás Matos, Margaret Cho, Matt Rogers, and Bowen Yang — and also serves as a touching tribute to chosen family and Booster’s friendship with Bowen.

In Fire Island, Booster takes on Noah, the Elizabeth Bennet-esque character who travels to the Pines for a weeklong getaway with his best friends, including Yang’s Howie. While Howie at first feels isolated and “terminally alone” in the island’s extremely white and classist events, he falls for a cute doctor (figuratively and literally, since this is a rom-com, after all), and opens up the friend group to a new group of men, including the film’s Mr. Darcy figure (Conrad Ricamora).

Much like Pride and Prejudice, the romance in Fire Island follows the tried-and-true enemies to lovers pipeline. After the gang is invited to the doctor’s beachfront house, and then promptly dissed by his snobby friends, Noah overhears someone snidely suggest that his friends are using the house for free liquor. Cue the love triangles and subtle, flirty looks and exchanges!

Fire Island was announced in July 2021 and features an entirely LGBTQ+ main cast. "My first big one out of the gate and I did it with my best friends in the world, in one of my favorite places in the world," said Booster to EW. "I just don't know that there will ever be an experience like this for me in the rest of my career. I can hope, but I highly doubt it."

Watch the trailer for Fire Island, below.

NEXT UP
Culture
Phoebe Dynevor Will Not Return for Bridgerton Season 3
Culture
Succession Season 4 Trailer Explodes With Family Drama
Culture
The Madonna Biopic Is Being Scrapped
Culture
Kaia Gerber Won’t Stop Until She’s Cast As Patti Smith In A Biopic
Style + Culture, delivered straight to your inbox.