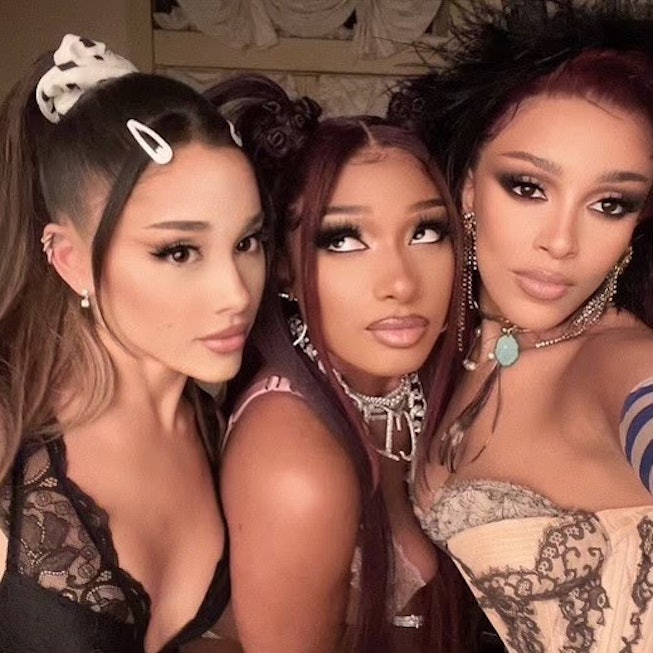 Can we just say it? Ariana Grande, Megan Thee Stallion, and Doja Cat deserve to be pop's new (un)holy trinity. The three pop stars just unveiled their luxurious "34+35" (Remix) music video, in which they do absolutely nothing but serve immaculate looks and aspirational lifestyle goals, which is really all I'm looking for from an iconic celebrity trio.

The sparkly pop song may be an ode to the internet's favorite sex position, but there is nary an NSFW body part shown in its accompanying video. Instead, the three friends — and they do actually give off surprisingly authentic friendship vibes — roam around an empty but absolutely palatial hotel, lounging by the pool, throwing back flutes of champagne, and twerking on gleaming luggage carts. At the video's mid-point, the music stops as Grande goes to order more bubbly, french fries, and an unspecified flaming dessert through the room's intercom service, all while dressed to the nines in black lacy lingerie. Absurd? Surely. But serotonin boosting? A resounding yes.

The "34+35" Remix video precedes the release of Grande's positions deluxe album, which is set to arrive on February 19. The revamped collection of songs will include five new tracks including the "34+35" Remix. Fans have been speculating which artists might be featured on the new tracks — including throwing SZA's name into the mix before she later debunked the rumor — though nothing has been confirmed by Grande.