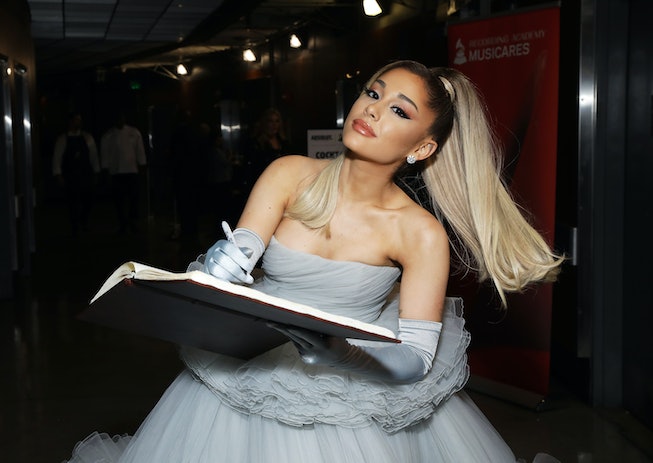 Photo by Robin Marchant/Getty Images for The Recording Academy

The time for hints and coded language are over: Ariana Grande officially announced that she's releasing her new album, colloquially known as AG6, this month.

The singer has been dropping hints about new music since early quarantine back in March, careful to give just the right about of intrigue and mystery to send her fans into a frenzy with each clue. On March 24, she indulged her Instagram and Twitter followers in her favorite past time, by which I mean releasing a 45-second teaser clip of a track allegedly titled "Nasty." The track opened with some of Grande's celebrated whistle notes and lived up to its apparent title. "I just wanna make time for ya / Swear it's just right for ya / Like this pussy designed for ya," she sings over the twinkling production.

Grande kept it brief regarding the song, letting fans wonder if it was simply a quarantine gift or a taste of music to come. "i miss making things can’t wait to get back to work but for now let’s stay inside pls," she wrote.

Grande got back on the teaser wave September 14. She posted a clip of her mixing her angelic harmonies, captioning the video with a succinct "brb." Knowing Grande's dedication to lowercase letters, it could very well be a song title.

After months of only posting hyper-short clips, Grande finally came in with something concrete. "Turning in these mixes and reminding u again to register to vote if u haven’t already / to vote early," she tweeted on October 7. With the mixing process as one of the final steps toward album completion, fans knew that AG6 wasn't too far off.

Days later on October 10, producer Tommy Brown — better known as Grammy-nominated producer TBHits — dropped a throwback pic from October 2018 when he and Grande wrapped her seminal breakup record Thank U, Next. The throwback came with a little surprise caption: "6****." An album hint from a new source!

Additionally, fans have been theorizing that the scrapped Thank U, Next track "Remember" might be making its official debut on Grande's new record. The singer replaced the song (which is allegedly about her deceased ex-boyfriend Mac Miller) with her blasé bad girl single "Break Up With Your Girlfriend" after deciding it was too personal.

Grande didn't wait long after Brown's clue to confirm what sleuthing fans have been trying to corroborate for months at this point. "i can’t wait to give u my album this month," she tweeted on October 14. October famously has 31 days, meaning the new music could drop at literally any second. Grande has a talent for keeping her fans on her toes; Thank U, Next was conceptualized, record and released in six months, and now a two-week warning has only heightened the stakes.