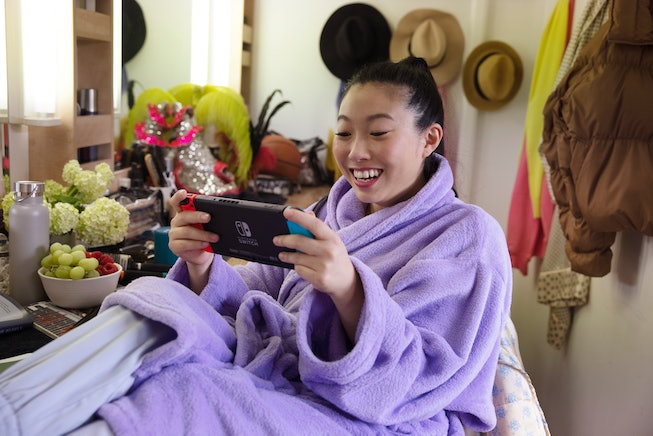 A Nintendo Switch may have been the hottest thing to own when lockdowns restrictions swept the world earlier this year, but Awkwafina was riding the gaming wave way before we found ourselves in the midst of a global pandemic. The actress, born Nora Lum, was gaming hard during the filming of the feel-good blockbuster Crazy Rich Asians; Lum coordinated Mario Kart races in her Singapore hotel room with her co-stars, and it goes without saying that they were a major success in cast bonding.

Lum’s love of Nintendo goes back to her childhood. She rocked with every iteration of the gaming system growing up, and when the pandemic forced her indoors, her Switch became an unlikely tool for connection. The outside world may have been on pause, but through her Switch Lum was able to fly over to her friends’ islands in Animal Crossing: New Horizons and game against her cousins in Mario Kart 8 Deluxe. Ultimately, she found the Switch’s social capabilities to be therapeutic as hell: “It almost gave you that feeling like when you're playing with all your friends on the couch, even though you're not.”

Ahead, Lum hopped on the phone with NYLON to discuss her favorite Mario Kart strategies, judging her friends’ island set-ups, and how Nintendo is a fixture in her life.

When did you get your Switch, exactly? Did you have it for lockdown?

I actually got my first Nintendo Switch when I was filming Crazy Rich Asians in Singapore. I set it up in my hotel room. And it was very fun, because I was able to play with the cast. I had the cast come over and play. I also got a new Joy-Con recently, so I guess it feels like a new Nintendo Switch.

I love that you can swap it out based on your mood. Sometimes I’ll go goth with all black, and another time I'm in the mood for pink.

Yeah, exactly. Do you play?

Oh yeah, I have my own Switch, and I love it. It's the best thing that I've ever had.

Yeah. It's definitely a necessity, I think, for where we are right now.

What are your favorite games you’ve played so far?

Definitely Animal Crossing: New Horizons. I've been getting really into Mario Party Deluxe. I'm repeating it again. But then I also like Jeopardy! a lot. Do you play Animal Crossing, too?

Yeah, I clocked in so many hours over lockdown on Animal Crossing. It came out at the perfect time, and I was just building, planting, fishing all the time. I haven't logged on for a while though.

It did come out at a great time. It's always devastating when you are logged off, and then you go back on, and it’s overgrown.

Your villagers get pissed, too. They're like, "Where have you been? You've been in your room this entire time." And you're like, "Uh..."

They’re like, “Have you been welding a body suit, or something?” [Laughs] I have one villager that gives me awesome gifts, and the one that just continues to give me tanks tops. And I'm like, "I don't need any more tank tops! I'm good."

One of my villagers once gave me a moldy dress, and I was like, "Thanks, babe. Okay. I see what you think of me."

Did you ever get a five-star Island?

No, I got the three stars for getting K.K. Slider, but I'm working on it. One thing that I was doing when I first got it was just visiting everyone's islands. And you could really see who's a true psychopath, you know? And who also just...doesn't live right. [Laughs] It's like, "This is how you set it up? All right." It's definitely a good way to judge people. When you go into people's houses and you judge them from their houses, it's like the same thing.

Did the Switch help you keep sane during lockdown?

It was definitely a fixture of my life during that time. It was very therapeutic for me, actually. Being able to also use it to connect by going to my friends' islands, and then also being able to play Mario Kart 8 Deluxe with my cousins. It really was a cool way to connect. It almost gave you that feeling like when you're playing with all your friends on the couch, even though you're not.

Is this your first Nintendo console?

Nintendo has been a part of my life since I was a kid. I was obsessed with Donkey Kong. I played Super Nintendo. I played all the systems. I had Game Boy Pockets. I had all of them. It's just really cool that it came full circle and I continue to use it in my adult life.

Actually, I had to go and research this, but it's Baby Mario. Because, scientifically, there's a theory that he's like the smallest, so your cart goes faster with him in it.

He's aerodynamic! And it's true, because I am slaying right now. [Laughs] Baby Mario flies, dude. But otherwise, I think it's great that they added Isabelle. I love whenever there's the Animal Crossing crossovers. There's an Animal Crossing level in Mario Party Deluxe, it's so awesome.

Isabelle is actually my go-to pick because I love when she looks back at people after she passes them and waves. And then when the race ends, she has her little flower aura around her, and she's just vibing.

Oh, no. It's going to make me more mad at her when she wins.

Would you ever consider streaming on Twitch?

100%, yeah. I don't think I'd be adequate, not as a player, but as a personality. Because I can't talk and race at the same time. And then I wonder like, would this go under the experts? Are you here, do you think I'm an expert? And then you're going to hate me, because I'm not? So there's a lot of my own neuroses when thinking about that. But yes, I would.

Put a disclaimer out: "Not a professional, just a lover."

Yeah. Just remember also, I don't talk and engage. So just be prepared to sit in total silence [Laughs].