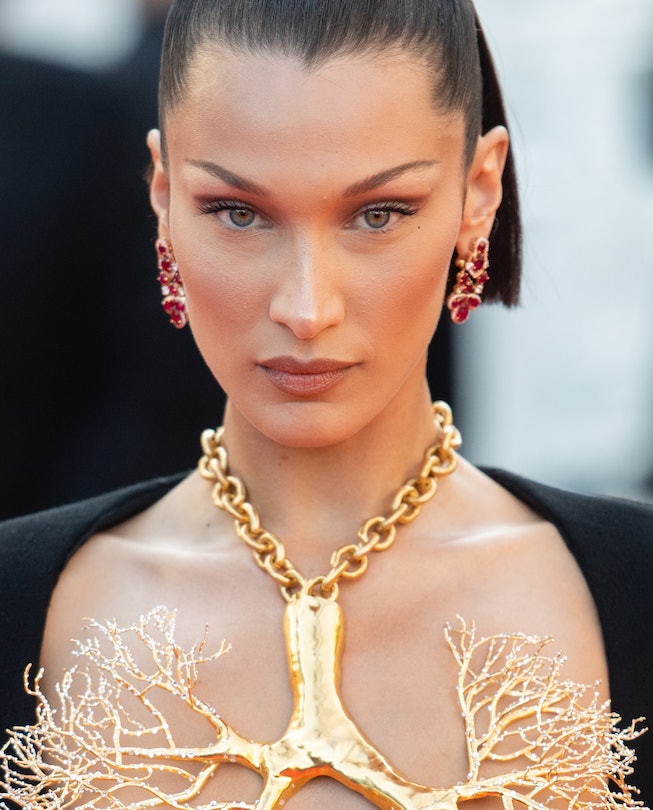 Bella Hadid may be known for her photo-ready style, but lately, the supermodel has avoided the press. In a new interview, Hadid explained why she stopped working with a stylist and opened up about Instagram’s effect on her mental health, especially over the past few years.

Back in November, Hadid posted a series of teary-eyed selfies on Instagram. The since-deleted pictures were a shock to her 48 million followers, who are used to the model’s perfectly structured posts. Along with the photos, she wrote, “This is pretty much my everyday, every night, for years now. Social media is not real. For anyone struggling, please remember that. Sometimes all you’ve gotta hear is that you’re not alone. So from me to you, you’re not alone. I love you, I see you, and I hear you.”

In a post promoting her Kin Euphorics beverage brand last fall, Hadid addressed her mental health struggles again, saying she has “suffered from extreme depression and anxiety” for most of her teenage and adult life.

“My social anxiety was something that slowly crept up on me as I grew into my twenties. It got harder for me to go out without having one drink to calm my nerves, which made me not want to go out at all, so I was just hibernating between jobs.”

She added, “With a life that is constantly pushing a social regime, along with working 13 hour days, every single day, I knew this wasn’t a sustainable life for me.”

Hadid told the Wall Street Journal why she took (and shared) the photos. “I would have really depressive episodes and my mom or doctor would ask how I was and instead of having to respond in text, I would just send them a photo. It was the easiest thing for me to do at the time because I was never able to explain how I was feeling,” she said. “I would just be in excruciating and debilitating mental and physical pain, and I didn’t know why. That was over the past three years.”

By uploading the images to Instagram, Hadid was able to spark an important conversation about mental health while working on her own.

She then disclosed her reason to stop working with daily stylists. In the interview, Hadid said she was “in such a weird place mentally,” that it was difficult to put outfits together and leave the house. Knowing that photographers were waiting outside to capture each look only made things more challenging, so instead of continuing the pattern, she decided to focus on herself.

“In the last year it was really important for me to learn that even if people talk about my style, or if they like it, or if they don’t, it doesn’t matter, because it’s my style,” she said. “When I leave my house in the morning, what I think about is: Does this make me happy? Do I feel good in this, and do I feel comfortable?”

Though she has since removed the photos and gone back to posting as usual, Hadid’s committed to being more authentic online. “I don’t know if that’s not what people want on Instagram, and that’s fine. I don’t have to be on Instagram forever,” she said. “I feel like real is the new real, and that’s what’s important to me.”