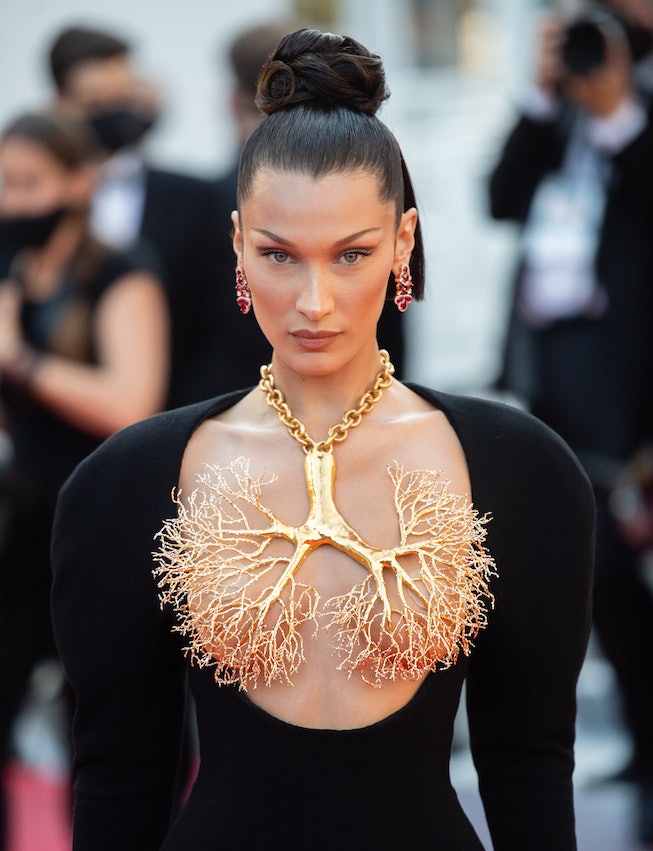 Bella Hadid is tired of people questioning her appearance, and, in turn, her worth.

In a new interview with Vogue the model and Kin Euphorics co-founder opened up about the toll working takes on her mental health and addressed the question that’s shadowed her career for years — has she had plastic surgery? As it turns out the answer is both yes, and no.

Over the past few years Hadid has been accused of altering her natural appearance to achieve a more sculpted, feline-inspired, look. However, during the tell-all interview the 25-year-old revealed that she had a rhinoplasty procedure when she was 14, but hasn’t made any alterations since then. She also said she regrets the decision.

“I wish I had kept the nose of my ancestors,” she said. “I think I would have grown into it.” Hadid vehemently denied claims suggesting that she’s had her eyes lifted, jaw shaved, or lips plumped up with filler. Instead, she insists her thinned out face is simply a result of aging.

“People think I fully f*cked with my face because of one picture of me as a teenager looking puffy,” she continued. “I’m pretty sure you don’t look the same now as you did at 13, right? I have never used filler. Let’s just put an end to that. I have no issue with it, but it’s not for me.”

As for the flawless cat-eye, she said, “Whoever thinks I’ve gotten my eyes lifted or whatever it’s called — it’s face tape! The oldest trick in the book.”

Hadid began modeling at 19, following in the footsteps of her older sister, Gigi. Throughout her career she’s appeared on at least 27 international Vogue covers, and has walked for a myriad of designers, making her one of the most sought after models in the industry. Even so, she admitted that the stress of being in the public eye, and the many critiques that come with it, has led to bouts of self doubt.

“I’ve had this imposter syndrome where people made me feel like I didn’t deserve any of this,” she said. “People always have something to say, but what I have to say is, I’ve always been misunderstood in my industry and by the people around me.”

As a result, Hadid explained that she put in extra work to earn her keep. “My immediate trauma response is people-pleasing,” she said, reflecting on a rough patch last year. “It literally makes me sick to my stomach if I leave somewhere and someone is unhappy with me, so I always go above and beyond, but the issue with that is that I get home and I don’t have enough for myself.”

Moving forward, Hadid said she’s practicing self care to maintain a healthy work-life balance. “To have to wake up every morning with this brain — it’s not cute,” she joked. “So now everything that I do in my personal life is literally to make sure that my mental state stays above water. Fashion can make you or break you. And if it makes you, you have to make a conscious effort every day for it not to break you. There’s always a bit of grief in love.”