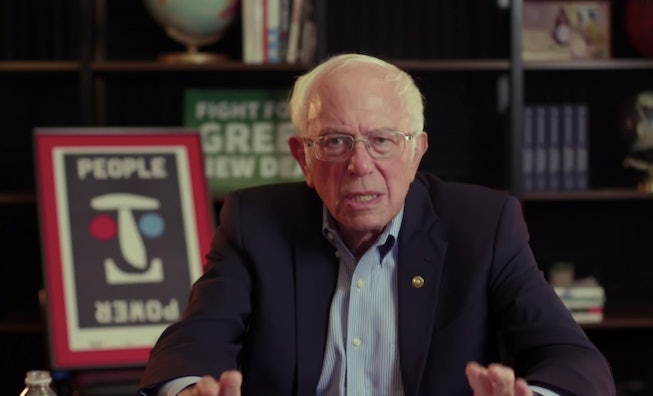 Bernie Sanders, America's long-disrespected politician, has the gift of critical thinking and foresight. Not many of his peers in Washington can say that! When Sanders was the guest on The Tonight Show on October 23 he spoke with Jimmy Fallon about how he thought election night would pan out. Spoiler alert: He predicted it to a tee.

"You're going to have a situation, I suspect, in states like Pennsylvania, Michigan, Wisconsin, other states, where they are going to be receiving huge amounts of mail-in ballots," he explained. "Unlike states like Florida or Vermont, they're not able — for bad reasons — they're not able to begin processing those ballots until Election Day, or maybe when the polls close. That means you're going to have states dealing with perhaps millions of mail-in ballots."

Sanders also noted one of the key differences between Democratic and Republican voters: Democrats are more likely to use mail-in ballots while Republicans are more likely to vote in person. Sanders warned that most likely the first votes to be counted would be in person votes, which would lead to Trump leading in the polls despite not all the votes being counted.

He explained that although no one knows what would happen, he knew of one potential possibility due to the electoral college system: "It could well be that at 10 o'clock on election night, Trump is winning in Michigan, he's winning in Pennsylvania, he's winning in Wisconsin and he gets on the television and he says, 'Thank you, Americans, for reelecting me. It's all over. Have a good day.'"

As of writing, votes are still being counted and we still don't know who the next president will be.