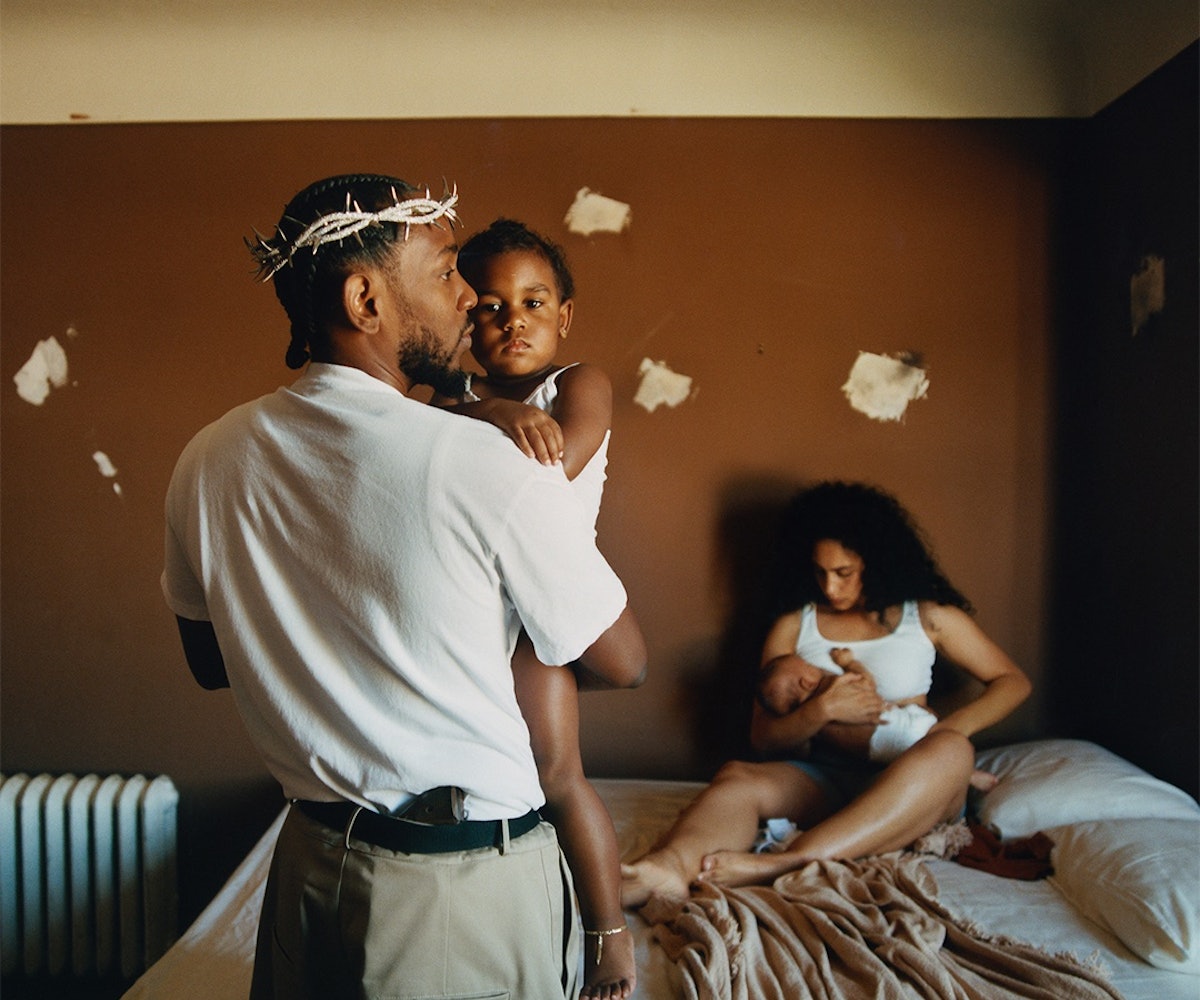 Kendrick Lamar’s swan song here. The acclaimed rapper’s latest project, and final album with his longtime label TDE, Mr. Morale & The Big Steppers, arrived on Friday to explosive excitement online. Following the release of his prelude single “The Heart Part 5,” the rapper continues on his deep excavations of love, fatherhood, generational trauma, and more on the album. At 18 tracks, it’s one of the densest, most complicated and personal projects of his to date, and there’s no doubt it’s primed to spark up more conversation in the coming weeks.

With contributions from a slew of supporting characters — including, controversially, Kodak Black on two tracks — the album doesn’t hold back from speaking its truth; some songs have already found resistance online, not least the song “Auntie Diaries,” which includes Lamar saying a homophobic slur several times as he weaves a story about a transgender member of his family.

Still, there are moments of intrigue and brightness throughout, particularly with its many features, including one bombastic, free-form “song” starring actress Taylour Paige. Lamar’s most poignant moments occur when he’s diving deep into his own psyche and flaws, holding them up in his hand for inspection, like an unpolished stone, trying to come to terms with the man he is and the man he wants to be.

Below, NYLON rounded up the record’s best tracks — the ones that are must-listens — either for ease of listening, surprising features, or functioning as a definitive breakthrough moment in the album. Dive in below, and follow along by streaming the record.

In comparison to DAMN., Mr. Morale & The Big Steppers has fewer straightforward pop moments. “Die Hard” from the first half of the album is one of the radio friendly tracks on the record, largely due to the sweet-voiced contribution from rising Bajan singer Amanda Reifer and the song’s more traditional structure. As Lamar raps about his difficulty in opening up in a relationship, Reifer embodies the song’s female perspective, contributing the song’s tender post-chorus, “Shimmy, shimmy, cocoa pop/ Serafina, flame in ice/ Where I'd be without your love,” she reassures. Singer and rapper Blxst adds his own melancholic spin to the song’s hook, making this track the album’s most melodic moment.

Flipping the tired trope of only women having daddy issues, Lamar excavates his own troubling relationship with his father on “Father Time.” Though he’s notoriously private about his personal life, Lamar featured his family on the album’s cover, revealing to the world that he’s now become a father to two children. In turn, there’s a lot of added weight to the songs’ ruminations about fatherhood, inherited trauma, and the growing up he still has to do. “Let's give the women a break, grown men with daddy issues,” he states. And with the addition of Sampha’s heart-wrenching croons as the emotional anchor on the song, “Father Time” shouldn’t be overlooked.

“We Cry Together” feat. Taylour Paige

One of the most intense tracks on the record, “We Cry Together” is Kendrick Lamar’s testament to relationships and one of his most experimental songs to date. Surprisingly featuring actress Taylour Paige of Zola fame who outstandingly holds her own, the song is essentially a screaming match between Paige and Lamar as they emulate a couple in the midst of an ugly fight, throwing insults at each other for nearly six minutes. “F*ck you, f*ck you, f*ck you,” they scream at each other repeatedly in one particularly heated moment. Paige, in a tirade about misogyny and the culture of toxic men, brings up everyone from Trump to Harvey Weinstein to R. Kelly. In response, Lamar calls her a fake feminist. All the while, discordant piano soundtracks the entire thing to maintain some semblance of song-likeness (incredibly, their insults are also rhymed). I’m still trying to parse exactly the point of it all, but one can’t deny that the song’s unforgettable — and Paige is an undeniable star in any role.

Perhaps some of the most quotable and eyebrow-raising lines appear on “Purple Hearts,” the album’s closest thing to a love song. Featuring Summer Walker and Ghostface Killah, the track is all about love, illicit substances, and spirituality. Walker substantially contributes to the song, adding a heavy R&B lean to the track, as well as some crazy one-liners including: “Now if it's love, I deserve to get some head on a balcony,” and “No, it ain't love if you ain't never eat my ass.” That being said, she sounds great, her vocals granting some much needed softness and dimension to the song. Killah, on the other hand, paints his version of devotion a little differently, framing his verse around God and higher powers. Overall, the ultimate point of “Purple Hearts” is made compellingly clear in one succinct lyric: “Shut the f*ck up when you hear love talkin'.”

Who would’ve guessed singer-songwriter Beth Gibbons of Portishead would be on a Kendrick Lamar record? Those more versed in TDE history probably don’t find it all that surprising; as music critic Craig Jenkins points out, Portishead was sampled on ScHoolboy Q’s 2012 song “Raymond 1969” so it was already in the family. Still, it’s a lovely surprise to hear her dulcet tone on the track, adding a gorgeous and ghostly contrast to Lamar’s most vulnerable bars.

“Mother I Sober,” the penultimate and longest song on the record, is a lyrical doozy, finding Lamar recounting painful memories from his childhood and within his family, including one charged moment of his family accusing his cousin of molesting Lamar. “Now I'm affected, twenty years later trauma has resurfaced/ Amplified as I write this song, I shiver 'cause I'm nervous,” he admits. There’s talk about drug addiction and the trauma his mother’s experienced, seemingly passed down generationally. Gibbons’ contribution is heartbreaking in its context: “I wish I was somebody/ Anybody but myself/ Ooh, I wish I was somebody/ Anybody but myself,” she sings.

But the song, a powerful expelling of his inner demons, ends on a hopeful note. Featuring the baby voice of his new daughter and his fiancé, Lamar looks for healing in the next generation. “You broke a generational curse/ Say "Thank you, dad,” his fiancé says at the end of the song. “Thank you, daddy, thank you, mommy, thank you, brother.”

Kendrick Lamar’s Mr. Morale & The Big Steppers is out now.

NEXT UP
Entertainment
Kendrick Lamar's "The Heart Part 5" Deepfakes Are Connected To Its Lyrics
Entertainment
Maneskin's "Supermodel" & 9 Other New Songs Out This Week
Entertainment
How Conversations With Friends Chose Mitski, James Blake & More For Its Soundtrack
Entertainment
Harry Styles' Harry's House Has Scatting, Cocaine & His Best Songwriting Yet