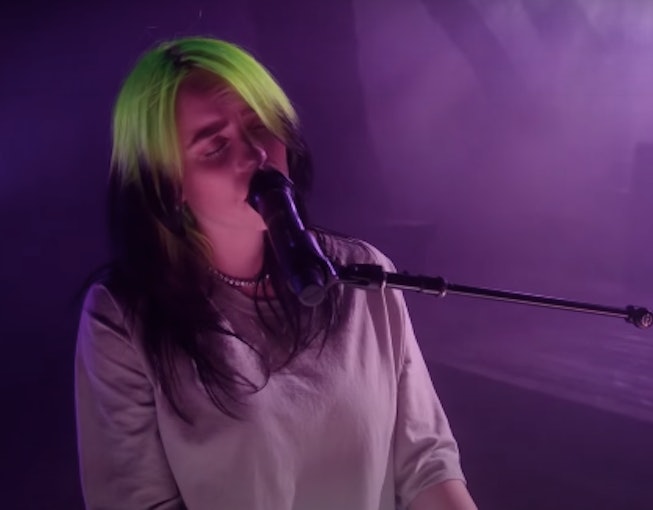 Another night, another round at the Democratic National Convention. Much like its previous evenings, democratic leaders from across the country hopped on Zoom with pleas to vote for former vice president Joe Biden and the ousting of President Donald Trump from office. The DNC didn't take any chances in their efforts to secure the Gen Z vote and enlisted the queen of the generation — one Billie Eilish.

Eilish followed the typical course of the evening, lambasting President Trump for his policies and inaction. "You don't me to tell you things are a mess. Donald Trump is destroying our country and everything we care about. We need leaders who will solve problems like climate change and COVID, not deny them," she said solemnly. "Leaders who will fight against systemic racism and inequality, and that starts by voting for someone who understands how much is at stake, someone who is building a team that shares our values."

One may ask, But how Billie? What can be done at this crucial point in history? Thankfully, the teen came with answers. "It starts with voting against Donald Trump and for Joe Biden," she said. Good to know!

Biden was officially nominated as the Democratic candidate for president at the convention on Tuesday night, while his running mate senator Kamala Harris got the official go ahead on Wednesday evening.

"Silence is not an option and we cannot sit this one out," continue Eilish, hammering in her support. "We all have to vote like our lives and the world depend on it, because they do. The only way to be certain of the future is to make it ourselves."

Along with her endorsement, Eilish played a relatively a new song at the DNC, the appropriately titled and extremely on the nose "my future." Her brother and collaborator Finneas and her dog also appeared in the video.