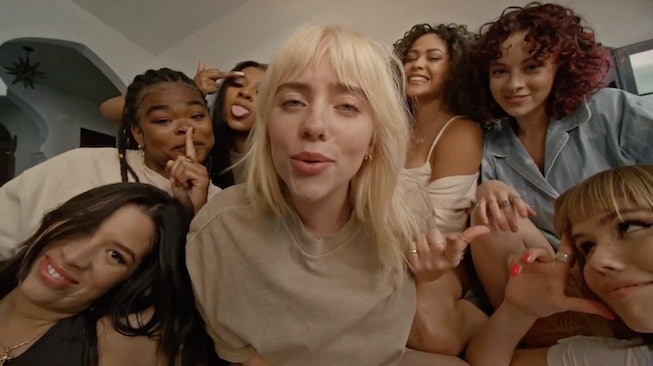 Billie Eilish’s era of isolated music videos is over. After years of using her videos as a solo space to explore all the trials she can make her body endure — make herself cry black tears, attach gigantic black wings to her back, extinguish cigarette butts on her body — the star is now welcoming other people into the Billie Eilish show through a tried-and-true pop star tactic: throwing a house party.

The star has released “Lost Cause,” her brand new song and video from her upcoming sophomore album, Happier Than Ever, out July 30. Unlike the sobering message of her last single, “Your Power,” “Lost Cause” turns to a more lighthearted topic: calling out inept men with no jobs and huge egos. For its music video, which Eilish also directed, she throws a (seemingly) SKIMS-styled slumber party for her friends that is either very much Hype House energy or reminiscent of Beyoncé’s “7/11,” depending on one’s preferred generational tag; they twerk on kitchen counters, spray each other with silly string, and dance around with Lays chip bags in hand.

Produced by FINNEAS, “Lost Cause” is Eilish’s version of a “No Scrubs” anthem, all minimalistic beats as she snarls her most scathing insults in a delicate whisper: “I know you think you're such an outlaw / but you got no job” — a line that’s all the more devastating coming from a globetrotting 19-year-old.

Posting about the track on Instagram, Eilish excitedly wrote that it’s “one of my favorites” and that “we had the time of our lives being hot & shooting this,” which makes sense; it’s the most carefree and teen-like we’ve seen her be, feeling herself unabashedly.

“Lost Cause” is the fourth single from Happier Than Ever, following “Your Power,” “Therefore I Am,” and “My Future.” Though the album was written during lockdown, it will decidedly not address the pandemic and instead will be “really just about what I feel like sounds good,” Eilish told Stephen Colbert. The star will also embark on a world tour in 2022 with 50 stops in North America and the UK/Europe.