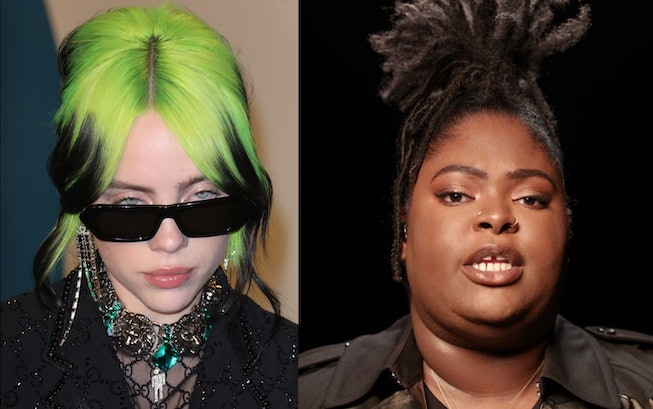 At this Sunday’s Grammy Awards ceremony, queer singer/rapper CHIKA could become the latest buzzy artist to take home the coveted trophy for Best New Artist. Last year, that honor went to Billie Eilish (who also nabbed four more trophies throughout the night), which means CHIKA would be in very good company if she won. And today, the Alabama-born artist bought herself some goodwill by releasing a cover of Eilish’s recent top-10 single, “my future.”

The new cover comes as part of Spotify’s just-launched weeklong campaign to shine a light on five of this year’s eight Best New Artist nominees. Each of the chosen potential winners was asked to cover a song by a previous nominee for the award. (Today, Phoebe Bridgers shared her cover of “Summer’s End” by John Prine, a nominee in 1972. Later this week, Noah Cyrus, D Smoke, and Ingrid Andress will all release their own covers.)

Speaking about her choice, CHIKA said, “I picked ‘my future’ by Billie Eilish as my cover for Spotify because the song is beautiful and presents an interesting opportunity to talk about where I am as an artist, especially on the heels of this nomination.” This year’s Best New Artist nomination is CHIKA’s first and only Grammy nomination to date, so her connection to the song makes perfect sense. “My present is moving so fast that each passing moment is practically the future already, she adds. “And I’m in love with the ride I’m on.”

Unlike Eilish’s original version, which is all slow-burning drama and soulful crooning, CHIKA’s “my future” cover takes the song to a whole new level. The artist even added her own rap verse to her rendition, where she mentions that her “future’s looking dreamy” — a declaration we certainly can’t argue with, as the artist continues to break down barriers in the realm of music while also nabbing her first IMDb feature acting credit in last year’s Netflix hit Project Power.

With the possibility of her first Grammy win on the horizon, CHIKA is pegged for an exciting week. She noted as much in a recent tweet, saying, “it’s not only my birthday week, it is grammy week, and EP week,” referring to the followup to last year’s career-launching Industry Games.

Check out CHIKA’s Billie Eilish cover and a reimagining of her track “U Should” below.