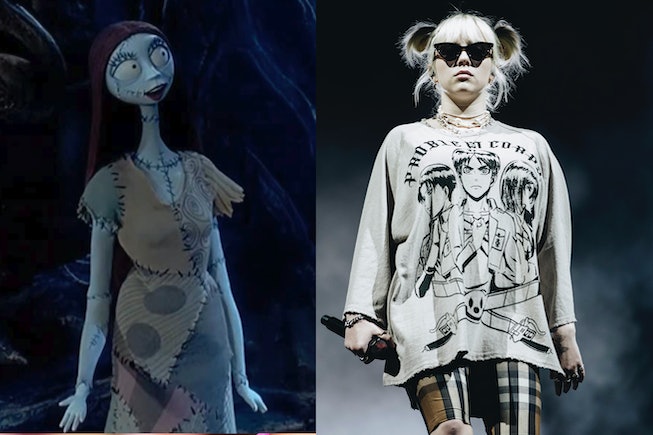 Billie Eilish is bringing her musical talents to the world of Halloween. The Happier Than Ever singer has officially joined Disney’s live-concert experience celebrating Tim Burton’s classic The Nightmare Before Christmas, for which she’ll perform a song as Sally.

The event is a concert-style performance of the musical numbers from the film. The Nightmare Before Christmas originally premiered in 1993, and became an instant classic. The animated holiday crossover follows the story of Jack Skellington — the pumpkin king of Halloweentown — who, per the synopsis, “has become bored with the same annual routine of frightening people in the real world.” When he accidentally discovers Christmastown, Skellignton is enamored by their way of living and kidnaps Santa Claus to take over his role. But he soon discovers that even the best plans can go “seriously awry.”

Eilish will perform “Sally’s Song” at the event, joined by Danny Elfman who is reprising his role of Jack Skellington from the original ensemble. “I’m absolutely thrilled to have Billie joining up with the nightmare crew. This will be a real treat (not trick),” Elfman wrote in a press statement. Eilish retweeted the announcement to her account, confirming her participation. The duo will be accompanied by acclaimed conductor, John Mauceri, for their performance.

It’s a fitting casting for several reasons, from Eilish’s haunting voice and aesthetic to her documented love of Burton. The 63-year-old director made an appearance in a video Eilish made for Vogue in May — asking Eilish, “If you were born and raised in Los Angeles, how come everybody else thinks you’re either from A), New York, B) London, or C) another planet?”

According to Variety, Elfman was originally hesitant about reviving the production and claimed this might be their last performance. “Every year I say this may be the last time. I don’t know how much longer I’ll do Jack,” he admitted to the publication. “There’s something about me that’s like, oh my God, am I back in this? But I know that I did want to do him at least one more time, last year, and I was really ready for that. And when it fell through, it was really hard. Jack is definitely good for one more round, so I’m really happy about that and excited.”

Weird Al Yankovic and Ken Page are joining this year's production as well, performing respectively as Lock and Oogie Boogie. The highly-anticipated show will run for two nights at the Banc of California Stadium in Los Angeles on October 29th and 31st. The film’s release date hasn’t been announced, but it will likely come before the end of the year.

Update — Billie Eilish’s performance of “Sally’s Song” is here. The singer made her debut performance as Sally in Danny Elfman’s live production of Nightmare Before Christmas on Friday, October 29 in Los Angeles, stepping out on stage in a very fitting, ragdoll-like designed dress.

Accompanied by an orchestra, her rendition of “Sally’s Song” is haunting and delicate, capturing the complicated emotions of the iconic song. Watch her performance below for one last spook before the holidays take over.

This article was originally published on Oct. 4, 2021