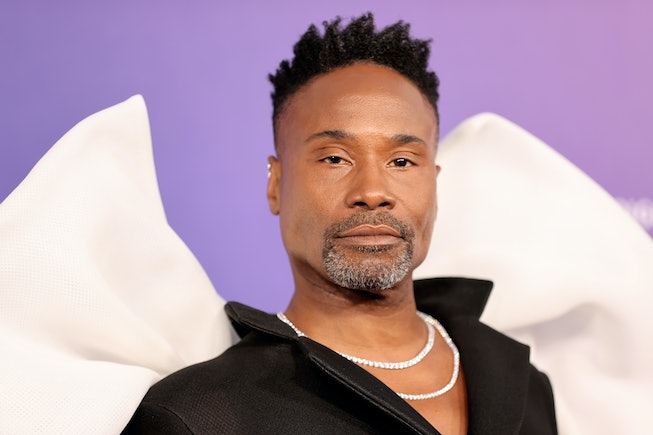 From 2018 until 2021, Billy Porter was best known for his transformative performance in a show widely appreciated for its boundary-breaking pedigree. As the firm but fragile Pray-Tell, a no-nonsense MC for the glittering balls at the center of FX’s Pose, Porter proved to be an undeniable force in front of the camera. Already a Tony winner for his performance in a different culture-shifting production (the 2013 Broadway revival of Kinky Boots), Porter would soon be adding another high-profile trophy to his mantle: a well-deserved Lead Actor Emmy for Pose.

Now, he’s ready to step behind the camera for a change.

This Friday, the decorated actor and singer will add another title to his ever-expanding résumé when Prime Video premieres Anything’s Possible, his feature directorial debut. (The Broadway veteran has directed for the stage in the past.) Starring newcomer Eva Reign and Katy Keene’s Abubakr Ali, the upbeat coming-of-age romcom tells the touching story of a confident trans high school senior (Reign) and the handsome but reserved classmate who decides to ask her out after being encouraged to by a group of well-intentioned strangers on a Reddit board (Ali).

After rising to national acclaim on a show that boasted what is still the largest cast of trans actors to ever appear on a scripted series, it’s no surprise that Porter is demonstrating a continued passion for telling empowering stories, even as he transitions into the next phase of his decades-long career. Taking a page from the tried-and-true playbook of the Coming-of-Age King John Hughes, Anything’s Possible is earnestly heartfelt but humorously lighthearted, presenting a love story that somehow feels both dreamy and grounded. But as Porter is quick to mention, his film is as much a loving ode to the genre as it is a necessary corrective. With “a cast that reflects what the world looks like today” and a central story that manages to find new shades within an already novel conceit (not satisfied with simply telling a story about any trans high schooler, Porter specifically wanted to focus on trans joy), Anything’s Possible is a terrific addition to the teen romcom canon and a great introduction to “Billy Porter, The Director.”

Ahead of the premiere of Anything’s Possible, NYLON hopped on a Zoom call with Billy Porter to talk about making the leap from actor to director, “taking control” to tell the stories he wasn’t seeing, working with first-time actress Eva Reign, why he found Ximena García Lecuona’s screenplay “inspiring,” and when he thinks he’ll be ready to direct a film that he also stars in.

How did you first get involved with the film?

I was just called and sent the script. D.J. Gugenheim and Andrew Lauren from [Andrew Lauren Productions], and Christine Vachon and David Hinojosa from Killer Films, they all had me in mind to direct the film, so they sent me the script. It was “for interest,” as they say in the business. But y'all know I'm interested!

You’ve been acting for decades. When did you first develop an interest in directing too?

I would say over 20 years ago, when I realized in the first decade of my career that I was not seeing the kinds of stories and the kinds of archetypes that felt human and specific to me. I understood at that time that I'd probably have to do it myself.

As an actor, though, much of your work has been for these kinds of stories, stories that are pushing the needle in some way, shape, or form. Is there something in particular you thought you’d get from directing that you hadn’t already gotten from simply acting?

Control. And it's not even really total control, because you’ve still got to deal with the studio. But in terms of narrative — in terms of controlling the narrative as a director — that vision is mine.

When you first developed an interest in directing, were you always envisioning a romcom?

Like I said, they called and asked me. So reading the script, what was so profound to me — particularly coming off of Pose, which is about a group of people who are traumatized but who decide to choose joy and love anyway — was that this story started at, We have joy already. Right? It's about trans joy. It's about that part of [the experience] from the start. You know, we've never seen that before, and especially in the bodies of teenagers. It's really profound.

Exactly. As you’ve hinted at, this film isn’t just a romcom, but it’s a queer coming-of-age story too. Was there anything about the latter genre that drew you in specifically?

Well, growing up in the time when the John Hughes movies were very popular, I remember loving those movies but also feeling distance from them because there was nobody in them that looked like me. So I had to superimpose myself onto these coming-of-age, joyful, romcom stories. So what I love about this one is that not only is it a coming-of-age romcom in the spirit of John Hughes, but it also has a cast that reflects what the world looks like today — and it's a brand new tale as a result of it. It's a brand new story as a result of it. We've never seen this before, and it's just thrilling.

The film stars Eva Reign, who is just phenomenal. I can’t praise her enough. You’d never assume this was her first big acting role. How was it to work with a lead who was so green in this space, especially considering that this was also your first time directing?

Well, you know, Eva came with the goods. She came ready. My great Aunt Dorothy, my grandmother, and my mama used to always say, "Stay ready so you don't have to get ready." And that's [Eva’s] middle name, honey. She came ready. All I had to do was guide. It was wonderful to see. It really, really was wonderful to be a part of it and to be able to be the person who could sort of usher her into this space and hopefully make her feel safe and welcome.

On Pose, you obviously weren’t directing, but you were acting alongside a ton of first-time actors (especially in season one). Do you think that experience had any bearing on your ability to work so seamlessly with Eva during her maiden voyage as an actress?

Yeah. I've been in the business for a really long time — over 30 years. I started directing for the theater over 20 years ago. And, I'm an actor. So I have a lot of experience with knowing how to talk to actors and helping to pull performances out of people that are necessary and great. And so, that was just fun. It's fun for me! It really is.

Would you say that directors who started out as actors have a unique advantage? After acting in the industry for over three decades, do you think you have a certain directorial style or any tricks that, maybe, another director without any acting experience wouldn’t?

The overall answer is yes. I am a successful actor, so I understand every single emotion that an actor goes through during the process, and I can tell what they're going through before they even say it. That's a leg up. The other thing is: during what I call the “valley period” of my life and my career, I had the pleasure of teaching, and teaching is where I learned the most about my own art. Teaching revealed so many things to me and gave me so many tools that I use to this day.

When you say that this movie reflects what the world looks like right now, I know you’re referring to the diversity of the cast. But I’d also say that statement holds true for other elements too, specifically the way social media is pretty much embedded into the fabric of the story. Kelsa is a YouTube vlogger, Khal is addicted to Reddit, everyone’s on Instagram. Finding a way to visually integrate social media into a movie isn’t always easy. How did you come up with a style for how it would look in your movie?

I worked with the visual effects people a lot. My DP, Andrei [Bowden Schwartz], had lots of ideas about how to shoot [the social media scenes] in ways that we could then layer onto afterwards. But [including social media] was necessary. It's like, there's a whole generation of people who have grown up in this world. The kids relate to each other differently now. And so, as a director who's trying to tell these stories, I had to really listen and soak up what that was all about from the kids who were there. There were lots of questions asked and answered from the kids.

I’m noticing a trend lately in romcoms where friendships are uplifted to the same level as the alleged “central” romance. In Anything’s Possible, the relationship between Kelsa and Khal is ostensibly at the center, but it feels like the movie is just as much about the fractured friendship between Kelsa and Em, or the one between Khal and Otis. Did you deliberately want to put romantic and platonic relationships on an equal playing field?

Well, I have to give that to Ximena [García Lecuona], who's the screenwriter. That [element] was already on the page. That speaks to her generation because she's still in her 20s and she wrote this from her perspective, right? It was inspiring, as Grandma, to see that the kids really do value their platonic friendships and understand the necessity of those just as much as romantic ones.

What was the most difficult part of your first time being behind the camera?

What would you say was the most fun aspect of it?

Directing! Actually being in the space and directing. It was bliss. Bliss.

If you were to direct another film down the line…

[cutting interviewer off] When I direct another film down the line!

I don't make those decisions. I allow the universe to present me with whatever I'm supposed to be doing. I've been in this business long enough to know that I don't have any control over that, and so I have to be open enough to let whatever it is in. So I'm waiting. I don't know. We'll see.

A while back, you told Variety that you “ain’t Barbra Streisand yet,” meaning you weren’t ready to direct a movie that you also were starring in (a la Yentl or The Prince of Tides). Looking towards your next project, do you feel like you’ve evolved on that front at all?

The short answer is yes. The longer answer is: I’ve still got some more work to do to figure it out. It depends on the movie! If it's just a regular drama or a regular romcom, then yeah, I could do it. But the more extensive, high concept stuff? No, I need some time.

Your movie is breaking boundaries and ushering in a new era for this genre. What do you hope the average viewer takes away after finishing Anything’s Possible?