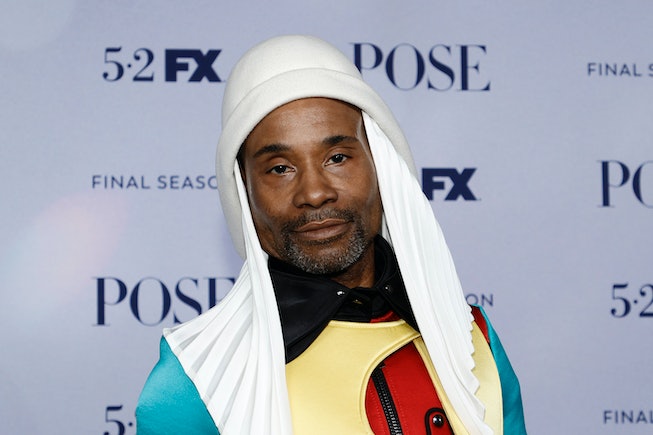 On FX’s Pose, former Broadway star Billy Porter gives an Emmy-winning performance as Pray Tell, a no-nonsense ballroom MC who, after finding out that he’s tested HIV-positive, takes a vested interest in the guerrilla tactics of LGBTQ+ activist and AIDS awareness group ACT UP. For years, Porter has imbued his complex character with unprecedented nuance and grace. But according to a recent feature in The Hollywood Reporter, there’s always been more to the story. Though hardly anyone knew, Billy Porter himself has been living with HIV for the past 14 years.

In an as-told-to-style story, Porter opened up about his diagnosis, his reluctance to come out about his status before, and what changed in his life that inspired him to tell the truth now.

Porter was first diagnosed in 2009, which he describes as “the worst year of my life.” At the time, the actor had been “on the precipice of obscurity for about a decade or so,” had been diagnosed with Type 2 diabetes, and even signed bankruptcy papers. Then, in the midst of all that, he was diagnosed HIV-positive that June.

According to the actor, he had been getting tested every six months leading up to the diagnosis, but only got tested then because of a pimple on his butt that “got larger and larger and harder and harder, and then it started to hurt.” While getting the pimple drained at the Callen-Lorde clinic, Porter answered yes to taking a $10 HIV test, at which point he was told that his results came back positive. As he explains, he was immediately hit with a wave of shame. “I was the generation that was supposed to know better, and it happened anyway,” he admits.

Though most people weren’t aware of Porter’s status until today, the actor says that, when he was diagnosed, “everybody who needed to know, knew” — aside from his mother, who he never intended to tell. “I was trying to have a life and a career, and I wasn’t certain I could if the wrong people knew,” he explains about his decision to keep his status to himself. “It would just be another way for people to discriminate against me in an already discriminatory profession.”

But after a year in quarantine — a period during which “everybody was required to sit down and shut the fuck up” — the actor finally felt ready to open up, and he credited some of that newfound confidence to his experience working on Pose. Just as Lola — the protagonist he played in Broadway’s Kinky Boots, which earned him a Tony Award — forced him to “practice forgiveness [to his dad and stepfather]” on stage, Pray Tell has provided Porter with “an opportunity to work through the shame [of HIV] and where I have gotten to in this moment.” “I was able to say everything that I wanted to say through a surrogate,” he admits.

Though Porter originally wanted to wait until his mother passed before opening up to the world, the actor started with her, spontaneously calling her up to tell her the truth on his last day of shooting for Pose. “You’ve been carrying this around for 14 years?” he recalls her asking after finding out. “Don’t ever do this again. I’m your mother, I love you no matter what. And I know I didn’t understand how to do that early on, but it’s been decades now.”

And thankfully, Porter feels like doing this for himself has really helped. At one point, Porter questions why, as someone who lived through the plague and saw so many in his situation die from the virus and a government that didn’t care, he was spared.

“Well, I’m living so that I can tell the story,” he responds to himself.

“Years of trauma makes a human being skittish. But the truth shall set you free. I feel my heart releasing. It had felt like a hand was holding my heart clenched for years — for years — and it’s all gone,” he shares about how he feels now that he’s opened up. “And it couldn’t have happened at a better time. Every single solitary dream that I ever had is coming true in this moment, all at the same time.”

NEXT UP
Entertainment
Emma Chamberlain Is Officially Moving to Spotify On February 23 (Exclusive)
culture
Anna Delvey Is Getting A Reality TV Show
Culture
Phoebe Dynevor Will Not Return for Bridgerton Season 3
Beauty
Dua Lipa’s ’90s Updo Is Hair Inspo For Your Next Night Out
Style + Culture, delivered straight to your inbox.