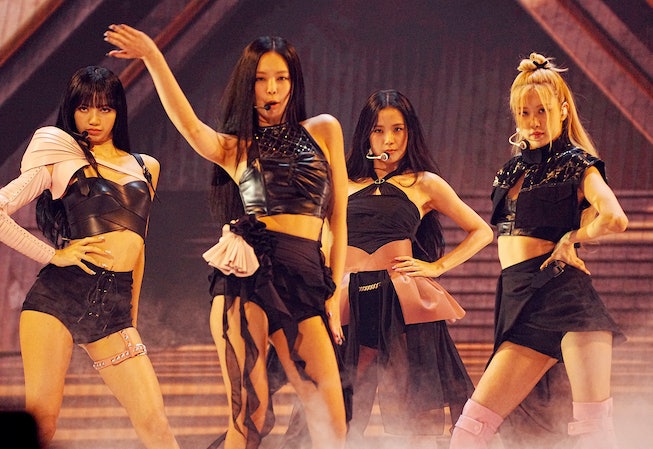 Blackpink knows how to make an entrance. The world’s biggest girl group made its U.S. award show debut on Sunday night with a triumphant performance of their latest single, “Pink Venom,” at the 2022 VMAs. Embodying their group name, the foursome appeared on stage in all black with magenta stage lights casting a glow as they delivered an error-free rendition of their latest track, running through its complex choreography alongside a squad of background dancers.

Earlier in the evening, Jennie, Jisoo, Lisa, and Rosé arrived at the 2022 VMAs red carpet in a much subtler manner by matching in all black. All four members opted for more casual and laid-back looks, opting for coordinated black summer dresses that were still effortlessly chic and showcased their personal styles: Lisa in a black Celine sundress; Jisoo in a black Dior lace appliqué dress; Jennie in a black Chanel halter-neck crop top and skirt; and Rosé in a black Saint Laurent long-sleeved mini dress. They paired their looks with minimal makeup and jewelry, bringing a fresh-faced aura to the red carpet.

Blackpink had a history-making night at the 2022 VMAs, becoming the first-ever female K-pop group to take home the Group of the Year award. The foursome also nabbed the moon man for Best Metaverse Performance for their July 2022 virtual concert, Blackpink The Virtual, held within the mobile game PUBG Mobile — while group member Lisa is additionally nominated under Best K-pop for her 2021 solo single and music video, “Lalisa.” Whether Lisa wins, the dancer and rapper will still be breaking barriers on her own as the first Korean female soloist to be nominated in the history of the VMAs.

Blackpink previously made history as the first Korean group to take home a VMA. In 2020, the girl group won their first-ever moon man in the Song of the Summer category for their hit song, “How You Like That.” In 2021, they were nominated under Best K-pop (“Ice Cream” with Selena Gomez) and Best Group, though they didn’t win either.

Blackpink is in the midst of promoting their long-awaited sophomore album, Born Pink, out September 16. “Pink Venom” is the first single from the highly-anticipated project, which will also involve a concept pop-up event in Seoul, South Korea, and a global tour.

Watch clips from Blackpink’s “Pink Venom” VMAs performance, below. See all the winners of the 2022 VMAs, here.