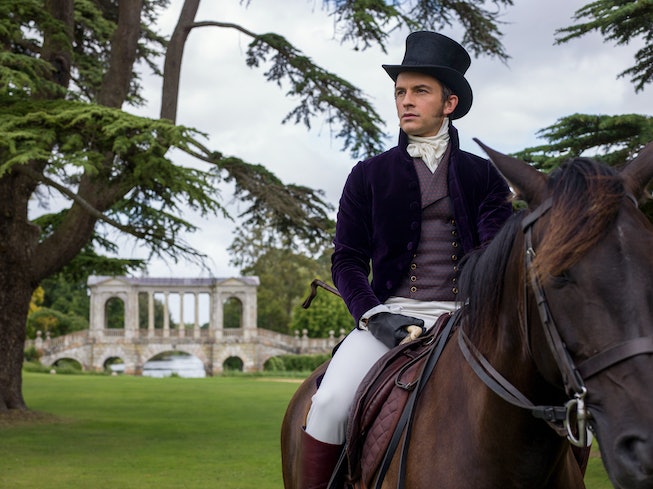 Grab your lace opera gloves and wrap yourself in the finest silk the modiste has to offer because Brigderton is officially back for a second season. No one is surprised that the Shondaland Regency era series is getting a new order — the Jane Austen meets Gossip Girl period piece filled with fêtes, beautiful gowns, and lots of horniness dazzled audiences since its Christmas Day debut and has become one of Netflix's most popular exports.

Keeping in line with Bridgerton's backbone of hot gossip, the announcement came in the form of a proclamation of Lady Whistledown herself. The anonymous writer kept her discerning eye on the comings and goings of the London Ton, and her latest paper confirmed that the cast would reassemble to film the upcoming season this spring.

Lady Whistledown also confirmed swirling rumors that the season two would focus on the eldest and most rakish of the Bridgerton clan, Anthony. "This author has been reliably informed that Lord Anthony Bridgerton intends to dominate the social season," she wrote. "I will have my pen ready to report on any and all of his romantic activities."

Back in reality, Bridgerton creator Chris Van Dusen spoke of the renewal and what to expect from London's mercurial high society. “We have a bunch of new characters we are going to be introducing,” he explained on Today with Hoda & Jenna. “Anthony is going to have a love interest next season, and I think it’s going to be as sweeping and moving and as beautiful as viewers of the first season have come to expect from the show.”