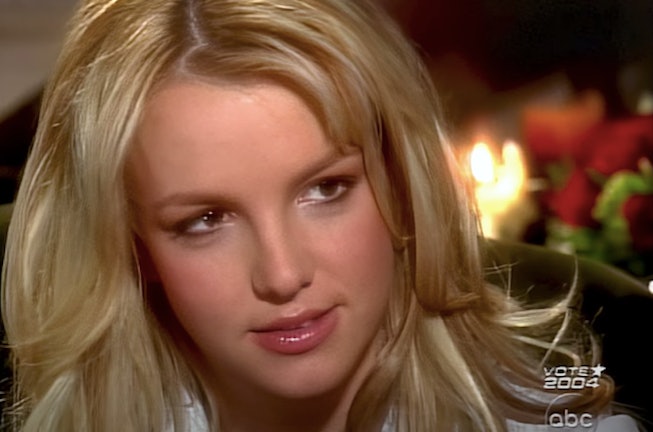 Since being officially released by a court from the constraints of a 13-year conservatorship ruled by her father, Britney Spears has been basking in her freedom, sharing her excitement on Instagram about enjoying the perks of adulthood and the normalcy of life. She’s also continued to reflect on her past as America’s pop sweetheart, most recently taking to task an interview she did with Diane Sawyer 18 years ago.

"Do we dare forget the Diane Sawyer interview in my apartment almost 20 years ago?" Spears wrote in a now-deleted Instagram post, addressing an infamous 2003 interview she did with Sawyer for ABC. "What was with the 'You're in the wrong' approach?? Geeze... and making me cry???"

She continued, addressing Sawyer’s line of questioning that painted Spears as a shopping addict. "Seriously though... I lived in my apartment for a year and never spoke to anyone... my manager put that woman in my home and made me talk to her on national television and she asked if I had a shopping problem!!! when did I have a shopping problem?"

At the time, Spears was recovering from the aftermath of her highly public split from her first major relationship with Justin Timberlake. In the interview, a 22-year-old Spears looks visibly nervous, admitting to biting her nails to deal with her anxiety. Sawyer grilled Spears about the breakup, asking “what she did” to Timberlake and bringing up Spears’ past sexual history. At one point, Sawyer says that Timberlake has “made a sport of public retaliation,” before ABC plays a clip of Timberlake admitting during a radio show to sleeping with Spears, who until then had publicly proclaimed herself a virgin. Talking to Sawyer, Spears says that she felt “exploited” and “very uncomfortable” by Timberlake’s public discussion of their relationship.

"Something I never shared when I had that break up years ago was that I couldn't talk afterward," Spears wrote of the interview on Instagram, "I was in shock... pretty lame of my dad and three men to show up at my door when I could hardly speak... two days later they put Diane Sawyer in my living room... they forced me to talk!"

Spears wrote that though she can now stand up for herself, at the time of the interview, she was a “baby.”