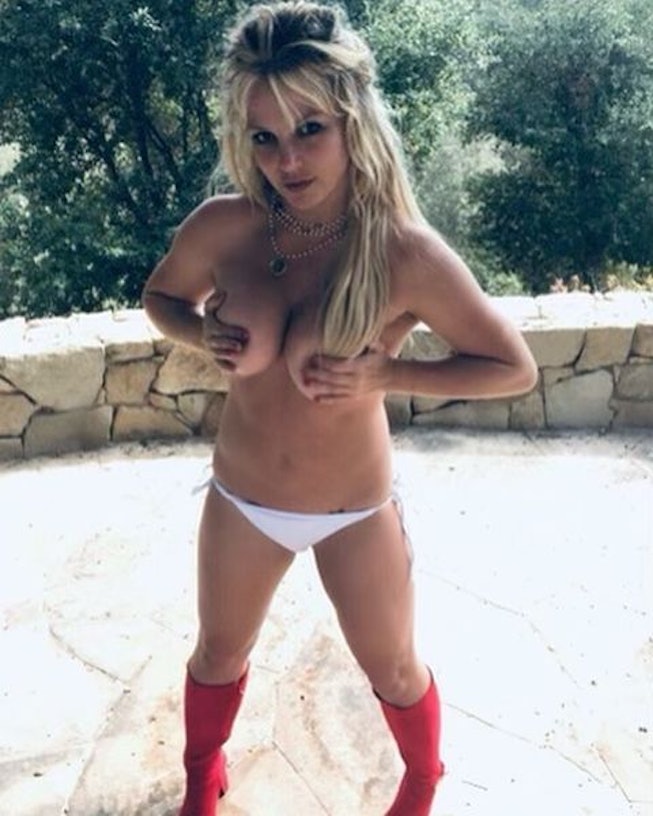 Britney Spears explained why she’s been posing topless photos on Instagram lately, saying she wants to see herself in her “purest form.” Denying that she had either surgery or is pregnant, the singer wrote in an Instagram caption, “Before I show you more pics of my body...I want you to understand my thoughts on exposing my skin!!!”

She went on to explain that, in the past, performing has made her feel self-conscious in her own skin, writing that seeing photos of herself after shedding a layer of clothing on stage has had a negative effect on her. Now, though, she wants to enjoy the body she has — without shame.

Spears continued: “I bet you’re wondering why I’d expose my body NOW … well it’s because I was born into this world naked and I honestly feel like the weight of the would has been on my shoulders and it’s made me view myself that way !!!! I wanted to see myself in a lighter way … naked … like the way I was born and to me looking back at my pictures when I shoot it’s insane the psychology in seeing myself in my purest form gives evidence that pain … hurt … tears … and heavy burdens aren’t who I am.”

Since sharing her heartfelt testimony back in June on the negative impact her 13 year conservatorship has had on her, Spears’ case has been further thrust into the spotlight, with countless celebrities, fans, and even those outside of the entertainment industry speaking out to support her. Most recently, Spears’ father, Jamie, agreed to step aside as the head of her conservatorship and be there to transition someone else into the role. While it’s not exactly the freedom Spears and her supporters have been demanding, it seems to be a step in the right direction.