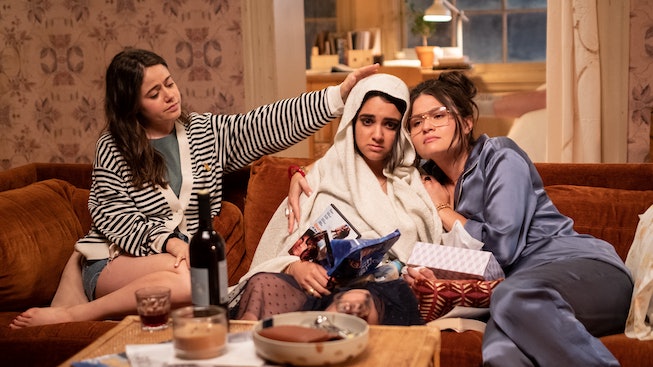 For eons, the “rom-com” has been defined by its ascription to its two titular characteristics: “romance” and “comedy.” The Broken Hearts Gallery, Natalie Krinsky’s debut feature about Lucy, an aspiring art curator reeling from a devastating breakup and recent job loss, is no different. The film checks all the requisite boxes: In its earliest minutes, Lucy accidentally meets aspiring hotelier Nick, who is also struggling to let go of a past relationship, and the two spend the rest of the film falling in love with each other. Respective leads Geraldine Viswanathan (Blockers, Hala, and Bad Education) and Dacre Montgomery (Stranger Things) have palpable chemistry, checking the romance box. And the film is laugh-out-loud funny, covering comedy.

But unlike other rom-coms, The Broken Hearts Gallery is almost as much about overcoming one heartbreak as it is about finding new love. As its name would suggest, the film also follows Lucy’s pursuit to open her own art gallery. Inspired by her hoarder-adjacent collection of mementos from past relationships, Lucy launches The Broken Hearts Gallery, where she plans to exhibit these trinkets alongside similar “ex memorabilia” from other people. And while Lucy’s budding relationship with Nick foregrounds the plot, Natalie Krinsky sets up her film so that Lucy would never even find new romance if not for the support she gets from her two best friends and roommates, Amanda (Molly Gordon) and Nadine (Phillipa Soo), who help lift her back up after the breakup and are always there to offer their constant support and unconditional love.

The film’s opening scene, a flashback to “8-ish years ago,” sets up this dynamic perfectly. Starting in a closeup, the camera zeroes in on Lucy’s face as she tearfully recounts the emotional story behind a seemingly random rubber ducky that she currently keeps in a box. Her then-boyfriend won it for her at a fair (a second-place prize), it turns out, and as she explains why she refuses to get rid of it, the camera slowly pans out to reveal Amanda and Nadine sitting on either side of her — the perfect Angel and Devil on her shoulders. Amanda ruffles through the box, which Lucy has been using to save such mementos. “Is this his retainer? He needs this! He has a shark-mouth,” she playfully mocks. “Don’t listen to Amanda. Your collecting is quirky and adorable. You’re basically an anthropologist! Nothing wrong with being sentimental,” Nadine responds in turn. Even with their different approaches to comforting their mutual friend, it’s clear how seamlessly this trio works together. The scene concludes with them deciding to do their usual “breakup routine” of standing outside the gas station until someone agrees to buy them wine that they can then take home and drink out of straws made from licorice.

It should come as no surprise that Viswanathan, Gordon, and Soo all gravitated towards this aspect of the script. “The great loves of my life are my female friends. There's just a deep soul connection and it's seen me through good times and bad times,” Gordon tells me over the phone earlier this week. “I love that this movie holds that relationship so high.” Soo echoes this, telling me, “I feel like in so many of the moments in my life — especially as a young person, in the in-between and unknown moments where you're moving on from one chapter of your life to another, whether that's a job or a relationship — I really turned to my friends.”

“I think it really reminded me of my trio of best friends in my hometown,” Viswanathan says. “I'm fortunate that I haven't had too many horrible breakups, but we definitely need our friends to be there for us in those moments when we do. We need those people that know you inside-out and automatically know what you need, like how Amanda immediately gets the Eternal Sunshine of the Spotless Mind DVD.” Close friendships are special, and more often than not, they outlast the majority of romantic relationships we find ourselves in.

Of course, films about the bonds between women certainly aren’t new. In fact, in the past two years alone, Gordon and Viswanathan have both starred in films that centered this very dynamic — Gordon in last year’s Booksmart, Viswanathan in 2018’s Blockers. But there’s something special about the focus paid to it in the context of a rom-com, a genre that isn’t necessarily known for its depiction of love in any platonic sense. Yet, in so many ways, it’s necessary. In times both good and bad, it is our friends we turn to first for solace, comfort, and understanding. As Gordon illuminates, “People always think when you're in a relationship with a lover, that's when you truly see yourself, which I think is so true. But I also think there's an intimacy and a closeness that comes with friendship that can sometimes be even more profound.”

You’ll be hard-pressed not to pick up on this in The Broken Hearts Gallery. Lucy’s willingness to take Nick seriously as a romantic prospect comes only after she’s undergone her own personal growth, which is undoubtedly fostered by her friends. Even in the film’s big finish, when Nick makes the grand public proclamation of love you’d expect from any good rom-com, Krinsky insures that Amanda and Nadine are part of Lucy’s ultimate decision to requite his gesture. When she initially tries to resist, stubbornly acting like she doesn’t feel the same, it’s Nadine and Amanda who step in and make her confront the feelings she so clearly has for him.

Moments like these are sprinkled throughout. About fifteen minutes in, when Lucy first comes home to tell Amanda and Nadine that she’s been dumped (and fired), her friends immediately sit her down on the couch and start attending to her — dressing her in a robe, putting a mask on her face, and grabbing comfort snack food. (In a hilarious nod to one of the film’s funniest recurring jokes, Amanda’s boyfriend, who notoriously never speaks, simply walks into a different room and pulls the curtain closed behind him. He clearly knows when it’s time to make himself invisible so the girls can have their time together.) These are ride-or-die friends in the truest sense, celebrating the highs and mourning the lows. When Lucy is too depressed to get out of bed, Amanda and Nadine don’t hesitate to force themselves into her room to drag her out, and when Nick hurts Lucy, they're right there again, ready to menacingly chop up a cucumber while spewing out thinly-veiled threats about what they’ll do to him if he doesn’t properly apologize. But when it comes time to celebrate Amanda’s birthday at her “murder mystery karaoke” party, they’ll just as quickly stand side-by-side to perform a tercet of Ava Max’s “Sweet But Psycho.”

It’s only natural that this general sense of camaraderie would extend to their off-camera relationships as well. During individual conversations, all three actresses emphasized that the friendships they made with each other during filming would last a lifetime. Each one regaled me with stories of things they did together, places they went, and inside jokes they made. My favorite came from Viswanathan, who pointed out that the “Sweet But Psycho” karaoke scene wasn’t originally in the script. “I mean, so many jokes that we would just make to each other ended up in the movie. We became obsessed with the song ‘Sweet But Psycho’ during filming — mostly in an ironic way, but then, eventually, in a very serious way,” she recalls. “It was on the radio constantly, and in the van on the way to set, it would be playing. It would just be stuck in our heads all day. We would sing it to each other constantly and Natalie was like, ‘I guess we have to put this song in the movie.’ So then she let us do it in the karaoke scene and just absolutely thrash around. So yeah, there's a personal homage in that.”

Soo and Gordon, who coincidentally lived together as roommates years ago when they were both workshopping a musical, expressed similar feelings. “I feel like I spent so much time just laughing on set, which was the best part,” Soo informs me. “You form these really strong relationships that you'll keep with you your entire life. The film is done and we finished shooting it last year, but I know that we'll continue to laugh and grow together.” Gordon, speaking collectively about her experience filming The Broken Hearts Gallery and Booksmart, says, “I’ve formed a beautiful community of people through both of these movies. I feel like I have this new, beautiful group of friends, so that's been really lovely.”

At its core, The Broken Hearts Gallery is an uplifting film about turning past pain into art. On the surface, this is most obviously seen through Lucy’s gallery itself, which posits the idea that keepsakes from relationships that have ended can actually be beautiful, even as they serve as constant reminders of what couldn’t ultimately be. But on a deeper level, this can also be seen through the shared friendship between Lucy, Amanda, and Nadine, who continuously help each other contextualize their pain, no matter what it is — a necessary process for moving beyond the experience so you can gain the clarity you need to even find the beauty in it. There are many elements to love about The Broken Hearts Gallery, but that is what resonates the most.

In an uncharacteristically sincere moment from Eva Woolf, the no-bullshit art world impresario that fires Lucy in the film’s first minutes (played brilliantly by Bernadette Peters), she extends a few words of advice to Lucy right before offering her the opportunity of a lifetime. “Pain, my dear is inevitable,” she says matter-of-factly. “It’s what you do with it that matters.” Luckily, whenever Lucy finds herself in pain, all she has to do is take it straight to Nadine and Amanda. Somehow, this pair always knows exactly what to do with it — and it always matters.

The Broken Hearts Gallery is playing in select theaters now.