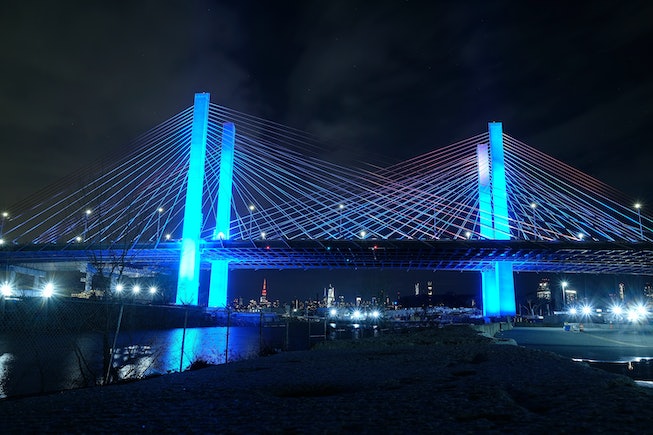 Whether you're on board or not, big parties are firmly an activity non grata for the foreseeable future. Since the COVID-19 pandemic shows no signs of quitting, social distancing and wearing masks remain vital actions to stop the spread of the virus. It's a certifiable bummer, and people are understandably getting antsy with the new, quarantined version of life. Some New Yorkers took out their frustrations with a secret rave underneath the Brooklyn side of the Kosciuszko Bridge in New York City. The rave featured sets from Pictureplane and DJ Mazurbate, and billed itself as a socially-distanced event with plenty of space, masks, and hand sanitizer for attendees. Unfortunately, the rave didn't go according to plan, with videos showing packed, maskless crowds.

Pictureplane was hit hard with criticism at his decision to DJ the event. The DJ released a statement noting how he initially thought the massive space seemed safe for a rave, along with how DJing for the first time after quarantining for approximately six months felt incredible. "I'm sure a lot of people there felt the same," he wrote. "But I don't think it was worth the risk looking back on it now. I definitely won't be going to any events like that again while COVID is still happening. And I really hope that no one gets sick after this event."

The criticism kept piling up, however, and Pictureplane released a second, more somber statement regarding the secret rave. "I made a mistake by agreeing to DJ that party. People are right to be angry and concerned about the wellbeing of their community in these traumatic times," he explained. "Before the event, I spoke with the promoter about my concerns, I was assured that everything would be safe and organized, with masks being enforced and sanitation provided to everyone. I imagined the event totally differently in my head before playing."

The event was organized by a group called Renegade, which previously threw another rave billed as a Black Lives Matter party at the same location in early July. While organizers agreed that the party didn't go as intended, they doubled down on its right to exist. "If you think people aren't going to gather, you're a fool—there's no stopping that," said an anonymous organizer to Gothamist. "The event got out of control because people wanted to come, people wanted to be out. People have been cooped up for so long. The pressure is building, and people need a release. It's already happening. We can do it more safely, or we can pretend it isn't happening."

Governor Andrew Cuomo is naturally not buying it. "It’s disrespectful. It’s illegal,” he said during an August 3 press conference, “It violates common decency. Look at all the people you endangered. What if one of the people gets sick and dies?...We need better enforcement all across the state.”