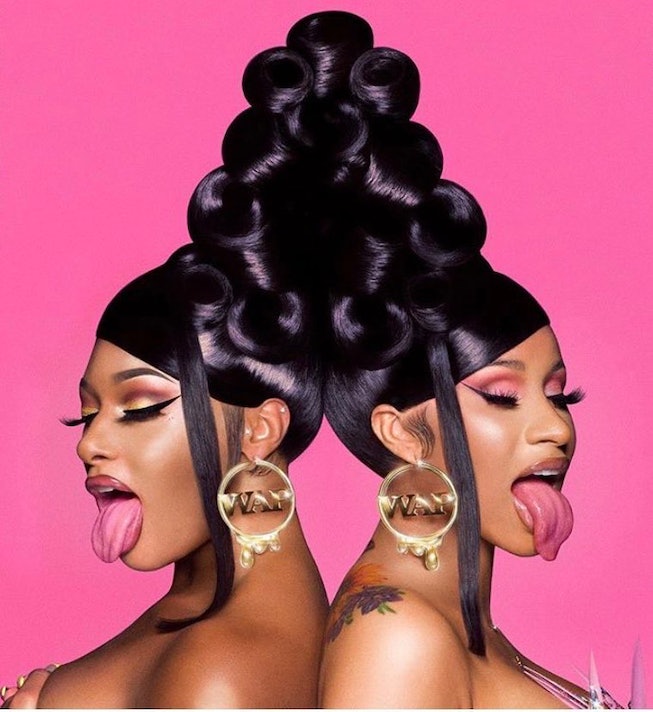 On Sunday night, just before 10:30pm, Cardi B took to Twitter to post a video of herself mounting a couch. “I got an announcement to make tomorrow,” she said, ending the short clip with one of her signature tongue-pops. The video naturally elicited a lot of excitement amongst her fanbase, especially since the Bronx-born rapper has been teasing new music for a few months now. So when she returned to Twitter yesterday afternoon to tweet, “Ya better start going to my website now,” it was no surprise that the site promptly crashed. But not before people found out what the Billboard chart-topper had cooking up: a new single with fellow rapper Megan Thee Stallion, which is dropping extremely soon.

Surprise! “WAP,” the new collaboration between two of the leading voices in hip-hip, is out this Friday. And if you want to listen to Cardi B's advice and visit her website (while it's not crashing, of course), you can preorder limited edition vinyls, picture discs, and more up until Thursday. (As of writing, there is a half-hour wait time to be let into the online store, with almost 10,000 people waiting in the virtual line.)

The stunning single cover places the two rap queens against a striking hot pink background, where they stand side-by-side, looking out in opposite directions, their respective wigs coiling together to form one giant, radiant beehive of ultra-sheened hair. They wear matching WAP earrings and, as is their wont, both women have their tongues playfully stuck out. It’s an incredible and cheeky depiction of two Black women at the height of their game that also references one of the best magazine covers of the year. Of course Twitter users are already wondering, "Can album art win a Grammy cause damn."

This will be Megan Thee Stallion’s second high-profile collab of the year after fully breaking the internet with her world-stopping Beyoncé-fronted reimagining of “Savage” in April — which also became the Houston native’s first Billboard Hot 100 chart-topper. Last year, Megan dropped “Hot Girl Summer” with Nicki Minaj, so it’s clear that she is the rapper on the most good terms with her peers. Cardi, on the other hand, most recently guested on a few tracks, including Fat Joe’s “YES” and the remix to Anuel AA’s “La Bebe.”