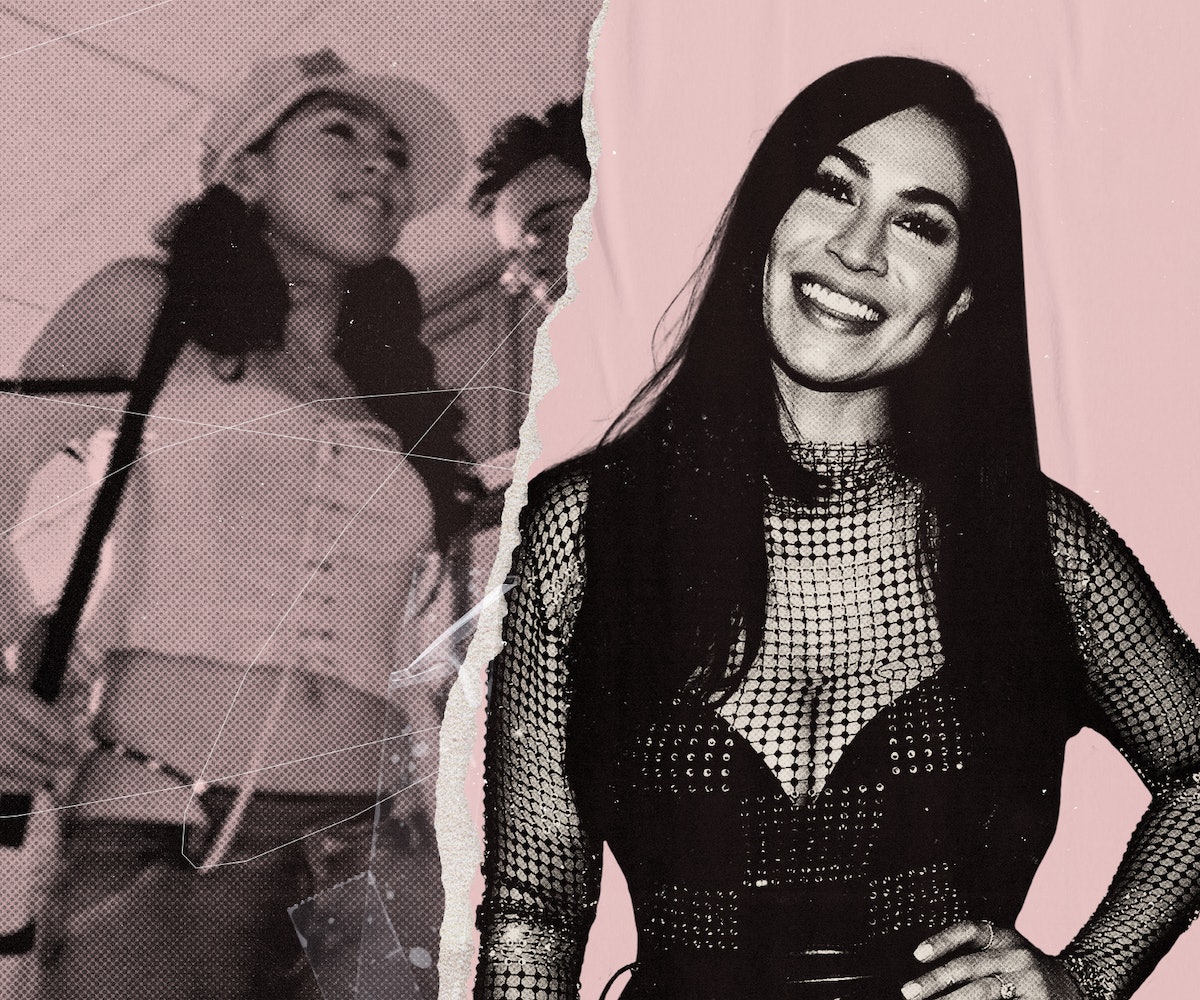 Euphoria is many things — the greatest show on Earth, a really long music video, it truly depends who you’re asking — but above all it is a gift to the internet. It’s spawned hundreds of YouTube makeup tutorials, TikToks of people reciting Cassie’s Season 2 freakout, and most importantly, it is the show that launched a thousand memes.

Earlier this year, NYLON posted one of these very memes on our Instagram page: a picture of Degrassi’s Manny Santos’s iconic thong walk, with the text “manny santos walked so the euphoria girlies could run.” And when Manny Santos herself, actress Cassie Steele, commented on it, we knew we had to get her on the phone.

A week later, Steele hops on Zoom from her office job in Colorado. She recently made the move after 15 years in Los Angeles. “I needed a change and I had some working opportunity here, so I made the move and I just really love it,” she says. “I just wanted a change of scenery and I was going through a divorce at the time, and I didn't plan to live of here full time, I just fell in love with it and just happened. I feel like I've done my time in L.A.”

While acting may not be her full time job at the moment, she is still fully tapped into the grip she and Manny have on pop culture. In February of last year, she posted a TikTok of herself doing the “Buss It” challenge that saw her recreating the thong outfit. This year, she’ll collaborate with designer Rachael Finley’s brand Hot Lava on a line of thongs, due out this spring. “I myself love a good thong,” Steele says. “Hate those pants lines. You know what I mean?” The collection, she says, will be a “an ode to the character and that time.”

Here, Steele reminisces on the first time low-rise jeans were in style, breaks down the Maddy vs. Manny comparisons, and shares what she knows about the upcoming Degrassi reboot.

It’s all over the internet, and you even commented on NYLON’s Instagram post of the meme, but when did you first start hearing the Maddy and Manny comparisons?

People kept telling me Euphoria was very much like Degrassi. They're like, "It's what Degrassi was supposed to be". I'm like, "Degrassi wasn't supposed to be like anything, first of all, but let me see this Euphoria". And I saw the character, Maddy. I think her name is Maddy? And she had these pants, and I was like, "Oh that's so that's so Manny-esque, that's so much fun". I feel like possibly that was... maybe that's why Manny's look is doing a comeback.

We need to talk about Manny’s thong moment, which has become one the things people remember most from Degrassi. You recently recreated the look on TikTok — where’d that idea come from and how was slipping back into the thong?

I feel every time I make a TikTok, I make it really complicated and then I go to do it and I'm like, "Oh man, we only have half this stuff. Okay, it's going to take three more weeks to put together this 10 seconds.” I've been trying to do this Megan Fox one for ages, and I just cannot seem to get it down with my bangs.

But this one was a really easy one. One of my girlfriends does social media stuff and she's like, "Cassie, you have to do this.” I got this blue thong and bejeweled it on my boyfriend. I think a lot of people were asking about that outfit. I always get a lot of tags during Halloween of people wearing it.I just thought it was a really nice opportunity to do something fun for these fans who still hit me up consistently and still think about it and still message me.

When did you realize it had gone viral?

Did it go viral? I knew it got a lot of views, but I didn't know it was a viral.

I think whenever Drake comments on something, it’s instantly viral.

I mean, I did not expect it to go viral because it's been so long now. I'm 32 now, so it was almost two decades ago.

What do you remember from filming that scene?

I remember thinking, "Oh, my butt looks terrible in these pants there's this camera on my butt". And I'm 14 at that time. It was exhilarating, but also very nerve-wracking. So I feel like it opened a lot of doors for me, but anything at that age is so heightened and kids are so judgmental because they're sensitive, so it was definitely a blazing path to go down. Imagine if there was social media at that time? I can just imagine all the ways that it could have gone wrong.

Have you stuck with watching Euphoria since you first checked it out?

I watched the first season. I really love it. I'll probably catch the second season at some point in time. Sometimes it just makes me feel a little sad. I can only take so much for my heart. If I feel like I need to crack a beer every time I flip open the TV, then...But I really loved it. The actors do such an amazing job.

Did you agree with the Maddy/Manny comparisons once you watched?

I mean, definitely the big difference are the D's instead of the N, right? Big difference. Way down the alphabet line. But yeah, I don't know. I feel like it was so similar, some of it, but I don't know...

Now Degrassi is getting rebooted again, and this time on HBO, just like Euphoria. Have you heard anything about it?

I haven't heard a ton about it. I saw it on Instagram. I mean, I'm always looking for Degrassi to be more risky, more like Euphoria, I guess. But Degrassi has its spot and it plays to that crowd. So I think Euphoria will be Euphoria, but in my mind I'm like, "I want the competition. Come on. Come on, Linda Schuyler, Degrassi, let's take them down. Let's show them some titties.

I’m personally very curious what a Degrassi on HBO Max in 2022 looks like.

For sure. I'm wondering the same as well. I mean, I feel that I'm so out of touch with the youth and I see all these TikTok and they have all this lingo. What's it called? Not the Millennials, the Gen Z?

The Gen Z. And I just don't get it, and I wonder how much it will play into the new series. These kids nowadays are just so much more advanced with just being connected and their phones. I remember constantly losing a flip phone. No one was ever like, "Grab your phone.” So it should be interesting.

If they approach you about coming back as Manny in her thirties, would you be interested in that, or is it put to bed for you?

I will always think about anything if there's a lot of money to be made, I can be bought. So there's a price, but I just don't know. I feel like, what... was she going to come back as a drama teacher?

Maybe! We know she didn’t make it in Hollywood...

Maybe. She had to come back, be a drunk drama teacher. I feel like it would be more fun to make a series about the actual lives of the real cast.

I just mean Aubrey [Drake] went on to do so many amazing things. Some people just had such amazing lives. Whether or not you still hear about them or not, I feel that just because they're not in the media doesn't mean they haven't accomplished so much.

You did have such a good cast and the show is still beloved by so many people. It was a real moment in culture.

Definitely. I mean, definitely, I'm agreeing with what you're saying. But I feel that being part of Degrassi, you don't really understand it when you're a part of it. I feel like it's very hard to gauge being on this side of the glass.

Can you see it now, two decades later?

I guess so. It's very hard to say because when you grow up with it for so long, it's hard to quantify what a cultural big deal is. It's hard to quantify what it is. So I feel I'm still a little removed from it, but it's always really fun to see people's reactions. When I was doing a lot more music in my life, I had a lot of people who were coming to my shows and on some of the tours with me that were big fans who had seen me through Degrassi. And I was always really thankful that they had taken such an interest in me that they wanted to follow me on a tour or go to my shows and buy my music.

Does it feel like another lifetime ago for you at this point?

It does feel like a different lifetime, but I feel like it's still such a huge part of my life. There's always a reboot. I know that there is this now, but not too long ago, there was another wave when it got debuted on Netflix. I'm excited to see what the new show's going to be like. I really, really want to challenge Euphoria.