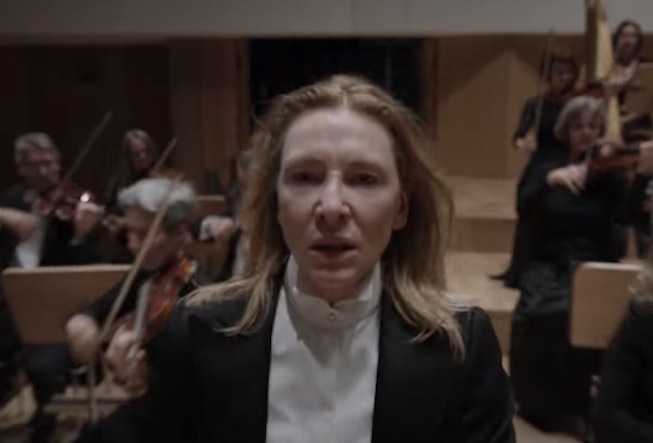 “Lydia Tár is many things,” says an interviewer as they introduce the title character from TÁR in a trailer for the new film. As he’ll go on to note, the famous composer is, amongst other things, a past conductor for symphony orchestras in Cleveland, Chicago, Boston, and New York, a principal conductor in Berlin, and one of only 15 people in the world to EGOT. So, yeah, Lydia Tár is kind of a big deal.

But as the trailer slowly begins to tease out, Lydia is also in some deep potential trouble. “I received another weird email,” her loyal assistant Francesca ominously tells her as the two sit side-by-side in the backseat of a car. “I’m worried. She’s starting to disappear into herself,” says another of her.

Directed by Todd Field, TÁR “examines the changing nature of power, its impact and durability in our modern world,” according to a plot synopsis. The upcoming film, which hits select theaters next Friday, October 7, is Field’s first in sixteen years. His last, 2006’s provocative Little Children, was nominated for three Academy Awards, including one for his adapted screenplay and another for Kate Winslet’s lead role. (Winslet would win just two years later for The Reader.)

And if early responses to the new Focus Features release (mine included) are anything to go by, Field could be gunning for similar accolades this cycle. Lydia Tár is played by Cate Blanchett in what many have described as the two-time Academy Award winner’s finest performance to date. The film earned the actress the Volpi Cup for Best Actress at the Venice International Film Festival, and since screening at Telluride, TÁR has been showered in critical acclaim. It currently sits at an impressive 97% on Rotten Tomatoes. Cate Blanchett is considered an early lock for the 2023 Oscars Best Actress race.

It’s not hard to understand why she’s such a threat, either. In the first trailer for the film, Blanchett’s intensity can be felt in just two-and-a-half minutes as she aggressively conducts her instrumentalists, steamily makes out with her partner, Sharon, and powerfully jogs around her neighborhood at night. Blanchett is fierce. It’s no surprise she responds, “Yes, yes it does” so plainly when presented with the question, “Do you ever find yourself overwhelmed by emotion?”

Watch the trailer for TÁR below. Check the film out in select theaters starting October 7.