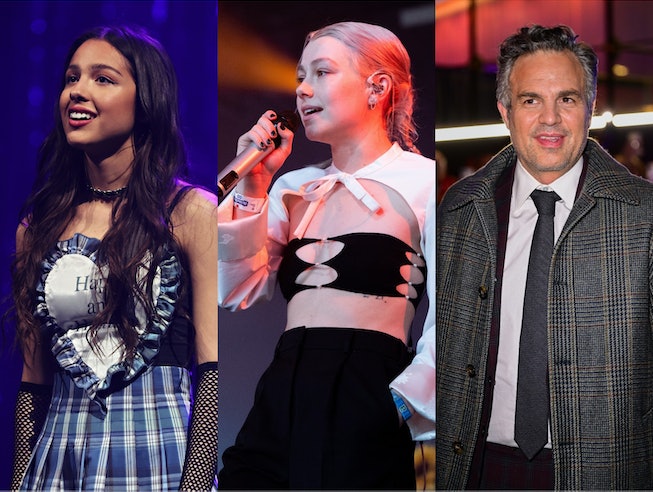 As celebrities walked the red carpet of the Met Gala on Monday night, donned in gilded-era gowns (or at least, bizarre interpretations of the vague theme), Politico published a leaked draft majority opinion from the desk of Supreme Court Justice Samuel Alito that would overturn the landmark decision Roe v. Wade, 49 years after it was decided.

It was a wild, dystopian juxtaposition of American culture to see opulence at such a massive scale while the rights of women to seek safe abortions was under threat — timing that only worked to further enrage the public. Over the last week, protests have erupted across the nation and celebrities, no longer donning gilded gowns, have been speaking out against the draft opinion.

Below are some of the celebrities who have spoken publicly on social media or in public about the issue, either sharing their own abortion stories, places to donate, or simply expressing their rage, which includes everyone from Olivia Rodrigo to Cher to Questlove.

Kicking off the U.S. leg of her Chromatica Ball tour in Washington D.C. on August 8, Lady Gaga took the opportunity to air her thoughts about the Supreme Court Dobbs decision and gay rights. Before launching into her performance of “Edge of Glory,” the singer paused to dedicate the song to “every woman in America.”

“I would like to dedicate this song to every woman in America,” she said to the crowd per audience-captured footage. “To every woman who now has to worry about her body if she gets pregnant. I pray that this country will speak up and we will not stop until it is right. I don’t mean to be a downer, but there’s some shit that’s more important than show business.”

Earlier in the show, Gaga also defended gay marriage, a topic Supreme Court Justice Clarence Thomas seemed to hint was next on the Supreme Court’s agenda in a concurrent opinion published at the same time as the Roe overturning. Getting ready to play “Born This Way,” Gaga said, “This might not be the national anthem, but it’s our national anthem! They better not try to mess with gay marriage in this country!”

Days before releasing his third studio album, Harry’s House, Harry Styles shared his opinions about the Roe v. Wade situation during an appearance on The Howard Stern Show. “I just don't think anyone should be able to make decisions about anyone else's body,” he said. “It doesn't really make any sense to me. What's happening here in the country at the moment, I don't really know where that ends. At that point is it: someone needs an operation and someone can decide that they can't have it?”

He added that the backlash and uproar seen across the country since the news broke is what should be happening, and encouraged people to continue taking a stand on issues they believe in. “Our bodies should never be in the hands of politicians. I hope we can raise our voices to protect our right to have a safe abortion, which is a right that so many people before us have worked so hard to get,” he said.

Lorde expressed her thoughts about the potential overturning of Roe v. Wade during her May 5 show in Los Angeles, telling the crowd she was “sickened” and “heartbroken” by the news. “Like so many of you, I’ve been sickened and heartbroken this week by the news that there are some people who think that our bodies are not our own,” she said. “And I still don’t have the words to talk about this with you. It’s so big and so heavy. I think it’s OK to freeze for a little bit, you know, and then you re-engage. But, what I’m trying to say is I have some big, heavy shit that I am working through that I am feeling.”

Rodrigo took the opportunity on her SOUR tour to speak out against the proposed ban. “Our bodies should never be in the hands of politicians,” she told fans in Washington D.C. “I hope we can raise our voices to protect our right, to have a safe abortion, which is a right that so many people before us have worked so hard to get.”

"I had an abortion in October of last year while I was on tour," the singer wrote on her Instagram stories and Twitter. "I went to planned parenthood where they gave me the abortion pill. It was easy. Everyone deserves that kind of access." She then added a link with places to donate to help other women have access.

Halsey posted a lengthy statement to Twitter speaking out against the proposed ban. “The overturning of Roe V Wade will mark a catastrophic shift in our fundamental rights to bodily autonomy and reproductive health care. We are constituents and we have the right and responsibility to fight this,” the singer wrote. “This is not a false alarm, again. This is not a hypothetical. And while for the time being you can still access abortion in all 50 states, that will not be the case in the summer when this decision is cemented. And many of those who seek abortion out of state will be at risk of persecution as well.”

Phillips, an active abortion rights advocate, took to Instagram on Tuesday, writing: “The person who risked everything to leak that document did so with the knowledge that IT IS NOT YET DONE.” The post continues: “Overturning Roe and Casey is against the WILL OF THE PEOPLE. It has NOTHING to do with BABIES and EVERYTHING to do with white supremacy and power hungry politicians attempting to keep systems of oppression in place.”

Ruffalo, a famously outspoken liberal, posted on Twitter, writing: “Forced birth & illegal abortions across state lines is backwards & cruel. The Supreme Court has BECOME the division. Thanks to Alito & his ilk of RW radicals, who are toxic to the Court’s impartiality. Based on his arguments, the Supreme Court is strictly political now.”

The TV writer best known for Black Lady Sketch Show and Ted Lasso, also took to Twitter, writing: “There's a particular slap to the face of being told we can vote for abortion rights, by the court that gutted voting rights.”

The actor has been posting and retweeting about abortion for days on Twitter, urging people to, “take action and make your voice heard!” She continues: “Contact your local, state, and national legislators and let them know that they need to take action to secure our rights and access to care.”

“REPUBLICANS MAY HAVE FINALLY GOTTEN THEIR WISH AFTER 49 YEARS,” Cher wrote in all caps on Twitter, as part of two long posts. “DEATH DUE 2 BACK ALLY ABORTION.”

“If they strike down this amendment, what is to stop them from striking down others that conservatives don’t agree with? ” Midler wrote in her tweets. “#SCOTUS has just revealed itself to be another political tool.”

Holding it down for the men, Questlove posted twice on Instagram, evoking Handmaid’s Tale fears, as well as asking other men to speak out. “Now we bout to visit the Handmaids Tale era,” he wrote in one post. “Men we of all people need to rally behind this,” he continued in his second. “This isn’t a aahh man that’s a woman’s thing.’ If this effects them? It effects us. We are in a state of emergency right now.”

NEXT UP
Entertainment
Olivia Rodrigo Hinted At New Music In 2023
Culture
A Britney Spears-Inspired Musical Is Coming To Broadway
Culture
Not One, But Two BTS Documentaries Are Coming
Culture
TikTok’s Top Artists & Songs Of 2022 Include Throwbacks & New Releases

This article was originally published on May 5, 2022