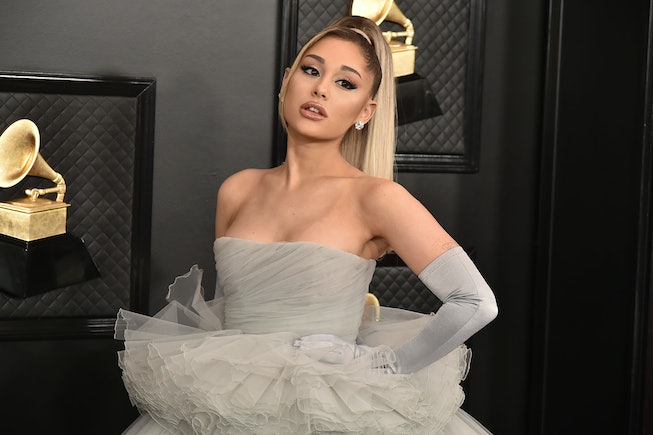 In the wake of the back-to-back murders of unarmed Black citizens like George Floyd, Tony McDade, and Breonna Taylor, who all died at the hands of police, hundreds of thousands of people around the world took to the streets over the weekend to protest police brutality. Holding up signs and joining in on group chants, protestors gathered and marched in solidarity with Black Lives Matter and similar movements. It was a necessary act of support for those whose lives have been unjustly taken from them, and it even sparked several celebrities to join in.

On Sunday, Ariana Grande took to Twitter to post several pictures from a Los Angeles protest she participated in on Saturday. Clearly frustrated with the news coverage of the so-called "riots," the singer sought to set the record straight, writing, "Hours and miles of peaceful protesting yesterday that got little to no coverage. All throughout Beverly Hills and West Hollywood we chanted, people beeped and cheered along. We were passionate, we were loud, we were loving. Cover this too please."

Grande's tweet was made in response to a similar one posted by Tinashe, who also spent the weekend protesting in L.A. Late Friday night, the singer posted a picture of herself walking down a highway, protective face mask in tact, holding up a sign that said, "BLACK LIVES MATTER." The following day, she took to the streets yet again, posting pictures of peaceful protestors gathered on Rodeo Drive in Beverly Hills. A followup tweet noted, "THE MEDIA DONT WANT YOU TO SEE THE PEACEFUL PROTESTS."

On Saturday, Tessa Thompson joined a protest in Los Angeles, posting a video of herself kneeling alongside fellow protestors while shouting, "This is our America" with fists raised high. The Westworld actress also posted about how "entirely peaceful" everything was before the Los Angeles Police Department "arrived and escalated it." Call Me By Your Name star Timothée Chalamet was also on the scene in Los Angeles, as was singer Miguel, who said, "It was good to be together in solidarity here in LA.They see and hear and feel us." Rapper Machine Gun Kelly gathered a sizable crew to march in Beverly Hills with a "SILENCE IS BETRAYAL" sign while singer Kehlani posted several black-and-white photos of the scene in the same area. "LIVE. NO JUSTICE, NO PEACE. LOS ANGELES MAY 30TH 2020. RESPECT EXISTENCE OR EXPECT RESISTANCE. #BLACKLIVESMATTER OUTSIDE INSIDE TODAY YESTERDAY TOMORROW AND FOREVER. POWER TO THE PEOPLE," her caption read.

These sentiments carried over into other cities as well. In New York, Ellen Page joined protestors at Brooklyn's Barclays Center, posting a video of peaceful people clapping, while Keanu Reeves protested in Baltimore from his car, riding down the street with his hood down as he held a sign out of it. Rapper J. Cole joined the protests in North Carolina while former Fifth Harmony member Lauren Jauregui joined her local protests in Miami, recalling the experience as "thousands strong and peaceful as fuck."

Unfortunately, things didn't stay peaceful and several celebrities found themselves facing violent retaliation from cops. While protesting on the frontlines in Los Angeles on Saturday, Insecure actor Kendrick Sampson was singled out by officers, who then pointed a gun directly at him before hitting him with rubber bullets (seven times) and with a baton "many" more times. His injuries landed him in the emergency room, where he was then asked by a nurse if he had "filed a report," an experience he recalls in a video. "Who the fuck am I going to file a report to?" he asks rhetorically. "Donald Trump? His administration? The FBI? Fuck the FBI. They have been surveilling our community and participating in killing our leaders forever."

The following day, Madison Beer shared that she was tear-gassed by police and witnessed others being arrested while protesting in Santa Monica. Streaming on her Instagram Live, the young singer urged others to go home before things took a turn for the worse. "If you're in Santa Monica, please leave now," she said, visible tears streaming down her face. "They're tear-gassing everything everywhere. I was just tear-gassed and I can't breathe." A similar situation befell singer Halsey, who posted pictures of armed cops threateningly pointing their weapons at protestors, including herself. "Fired rubber bullets at us," she reported in a tweet. "We did not breach the line. Hands were up. Unmoving. And they gassed and fired." Though she assured fans she was safe, she did admit to being "shot, gassed, and antagonized." Later, Halsey thanked her "11 Minutes" collaborator Yungblud, who she claimed "literally ran exposed in front of rounds being shot to drag wounded people to safety without even thinking twice."

Actor John Cusack, meanwhile, tried filming a burning car while protesting in Chicago, but was confronted by several unruly officers instead. Alongside a video of the incident, the original High Fidelity star tweeted, "Cops didn’t like me filming the burning car so they came at me with batons. Hitting my bike."

Of course, the protests are far from over, and as relations between cops and protestors undoubtedly get more contentious, hopefully many more celebrities will get involved. Though celebrities should take to the streets out of a sense of civic duty (as normal citizens like anyone else), it is important that people with larger platforms (particularly those whose wealth and fame can keep them insulated from the realities of our world) use them to show that Black Lives Matter — now and always.