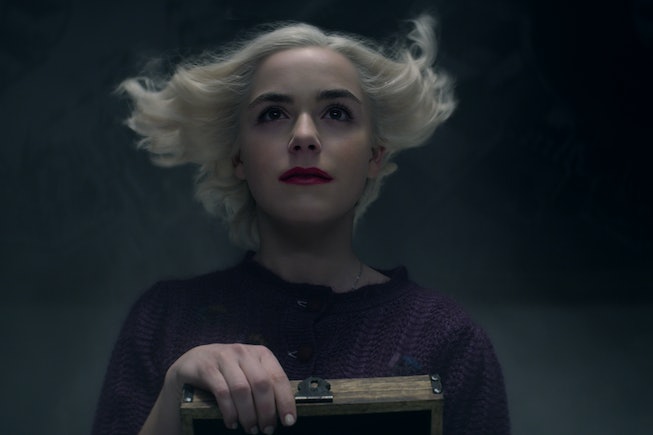 Exactly two years ago, Netflix inspired a whole new generation of occult-minded youth to tap into their inner witch when they released the first season (or "part," as they labeled it) of Chilling Adventures of Sabrina. Starring Mad Men's Kiernan Shipka as the well-known titular witch (who has been portrayed in different variations for close to six decades), the Roberto Aguirre-Sacasa-created fantasy series became an instant fan favorite thanks to its creepy foreboding atmosphere (naturally), stellar performances (Shipka is great, but so is literally everyone else in the cast), forward-thinking politics (you can't find pansexual witches and wizards just anywhere these days), and general sense of dangerous fun.

Unfortunately, Chilling Adventures of Sabrina is coming to a close with its upcoming fourth part. And while it's long been known that the second half of the second season was coming eventually — the last sixteen episodes were filmed together and then split in half for release — we didn't know exactly when that would be. Apparently, though, this final batch of installments is coming much sooner than we think. After premiering Part 3 earlier this year, back in January, before we were hit with a life-altering pandemic, Netflix and Aguirre-Sacasa will unleash the final eight episodes into the world on New Year's Eve, December 31st.

As is Netflix's wont these days, the official premiere announcement came in the form of a teaser trailer that placed new footage next to a few instantly recognizable clips from seasons past. "Get ready for The Final Chapter" it warned as images of seances, insect-ridden monsters, blood-soaked cheerleaders, and possessed high school students quickly flashed across the screen.

According to an accompanying press release, Part 4 will pick up right where viewers left off in Part 3. "Over the course of Part 4’s eight episodes, The Eldritch Terrors will descend upon Greendale," it reads. "The coven must fight each terrifying threat one-by-one (The Weird, The Returned, The Darkness to name a few), all leading up to...The Void, which is the End of All Things. As the witches wage war, with the help of The Fright Club, Nick begins to slowly earn his way back into Sabrina’s heart, but will it be too late?"

Check out the teaser below. Part 4 of Chilling Adventures of Sabrina hits Netflix on December 31st.