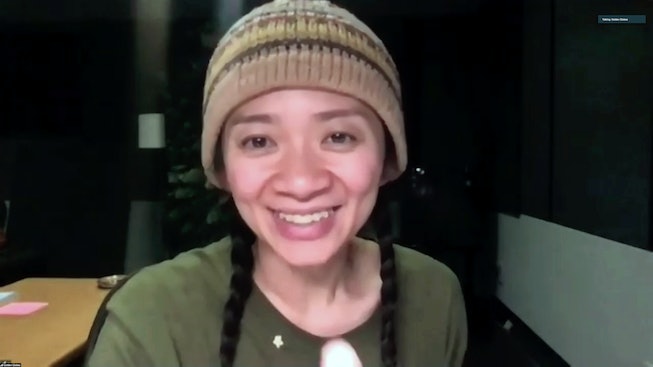 Photo by Handout/HFPA via Getty Images

The 78th Golden Globe Awards were, to put it nondescriptly, interesting. As usual, there were some truly shocking wins (like Andra Day besting Viola Davis, Frances McDormand, and Carey Mulligan for Best Actress or Jodie Foster taking out Oscar frontrunners like Olivia Colman, Amanda Seyfried, and Glenn Close), and some that were shocking but still felt well-earned (like the win for Judas and the Black Messiah's Daniel Kaluuya over likelier threat Sacha Baron Cohen). But there was one win that felt expected, though not guaranteed — and for that reason, still managed to delight: Chloé Zhao for Best Director.

Zhao took the award for her phenomenally intimate work on Nomadland, which follows Oscar winner Frances McDormand as a widow who gives up everything to spend the rest of her life on the road, making money through seasonal jobs at Amazon fulfillment centers. Zhao, who was born in China, became the first woman of color to ever win for Best Director at the Golden Globes and was only the second woman in the award show's history to win the Best Director trophy at all. (The first and only other winner was Barbra Streisand, who won in 1984 for directing Yentl.) That Zhao was already a part of history going into Globes night only makes the win more exciting. Nominated in the category alongside two other women (One Night In Miami's Regina King and Promising Young Woman's Emerald Fennell), Zhao was part of the first Best Director slate to feature a female majority.

Going into awards season, Nomadland was already a presumed favorite, coming in second only to Aaron Sorkin's The Trial of Chicago 7 as a likely Best Picture frontrunner at the Oscars. (And after beating Sorkin's courtroom drama for Best Motion Picture – Drama last night, it's not a stretch to say the edge has been given to Nomadland as we approach the season's home stretch.)

After premiering on the same day at both Venice Film Festival and the Toronto International Film Festival in September 2020, Nomadland went on to secure both festival's top honors, taking home the Golden Lion in Venice and the People's Choice Award in Toronto. The film has continued its winning streak in the months since, sweeping multiple awards amongst critics guilds, including the New York Film Critics Circle, the National Society of Film Critics, and the Los Angeles Film Critics Association. At the beginning of this year, it also won Best Feature at the Gotham Independent Film Awards.

Nomadland is Zhao's third feature, following her debut, 2015's Songs My Brothers Told Me, and her sophomore effort, The Rider, which was widely considered one of the best films of 2017. Like Nomadland, which focuses on an underrepresented population and uses a cast primarily filled out with nonprofessional actors (save for star Frances McDormand and Oscar nominee David Strathairn), both of Zhao's other films also focus on a similarly underrepresented population — South Dakota's Lakota Sioux Natives — and starred first-time "non-actors."

Her next feature, however, will mark a pivot for the director, as she commands a cast of A-List stars (Salma Hayek, Angelina Jolie, Richard Madden, Kumail Nanjiani, and Brian Tyree Henry, to name just a few) for one of the most highly anticipated films of 2021: Marvel's The Eternals.

And while I'll certainly be counting down the minutes until I get to see how Zhao injects her refreshing intimacy into the traditional Marvel formula — she was in the Disney editing room when she won last night — I'll rest easy knowing that I can always rewatch Nomadland on Hulu in the meantime.