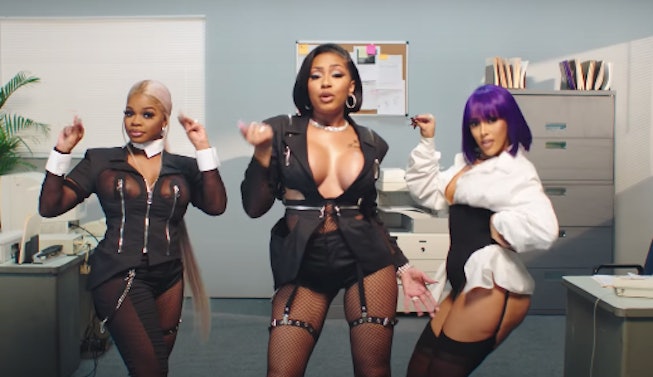 Ever since the arrival of their debut mixtape Period, Miami-based rap duo City Girls have rightfully been one of the buzziest groups on the scene. Known for their sexually-frank, proudly feminist raps, Yung Miami and JT were the Drake-approved name's on everyone's lips (even while JT was spending a year in jail for credit card fraud), and now, the pair has just dropped the video for their new Doja Cat-assisted single, "Pussy Talk."

One of the clear standout hits from City Girls' recently-released City On Lock album, "Pussy Talk" is exactly what you'd expect from its straightforward title — a playful song with a lot of talk about pussy. (Think of it as a modern-day response to Mickey Avalon's notorious phallus anthem "My Dick.") As is their M.O., City Girls' Yung Miami and JT take turns coming up with puns about how persuasive their vaginas can be, while recent Billboard chart-topper Doja Cat pops up for the single's second verse, where she does the same.

For the single's accompanying video, Yung Miami, JT, and Doja Cat all have fun in a corporate office, their sexy, revealing (and decidedly not-suitable-for-work) outfits popping out against the drab filing cabinets, super-sized printers, and outdated computer monitors. The rest of the video finds the trio dancing around a jungle, where they play with a variety of vagina-centric fruit (like grapefruit), while a few scenes find the City Girls by themselves sitting around a dining room table, piled high with gold and fine China.

Join the Pussy Discussion in the "Pussy Talk" video below.