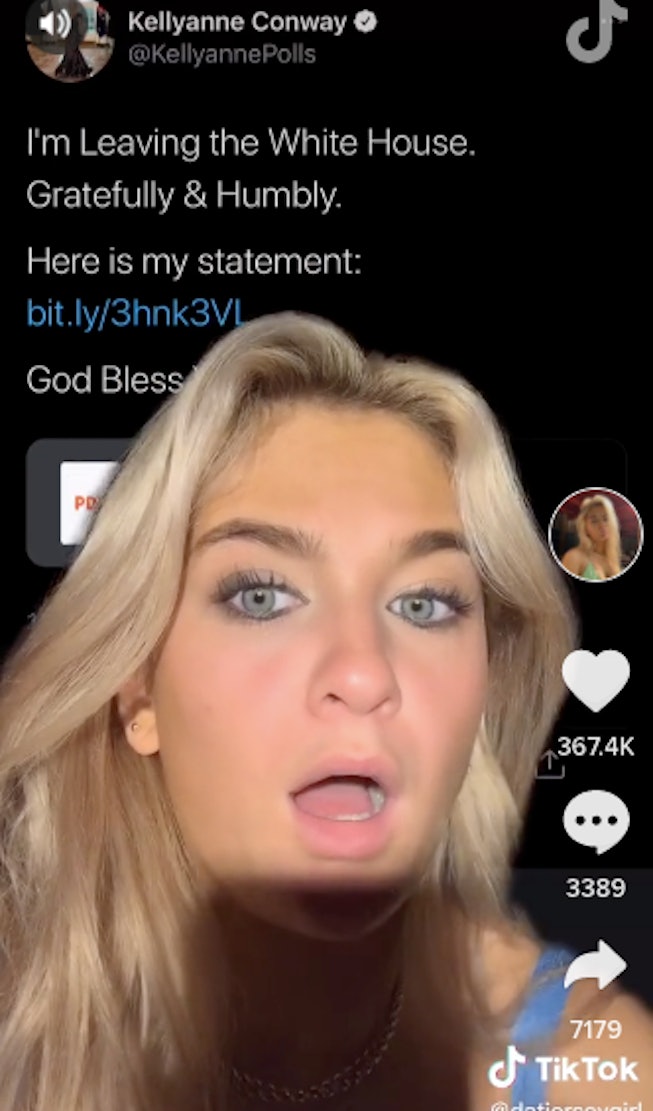 For the past few months, Claudia Conway, the daughter of President Trump's counselor Kellyanne Conway, has been using TikTok to boldly express her general disdain for the current administration, as well as her disapproval for her mother's involvement in it. A self-proclaimed "radical agnostic liberal/leftist," the 15-year-old has used the social media app to show support for the Black Lives Matter movement and stress the importance of getting rid of Trump in this 2020 election. So it should come as no surprise that, upon her mother's recent decision to step down from her post at the end of this month, citing a desire to focus on her four children as they prepare for a virtual school year, Claudia Conway took to her trademark social media app to celebrate the role she played in helping to disband Trump's current team.

Kellyanne's decision to resign came very quickly on the heels of Claudia's announcement about her intention to seek emancipation from her parents. "i’m officially pushing for emancipation. buckle up because this is probably going to be public one way or another, unfortunately. welcome to my life," she wrote in a tweet on Saturday night. Then, in a series of followup tweets, she talked about using social media as an outlet to express her passions, how her mother's job ruined her life, and even about the lack of agreement she shares with her father, despite their shared "common sense" on the necessity of getting rid of Trump. (Prior to this weekend, her father, George Conway, served as a founding member and adviser for The Lincoln Project, a notoriously conservative super PAC group dedicated to defeating Trump.)

On Sunday morning, she returned to Twitter to set the record straight, stating that she was not seeking emancipation from her parents because of her mom's job, but rather "because of years of childhood trauma and abuse." Hours later, she claimed that the response to her announcement was "becoming way too much" and said she would be "taking a mental health break from social media."

But apparently, that was enough to prompt Kellyanne to step down from her post. Less than seven hours after Claudia posted that tweet, the soon-to-be former counselor to the president took to Twitter with her own announcement. "I'm Leaving the White House. Gratefully & Humbly," she stated in a tweet alongside a Dropbox link to her official statement. That same night, Claudia's father took to Twitter to announce his own resignation from The Lincoln Project, stating, "So I’m withdrawing from @ProjectLincoln to devote more time to family matters. And I’ll be taking a Twitter hiatus."

It was then that Claudia miraculously returned to social media, hours after saying she was leaving. "Y'all, I know I said I was taking a break but ummm..." she said in one TikTok, which included her mother's announcement tweet casually peaking out from the background. In a different TikTok, she did the same with her father's tweet while repeating, "Look what I did. Look at what I did, ladies and gentlemen!"

Yes, Claudia! Look at what you did indeed. Check out Claudia's TikTok posts below.

NEXT UP
Culture
TikTok Dating Advice Is Hell On Earth
Entertainment
Ebony Riley's "Deuce Deuce" & 9 Other New Songs Out This Week
Entertainment
Beyoncé Is Now The Most Awarded Artist In Grammy History
Entertainment
Harry Styles' "As It Was" Grammy Performance Featured A Silver Tinsel Onesie
Style + Culture, delivered straight to your inbox.