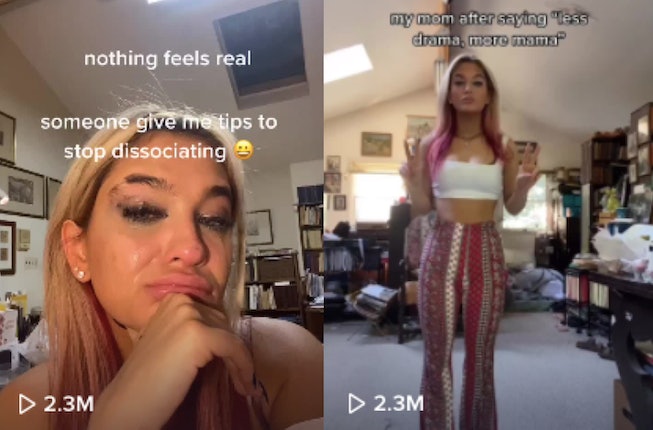 Claudia Conway is that one young-adult novel trope of "sleuthing teen outwitting the adults around her" come to life, if you swapped average parents with some of the highest-ranking civil servants in the United States. Claudia's TikTok quickly morphed away from its chaotic Gen Z origins of denouncing mom Kellyanne Conway's boss President Trump to a bizarro form of breaking news sans any slimy political pundits. The internet is, of course, eating it up.

Claudia is major a problem for the White House's business-as-usual, united front of virus downplay. She was first to announce that her mother had contracted COVID-19, one of the many positive test results to come from the president's inner circle of staunch supporters, as well as 123 frontline workers in the Captiol complex at the time of writing. Claudia then alleged that the rosy health updates coming from the White House are smoke and mirrors, and that President Trump's health is steadily worsening. "He is so ridiculous," she wrote in TikTok comments. "Apparently he is doing badly and they are doing what they can to stabilize him."

American society loves nothing more than the hero-ification of an individual. (In some circles, you might say that President Trump's alleged defeat of the virus is already being glorified into its own hero arc.) Sure, it's harmless to compare Claudia to Deep Throat, the informant who uncovered the Watergate Scandal and led to the first and only resignation of an American president in 1974, if it's in the name of good fun. We're watching a meme claw its way out of the internet and into real-life politics in a way that's too bizarre to not inspire humor.

Claudia's impact outside the splash zone of her online life has already been seismic — both Kellyanne and her politically estranged husband, George Conway, have resigned from their respective positions to focus on family. While the Resistance Democrats are gleefully adding these developments to their "Gen Z will save the world!" dossier, they're forgetting what's truly at stake: the mental health of a 15-year-old girl. Her mother's guiding hand in President Trump's policies have been emotionally taxing. Claudia is not interested in being the topic of discussion on Fox News again. Watching her fight with her family isn't a feel-good viewing experience. Yes, Claudia should be allowed to post to her heart's content, but her trauma isn't going to save democracy — whatever that means anymore — no matter how much people want it to.

Claudia released a statement to the mainstream media regarding her TikToks, COVID-19, and more.