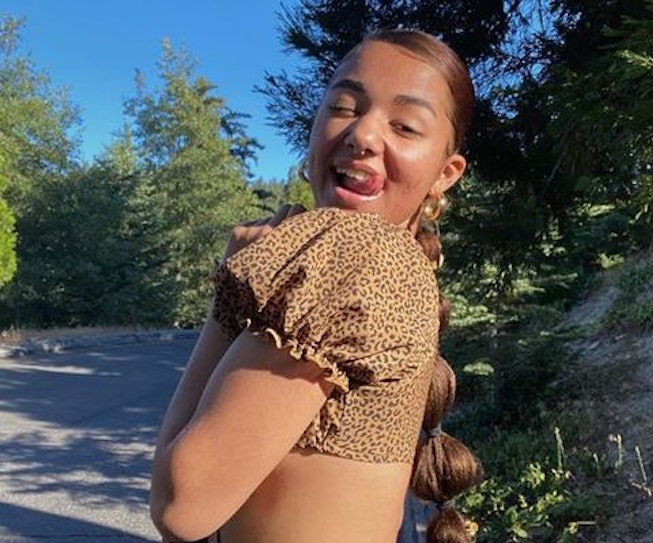 If you think TikTok is only disjointed dances practiced ad nauseam in front of bathroom mirrors, you've barely scratched the surface of the massively popular video sharing app. It's in its most niche content where TikTok shines its brightest. Case in point: 19-year-old Scarlet May and her viral TikTok series, "Deaf Kardashians."

As a deaf creator, May's series finds her cleverly signing her way through some of the most iconic scenes from the Keeping Up With The Kardashians canon, with perfect comedic timing and enough wardrobe changes that do justice to the matriarchal power family. If May signs as Kris Jenner, expect her to rock the tried and true momager uniform of a tailored blazer or a prim cardigan with a pair of giant sunglasses; when she signs as Kim Kardashian, prepare for a tight, glamorous outfit and the ultimate Kim accessory — her signature crying face.

While May, who is set to start her sophomore year of college this fall, certainly relishes the success of her "Deaf Kardashians" series (she's since expanded into The Real Housewives franchise and Barb territory), she's interested in more than just viral fame. She has a rapidly growing platform now, and she wants to use it for advocate for a cause that's near and dear to her heart: deaf accessibility. Sandwiched in between these reenactment videos are clips in which May champions for the importance of closed captioning on social media videos, a crucial element for the inclusion of the deaf and hard of hearing community that more often than not falls to the wayside for most TikTok creators.

"I think the most important message that I want to share is adding closed captions to social media," she says to NYLON over a Zoom chat from her southern California home. "The deaf community wants to be involved, and we don’t see many deaf people on TikTok because they don’t have the access, or they don’t feel comfortable on the app at all. It’s definitely my main focus."

How did you come up with the Deaf Kardashians concept?

When I first started TikTok, I was in college in D.C. My friends were telling me about a girl named Charli [D'Amelio]. At that point at I had never heard of TikTok or anything like that, so I decided to download the app. I was looking over it and thought it was really cool. I first started with dancing, I figured it would be enjoyable, like why not? I made one of the "Deaf Kardashians" series and that went viral. It was my first video to go viral, and then from there on I’ve been doing that ever since.

How did it feel seeing the reaction to your videos?

It’s weird! It’s very exciting, so it’s a good weird. I’m not used to having that many people upload or follow, and have so many fans. But it’s really a cool experience.

What do you think is the breakdown of your fanbase? Do you have a lot of TikTok followers that are also deaf or hard of hearing?

All of my fans are different. I have some people who messaged me and said they were really excited to see a deaf person represented, I have hearing fans. It really varies. I’m getting comments from all over.

You really get into costume changes for Deaf Kardashians. How do you decide on the wardrobe?

For the outfits I try to accommodate the person I’m imitating. For example, the Kardashians I go more girly to fit their style, personality, and expressionism. It’s really based on their own real life personas.

Who’s your favorite from the Kardashian-Jenner family?

I love all of them, but if I had to choose one I would definitely pick Kylie. I feel like we have more in common and I look up to her as far as the development of her makeup business and all she's done with that.

I love how well you imitate Kim’s crying face. It’s so accurate.

Oh, that! That is the number one thing that probably made me go viral. I definitely watched her videos, she has the sound, and I’ve definitely tried to copy her sound and her expressions.

Have you always been a big Keeping Up With The Kardashians fan?

I never watched it that much at first. I knew who they were, of course. But I started falling into it more when Kylie and her lip kits developed. I started to watch the Kardashians more, and definitely since I started doing "Deaf Kardashians" series, I’m watching them a lot more now.

In addition to "Deaf Kardashians," you do a lot of posts about the importance of closed captioning and how it impacts the way the deaf and hard of hearing community consumes media. Can you elaborate on it?

I made that video because it’s very rare to see anyone who’s deaf on TikTok. I just started thinking about it. We don’t have access to closed captioning, we can’t hear the sounds — TikTok is primarily about audio and dances, so we don’t have all of those features on the app.

What should apps be doing to be more accessible?