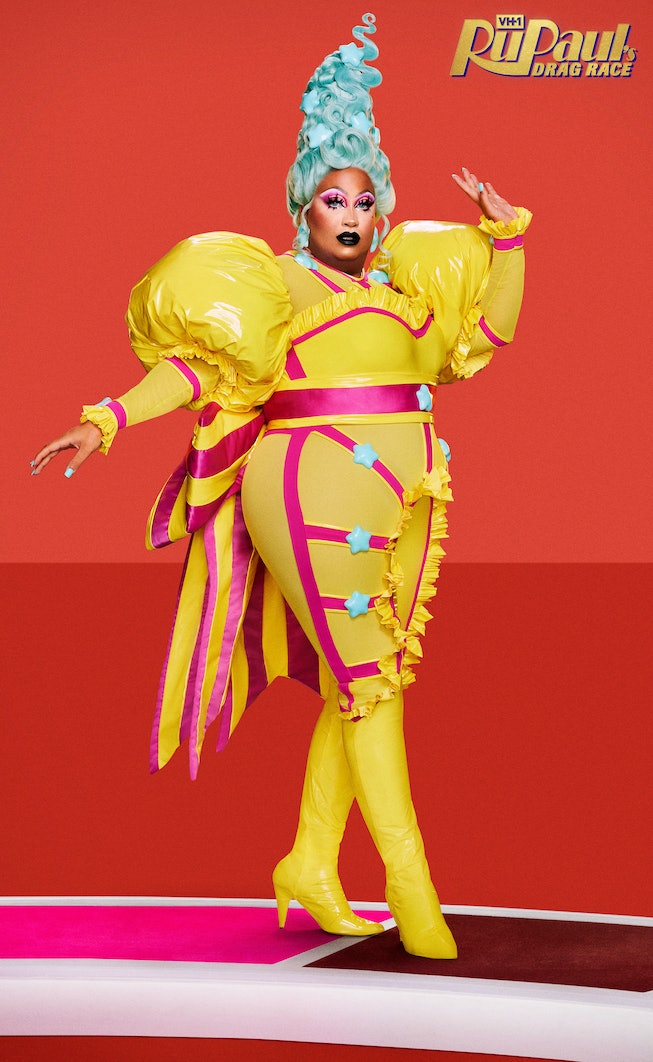 No one wants to land in the bottom on the first episode of a season of RuPaul’s Drag Race. But sometimes, it can all be worth it if it ends with RuPaul telling you that you just might be the season's Lip-Sync Assassin. Such was the case for season 14’s DeJa Skye, a Fresno, California queen who avoided the “first-queen-out” curse by delivering an infectious, emotional rendition of Alicia Keys’ “Fallin’” that gave her the edge over fellow contestant Daya Betty.

RuPaul’s acknowledgement of DeJa’s lip-sync prowess definitely seemed to inspire the queen. From there, she settled into her own, finding her footing as she consistently landed near or at the top, even if a true win eluded her until the season’s highly-anticipated Snatch Game, when her energetic impersonation of Lil Jon had RuPaul and all her fellow competitors in stitches. Unfortunately, her goodwill started to give out after her long-awaited win. In subsequent challenges, DeJa failed to impress. This week, after being tasked with delivering a standup routine in a Ross Matthews Roast, the queen found her jokes landing on mostly deaf ears, and she landed in the bottom for a three-way lip-sync against her original opponent Daya Betty and the season’s other Lip-Sync Assassin Jorgeous. Though she certainly put up a valiant fight, her performance of Olivia Rodrigo’s “good 4 u” didn’t stand a chance against Daya, who seemed to get the song in a way her competitors didn’t. In the end, the beloved DeJa was sent packing.

Ahead of her elimination, NYLON hopped on a Zoom call with DeJa Skye to talk about being too nice to roast, the difference between “writing down a joke” and being funny “in-the-moment,” why she didn’t take the advice given to her by mentors Michelle Visage and Dulcé Sloan, whether the Snatch Game was really that bad (and which two queens were slightly better than the rest), and why she wants to be in the World of Wonder franchise for as long as she can.

In your own words, what happened this week that ultimately led to your elimination?

I have never done a roast before. I think that I am comedic when it comes to improv and doing stuff in-the-moment, but writing down a joke? That is a whole other demon, that is a whole other thing to do. With roasts, they say, "Go for the low-blows. Go for that." But I hate in a roast when things are too cutthroat, so maybe I was just thinking a little bit too nice.

I think it was Ross who said [my jokes] were just observations. Maybe that's just my humor, maybe I couldn't really think of anything that was going to that next level. But I think the bottom three all had similar critiques, so when it came down to the lip-sync, it was like, "Okay we're all three in the bottom and Ru's just going to make a decision." That's just what I was going with.

You had a rehearsal with Michelle Visage and Dulcé Sloan, where you practiced several jokes that they shot down but that you decided to keep in your final routine anyway. Out of curiosity, why did you decide to not take their advice?

I think that when it came down to it, there were many other opinions that went into [my decision] besides just Michelle and Dulcé's — there were also production’s opinions — and the things that Michelle and Dulcé were telling me were not what other people were telling me. My main thing was: If I'm going to stay true to myself, and if I believe in my material, then I should do it. That way, if I end up in the bottom or go home, I only have myself to blame. Because what if I had listened to them and they decided not to laugh? I was more or less like, At least I’ll have my integrity. This was my decision, I’m going to live with my decision, and it is what is.

In Untucked, you seemed to suggest that both Michelle and Dulcé might have been a little upset about the fact that you didn't listen to them and that might have played a role in how they judged you. Now that you’re removed from the moment, do you still think that?

In that moment, I think I was maybe just talking, or maybe I was just trying to decide what it was. But I felt like, specifically with Michelle, I think that she just held on. The first joke that I told was the one that she just didn't like. So I think she just maybe went into like, "I tried to help you and you didn't [take it]." Because the material that I said about her… I don't know if they air it, but she kind of giggled about it. So I don't know. I more or less felt like I just fully disappointed her and so she just let me have it. She was like, "I'm just not going to give you a reaction."

How did you react when you found out that this was going to be a three-way lip-sync?

You know, I think my face shows it. At first, I was shocked. But then, I was like, Alright, it is what it is, because I knew we three were all going to do well in the lip-sync. So I felt like, regardless of what any of us three did, it was still Ru's decision. We were all three going to kill it, and it would just be whoever Ru wanted to stay — that's how I took it. I was kind of just in my head about the basic fact that I had to go up against my best friend and then also someone that I really respected. So I was already in that mindset, and when [I heard that it] was a double elimination, I was like, Why not be a double? Sure. I just took it as each of us is going to do the damn thing.

So, there’s been some debate over who the Lip-Sync Assassin of the season is. A lot of people think it is Jorgeous, but as you’ve mentioned on the show, you are the one who RuPaul actually called that early on in the season. Knowing that this three-way lip-sync was against her, were you nervous? Or were you confident in your own assassin skills?

No, not at all. Jorgeous even told me herself. She was like, "You're the one person I don't want to go up against [in a lip-sync]." So for someone who I consider an assassin to see me as an assassin, [being nervous] wasn't going through my head. My head was more like, I have such a strong bond with this girl and I have to now go against her — that's where my mind space was. At that point, we had just grown so close over the weeks. All of us really. So it wasn't even about being scared, because I wasn't scared to go up against anyone. It was just, more or less, like, Damn, now I have to go up against a friend. Fuck.

In other news, you won this season's Snatch Game — in an episode where every single one of your fellow competitors landed in the bottom, no less. First of all, from your perspective, was the energy during Snatch Game really that bad? And also, how did it feel to be singled out as the only queen worthy of safety?

I do think that it was bad. Obviously, with the power of editing, it's going to be even worse. But I will say that I think myself, Angeria, and [Lady] Camden all had at least one or two jokes. The rest? No. [laughs] If I'm being completely honest, I really thought that Bosco and Willow were going to murder this challenge because I was like, These are really eclectic, smart, intelligent girls, so they're going to murder Snatch Game. And then, when I saw that they didn't even come close, I was like, Wait, what's going on? And then, the fact that I was getting laughs, I was like, Hold up. This was the one challenge that I was so scared of!

Your life is about to change now that you've been on TV. What are you most looking forward to in your post-Drag Race career?