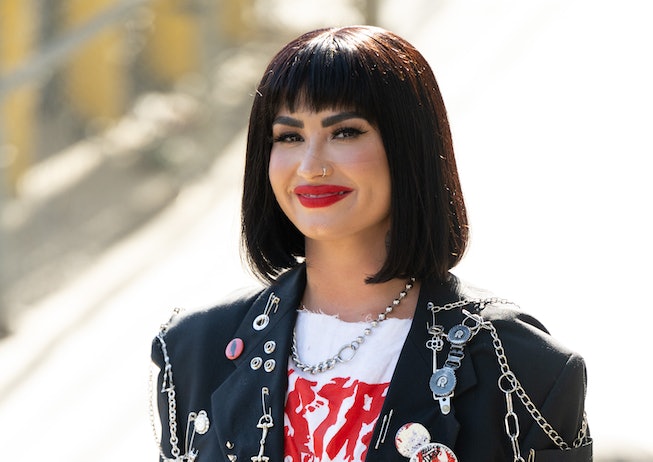 Demi Lovato is using she/her pronouns again. A couple of months ago the 29-year-old singer — who came out as nonbinary in 2021 — re-updated her pronouns on Instagram. This week she appeared on the Spout podcast to discuss her new album, HOLY FVCK, and explained the change.

When asked about her gender expression, Lovato identified as “fluid” and said, “Yeah, so they/them is... I’ve actually adopted the pronouns of she/her again.” Lovato then said that she didn’t feel attached to masculinity or femininity before, which is why she identified as nonbinary. “I felt like, especially last year, my energy was balanced in my masculine and feminine energy so that when I was faced with the choice of walking in a bathroom and it said ‘women’ and ‘men’ I didn’t feel like there was a bathroom for me, because I didn’t feel necessarily like a woman. I didn’t feel like a man. I just felt human. That’s what they/them is for me. It’s just about, like, feeling human at your core.”

When Lovato first came out as non-binary she said, “Over the past year-and-a-half I’ve been doing some healing and self-reflective work. And through this work, I’ve had the revelation that I identify as non-binary. With that said, I’ll be officially changing my pronouns to they/them.” “I feel that this best represents the fluidity I feel in my gender expression and allows me to feel most authentic and true to the person I know I am and am still discovering.”

During the Spout podcast Lovato explained that lately, she’s been more connected to her feminine side. “Recently I’ve been feeling more feminine, and so I’ve adopted she/her again,” she said. Before wrapping up their conversation Lovato explained that defining her pronouns has not been a linear process. “I think what’s important is, like, nobody’s perfect,” she said. “Everyone messes up pronouns at some point, and especially when people are learning. It’s just all about respect.”