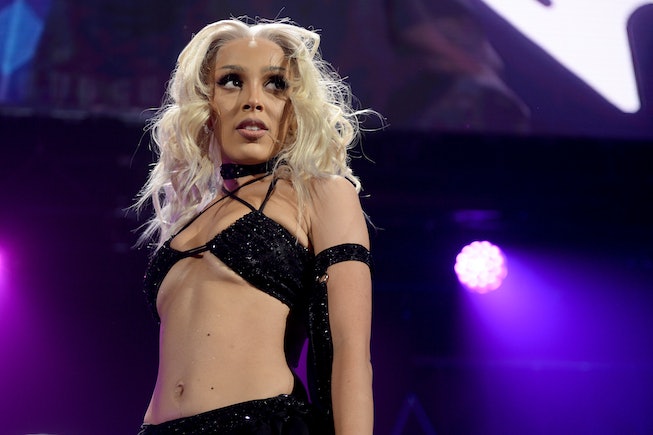 After the smash success of “Say So” as the TikTok song of 2020, Doja Cat had another big year with the release of her third album, Planet Her, which spawned radio hits like “Kiss Me More” and “Get Into It (Yuh).” In a new cover story for Rolling Stone, the genre-defying artist spoke about her working relationship with producer Dr. Luke, whose label imprint she’s currently signed to.

Luke (legal name Lukasz Gottwald) has writing credits on three songs on Planet Her and production credits on two. He’s also credited on “Say So,” which has been said to have revived his career after the Kesha allegations (he has denied them).

“There’s sh*t that he’s credited for, where I’m like, ‘Hmm, I don’t know, I don’t know if you did anything on that,’” Doja told Rolling Stone (though she later walked those comments back in a follow up statement, saying “the credits on my music are accurate”). A representative for Luke told Rolling Stone the producer “is very proud of [Doja] and the work they have done together.” And a followup statement to Rolling Stone, sent by a representative on behalf of Doja Cat, insisted that “the credits on my music are accurate.”

It’s a topic that keeps coming up in relation to Doja’s career; in six weeks, she’ll find out whether she won any of the eight Grammys she’s nominated for — with Luke being nominated for three of those, including Album of the Year for Planet Her, Song of the Year for “Kiss Me More” featuring SZA, and Best Rap Song for “Best Friend” with Saweetie.

In the interview, Doja also shared some less serious tidbits, including the fact she has a cooking show in development, and that Alexis Haines of “Bling Ring” fame used to babysit her. She also commented on her recent tweets hinting at burnout, saying she was “f*cking tired” and “never not working.” Doja told Rolling Stone she’s “really fine,” adding, “There was a lot of sh*t going on, and I needed to vent a little bit. But obviously Twitter is not the best place to talk about that.”