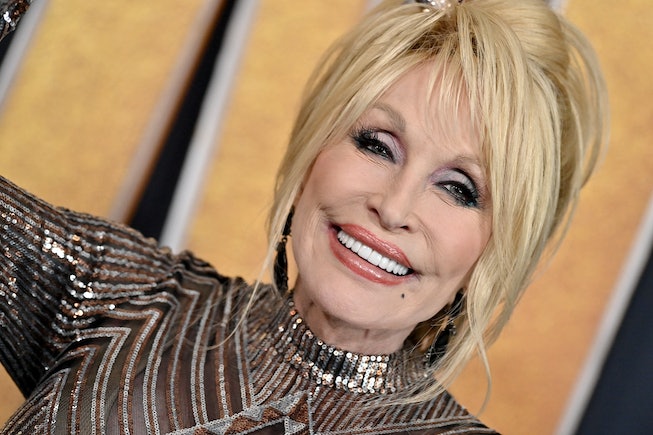 The Hall voted her in anyway, in addition to Pat Benatar, Duran Duran, Eminem, Eurythmics, Lionel Richie and Carly Simon. To be considered, artists must have released their first record 25 years before induction.

Parton took the news well, writing on social media, “I am honored and humbled by the fact that I have been inducted into the Rock and Roll Hall of Fame. Of course I will accept it gracefully. Thanks to everyone that voted for me and to everyone at the @rockhall. I will continue to work hard and try to live up to the honor.”

In many ways, it’s criminal to even think about the fact that Dolly Parton has yet to find her way into the Rock and Roll Hall of Fame. A celebrated singer, songwriter, actress, activist, and all-around Good Samaritan, the “Jolene”-singing septuagenarian has been working in the industry for more than six decades and, in that time, has blessed eager audiences with more than a few timeless hits. Being bestowed with this coveted honor has been a long time coming, which is why so many celebrated last month when the legend’s name was announced as one of 17 nominees for this year’s incoming class. The eleven-time Grammy winner felt like a shoe-in for the shortlist, but alas, we’ll never find out if she had what it took to go the distance, as Dolly Parton has just pulled herself out of the running.

Parton made the upsetting announcement in a social media post earlier today. “Even though I am extremely flattered and grateful to be nominated for the Rock & Roll Hall of Fame, I don’t feel that I have earned that right,” the icon began in a letter posted to Twitter. Quite unsurprisingly, she revealed that the decision had been made in part due to a selfless sense of responsibility to her fellow nominees, who include Kate Bush, Beck, Rage Against the Machine, Eminem, A Tribe Called Quest, and beloved Twitter icon Dionne Warwick. “I really do not want votes to be split because of me, so I must respectfully bow out,” she wrote. “I wish all of the nominees good luck.”

But don’t fret just yet. Just because Parton is pulling out of the 2022 running doesn’t mean she’s completely against the idea of ever being inducted. Continuing, Parton wrote, “I do hope that the Rock & Roll Hall of Fame will understand and be willing to consider me again — if I am ever worthy.”

And if that addendum left you with the same question as me — When does someone as iconic as Dolly Parton think she will be ready to join this elite group? — the answer is actually a bit more exciting than you might expect. Apparently, Miss Dolly thinks she needs to make actual “rock” music to be worthy of such an honor, and as such, we might get the chance to hear a new side of the country singer sometime down the line. “This has, however, inspired me to put out a hopefully great rock ‘n’ roll album at some point in the future, which I have always wanted to do,” she exclaimed. “My husband is a total rock ‘n’ roll freak, and has always encouraged me to do one.”

Well, hello! I can certainly celebrate that!

Mourn with me by checking out Dolly Parton’s announcement below.