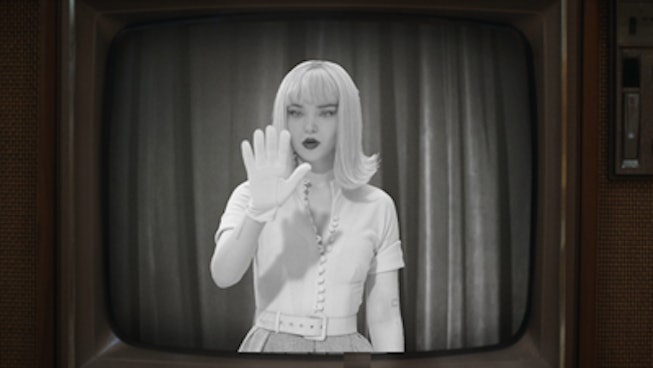 Dove Cameron’s latest music video for her song “Breakfast” has arrived, along with a powerful message about living under patriarchy and the latest attack on reproductive rights.

In the 4-minute video, the former Disney star cosplays as a businessman — clad in a pinstripe suit from Alberta Ferretti — thriving in a society that’s been rigged in her favor. This fictional land looks a lot like the world we currently live in, except this time, women are at the top of the social food chain while men are at the bottom. Shot largely in black and white and with a 50s theme, the gender-bending video questions what women have been conditioned to deal with, by putting the burden of pregnancy on men.

This afternoon, Cameron posted a clip of the music video on Instagram. The sneak peek shows her abusing her power to seduce a male colleague. Alongside the video, she wrote, “breakfast music video out everywhere now !!!! I have so much to say about this and so many people to thank, but while I try to gather my thoughts & emotions GO WATCH & we’ll come back and talk after.”

The comments section is already flooding with praise, with many people applauding Cameron’s ability to visualize the experiences, and fear, that many women face on a daily basis. In one of the music video’s most unnerving scenes, Cameron’s male colleague visits a health clinic to address an unwanted pregnancy. While sitting in the operation room the doctor says, “everything will be ok but next time, make sure you don’t drink so much and make sure you are dressed appropriately so you’re not provoking women.” Before leaving the clinic he’s given a pamphlet titled “Good Moral Behavior for Young Men.”

Meanwhile, insensitive remarks like, “You want to talk about power, my husband gets to stay at home and watch tv while I work every day,” and “Oh my god, men are so f*cking emotional,” are peppered throughout the video as well.

The Supreme Court's reversal of Roe V. Wade removed the federal right to an abortion and bodily autonomy. Cameron’s latest video is a direct response to the damage that can cause. By flipping traditional gender norms, “Breakfast” proves that no one is safe without proper rights and respect.

Check out the video for “Breakfast,” below.