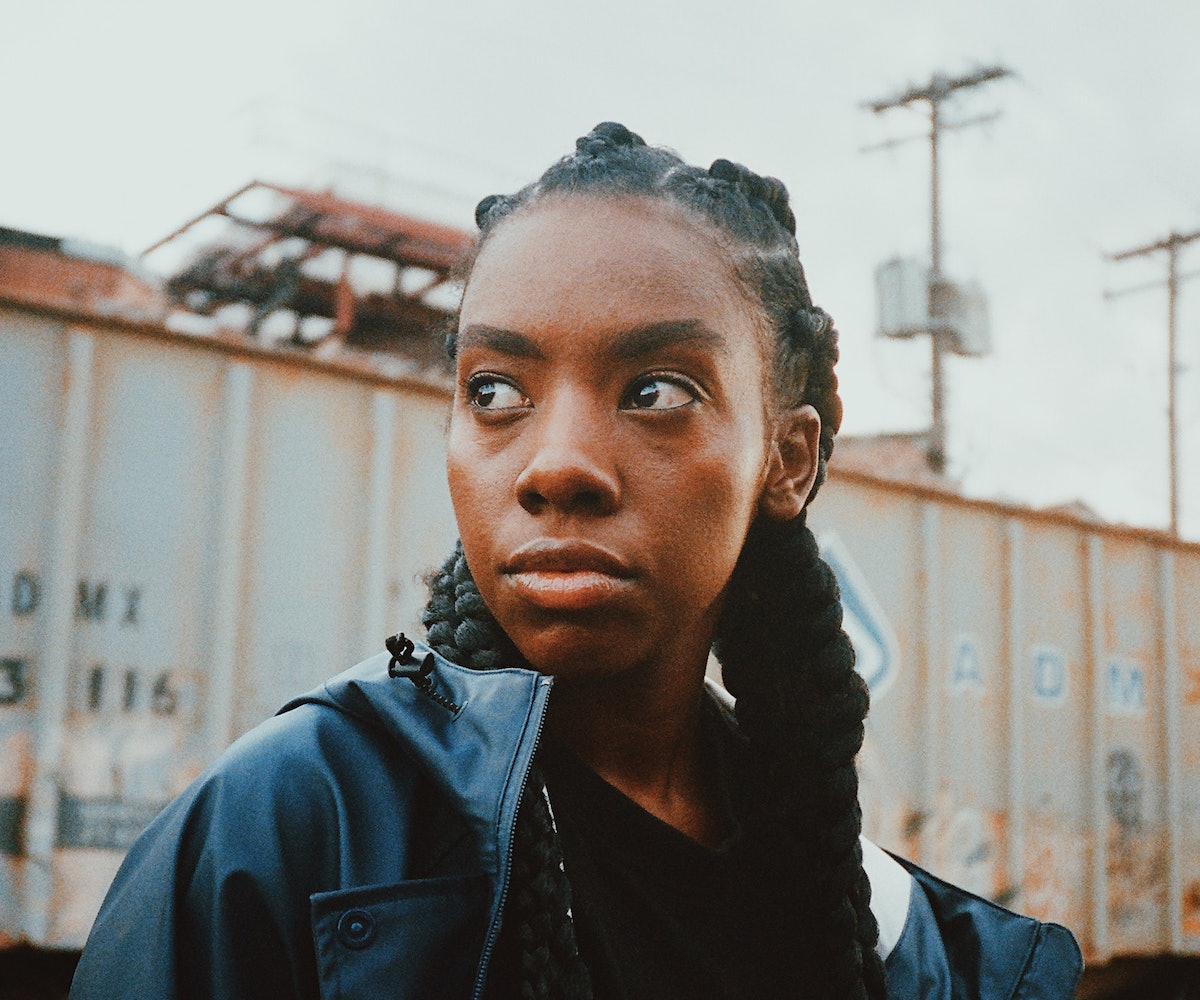 Dua Saleh has a lot going on at the moment. Fresh off their groundbreaking role playing Cal — the first nonbinary character — in Netflix’s critically acclaimed series Sex Education, the Sudanese-American artist and actor has also released a new EP. The project is a seven-track exploration of transitions, or crossovers, as they call it.

Created in the thick of lockdown, Crossover, is the musical equivalent of a shapeshifter. It’s both a club-ready, Afrobeats-driven work of art and vulnerable inspection of identity. Like Cal, Saleh identifies as gender nonconforming and used Crossover to explore what it means to be multidimensional in their art and life.

During a Zoom call, Saleh flipped seamlessly between being lighthearted and serious. Explaining the EP’s concept, they said, “I was thinking a lot about gender at the time, because my character is also nonbinary. There’s a lot of different references to elements of the trans community and queer community that are embedded into the work.”

“In other ways I was thinking — I was in lockdown at the time — about wanting there to be more party music in the world,” they continued. “People are kind of stuck in their own cycles of anxiety and depression, and different mental health issues they may deal with, or boredom, so I wanted to create something that was fun that you can vibe with and dance to.”

The result is a project that proves everything is not always as it seems. Below, Dua Saleh discusses Crossover, their songwriting process, and working with other artists.

When did you begin working on Crossover?

I guess it depends on the song. "Focal ''was a song that I made a few years ago, like a long time ago, but the rest of them were made pretty recently. Most of the songs were made within the past four months.

That’s really quick. How long does it typically take you to create a song from start to finish?

It really doesn’t take me that long. Most songs were finished in a session, within two hours. Writing-wise it takes me at least two hours to complete a song and edit it, but sometimes I like to freestyle. I think that happened with “Trash Snacks.” That was more of a free-verse but it came out really quickly, within a minute or two.

“I think EPs gave me room to experiment with sounds in a way that allowed people to have bite-size fragments of my soul.”

I read that you wrote and performed a lot of poetry as a teenager. Did that experience help your songwriting?

Well, my first introduction to poetry was when I was four years old. I think I was spoiled by the environments that I was around. Sudan and East Africa are hubs for poetry and for the poetic understanding of language. I was surrounded by people who were constantly saying poetry — or just the way they spoke in everyday life was poetic — so I was exposed to it very early on, and it’s like second nature to me. I have a really strong relationship with words.

I think the songwriting came out when I was doing a lot of poetry slams, because I wanted to get money. But I wasn't really getting that much money, and I felt kind of hyper-exploited by the trauma p*rn aspect of the industry, and them wanting more and more of me. My body was begging me to heal itself from all that was going on in the poetry world, so melodies started spilling out without me even trying to think of them. I just kept humming things to myself and singing things to myself when I was in solitude.

Do you plan on releasing an album soon?

I would love to release an album in the future. I think I found it daunting in the beginning, just because there's so much that goes along with an album and creating a full body of work. There's more intention and more space for reflection when it comes to an album, and I think EPs gave me room to experiment with sounds in a way that allowed people to have bite-size fragments of my soul.

Can you explain the meaning behind the title, Crossover?

Crossover is about the different transitions that I'm making in my life right now, so I talk about three different things. One of them is [the show] Sex Education, and my experiences there. The second is me having a more expansive understanding of my gender, and not trying to be bogged down by how I understood what trans-ness and nonbinary-ness meant in the past. The third is me challenging myself with different genres, and crossing over into genres, and that allowed me to be more curious about music in the same way I was when I first started making it.

Yeah, I noticed that this EP sounds very different from your last two. Was that a difficult switch?

I was trying intentionally to do new things. With the Crossover EP, I am an executive producer alongside Simon Christensen, who has executive produced all my other work. So I came to all the sessions with either a specific song that I wanted to reference, or a blend of genres that I was interested in. The producers were beautiful in bringing in their creativity, and they brought the vision that we all had to life.

Do you have a favorite song on the EP?

Honestly, “Focal.” The production is so amazing, Simon is such an amazing producer... Wait, that's actually hard to say. I don't know why I said that right away. I think I just have a relationship with that song because it was out a while ago, and it has Arabic in it. Maybe that's why? Although there's another song that has Arabic in it too, “Tic Tic,” but yeah, it just reminds me of Sudan.

Do you usually have a song completed before you ask someone to hop on or do you make it together from scratch?

I think I prefer to work on a song together with a person, but because of lockdown and travel restrictions it's kind of hard to work with artists that aren't directly in Los Angeles. So I made “Fitt” and sent it to Amaarae, and she was like, "Oh yeah, I'm going to write this."

I had already written “Tic Tic,” but I was like, "This does not sound right," so I asked Haleek Maul to do it instead. I also didn't want to appropriate West Indian culture, especially since I hadn't reached out to a dialect coach or anything. But he just recorded [the lyrics] I sent him, which was really cool.

And then with Duckwrth, luckily I caught him before he went on tour. I was talking about wanting to make a disco track, and then Duckwrth was like, "Oh yeah, I'm interested in dance-y vibes," because Black American house music is a huge part of his background. Then we wrote it all together in that room within one session.

Now that the EP’s complete, how are you spending your free time?

I've been writing a lot for myself. Honestly, I've been trying to connect with family and friends in Minneapolis while I can, because I'm constantly traveling, and visiting places in St. Paul, where I grew up. Outside of that, mainly I’m just doing a bunch of zoom calls and meetings, and lots of photo shoots. And, actually, I’m working on an album for the next project that I release. And because I love R&B albums, I’m working on understanding what R&B means to me.