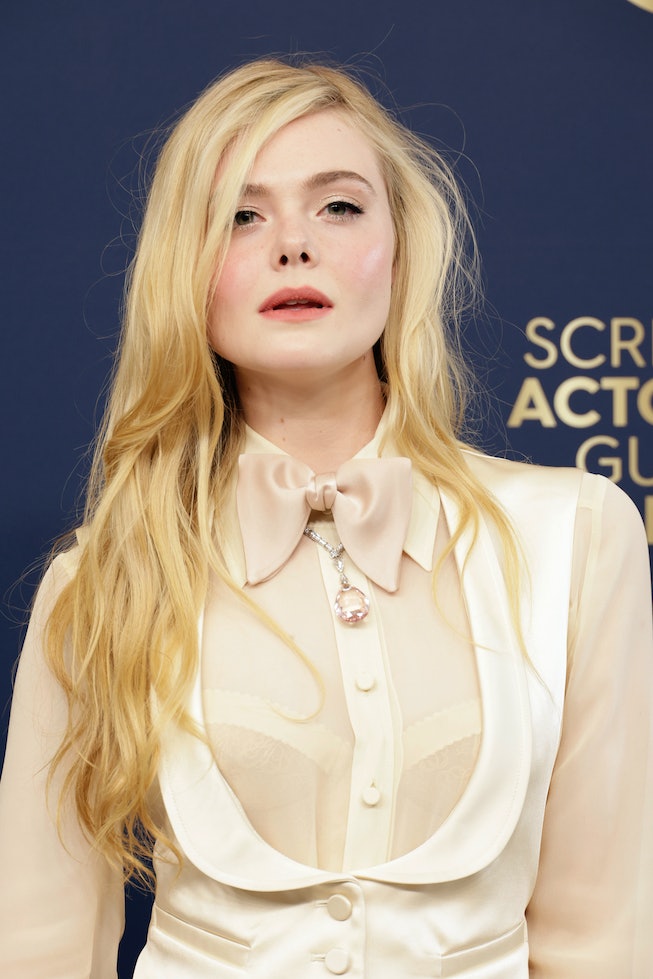 Elle Fanning opted for comfort and style at the 2022 SAG Awards on Sunday as she arrived to the red carpet in a head-to-toe Gucci business suit complete with a cream blouse, white vest, sparkly black pants, Cartier jewels and Pasquale Bruni rings.

It’s a slightly surprisingly look for the actress who tends to favor flowy princess gowns at red carpet events. It turns out she just wasn’t feeling the hassle of a fussy ensemble this time around, telling the reporters at E! on the red carpet, “I just didn’t feel like wearing a dress.” Relatable.

In that same vein, the star also kept her beauty and glam to a minimum, choosing to wear her chic, disheveled blonde hair down with minimal makeup, only donning what appears to be some black liner and her signature pale pink blush.

Still, it’s set to be a big night for Fanning, who’s up for one major award tonight, Outstanding Performance by a Female Actor in a Comedy Series for her performance in The Great, as well as one ensemble award, Outstanding Performance by an Ensemble in a Comedy Series, also for The Great. The semi-historical Hulu comedy series centers around the rise and reign of Catherine the Great — the longest-reigning female ruler in Russia’s history — and in which Fanning plays Catherine.

On the red carpet, she found a moment to embrace and grab some photos with fellow nominee Sandra Oh, who’s nominated alongside Fanning in the same category for her performance in Netflix’s English department comedy, The Chair. They’ll both be going against a solid field of other contenders, including Jean Smart (“Hacks”), June Temple (“Ted Lasso”), and Hannah Waddingham (“Ted Lasso”).

See more details of Fanning’s laid-back look below, and all the other looks from the 2022 SAG awards red carpet here.