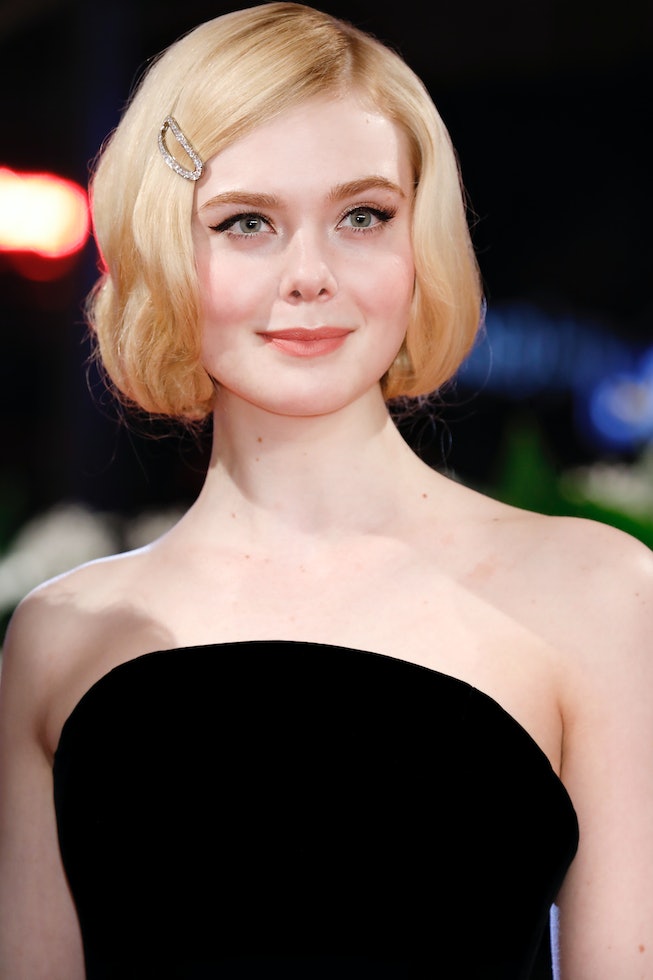 Many were shocked by Elle Fanning's lack of an Emmy nomination for her outstanding turn in the debut season of Hulu's The Great. But just two days after the official awards ceremony, it's Fanning that's getting the last laugh with a splashy cover for Vanity Fair's October issue. The accompanying story, written by Jancee Dunn, reveals quite a lot about the young star: In a nod to the critically-acclaimed Sofia Coppola debut, her first private Instagram account was @virginsuicides, which she cites as her favorite movie growing up. Robert De Niro and his family once came to her house for an Easter egg hunt, and her mother told her that his children must be the ones to find the golden egg. She had slumber parties with Kirsten Dunst while filming The Beguiled. And she even once starred in a commercial for Smuckers Uncrustables, where she was the only kid that wouldn’t spit out the sandwiches when filming was done. But perhaps the most intriguing reveal was that Fanning, who has been acting for the better part of the past two decades, is now interested in directing.

Fanning talked about how playing Catherine The Great — who has been revered for her contributions to art, science, and education — helped her find her own voice and confidence. Describing this character as her first truly "adult" role, Fanning, who also served as an executive producer on the Hulu series, says, "[My confidence] had to grow inside me... I’d think, Do I speak up? And sometimes, I’d be too scared, and I wouldn’t. Over time, I realized, Why am I saying to myself, 'You’re young, you need to listen to this.' Why am I apologizing? Yes, I am young, but I’ve been in this business for a long time, and my opinion matters.”

Moreover, the 22-year-old actress remembers finding herself paying attention to other production-related things outside her performance. “I love all the technical aspects of the film world, and I’ve been on a lot of sets, but I would have to find my voice to tell the producers that, say, in the dinner scenes, the background artists were being too proper, and they can eat with their hands. They don’t have etiquette in Peter’s court,” she says. “Those weird little details stand out so much to me. I think it’s all leading to directing. I want to tell my own story.”

Hilariously enough, such a pivot wouldn't even be too big of a leap. As part of the story, Dunn also spoke to Alejandro González Iñárritu, who directed the then seven-year-old star in the 2006 film Babel, where Fanning played the daughter of Cate Blanchett and Brad Pitt. After explaining how he coached the "emotionally intelligent" Fanning through a police car-chase scene (she nailed all 17 takes, naturally), Iñárritu recalled an instance where Fanning then helped the boy who was playing her brother nail his takes too. “And when the other kid was exhausted, she started directing him," the Oscar-winning director recounted. "She’d say, ‘Let me help you. When was the last time you did not receive a present that you were expecting? Just close your eyes and remember that day.’ She was giving him emotional instructions on how to make it happen in his heart.”

What Fanning will eventually direct is anyone's guess. But according to Vanity Fair, we can expect something politically incisive. Speaking about what she's been up to in a post-George Floyd world, Fanning mentioned "donating, protesting, having difficult conversations with family and friends, and emailing government officials" while also asserting that, "“Black Lives Matter cannot be a trend. This is a movement that has to stay alive, and every day we have to commit.” As part of those efforts, Fanning has committed to taking on projects “that are going to, through art, make people form different opinions or have a debate.”