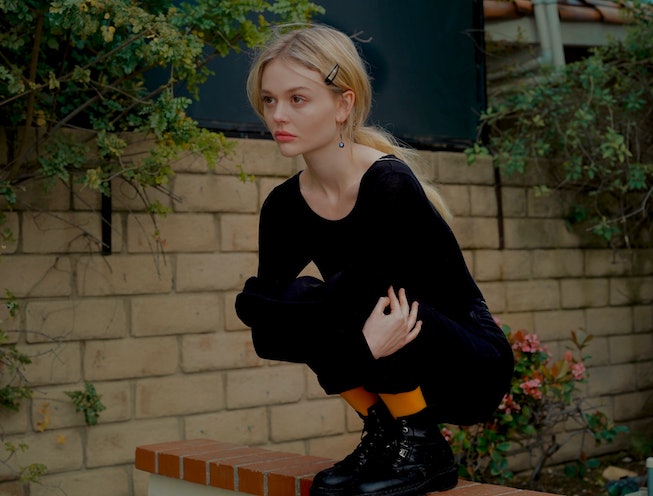 In March, it was announced that 17-year-old actress Emily Alyn Lind had landed the highly coveted lead role in HBO Max's upcoming Gossip Girl reboot. While quarantine may postpone her journey to the Upper East Side, it's given way to another creative project: music.

Like Gossip Girl 1.0 stars Leighton Meester and Taylor Momsen before her, Lind is forging a music career in tandem with acting. A gifted songwriter and vocalist, she's been revisiting old songs while self-isolating with her family in Los Angeles, taking them from half-finished voice memos to what will soon be a fully formed EP. First up: "Spotless Mind," her debut single, which comes complete with a music video shot in her childhood bedroom over the past few weeks. "I wasn't going to release anything, but this came out of nowhere," she says. "I've been just honing this new craft that I've found of mixing and editing and learning as I go in order to create this EP. It's a challenge, but I like it."

Watch the video for "Spotless Mind," premiering exclusively on NYLON, below and read on for a quarantine chat with Lind (who just celebrated her 18th birthday) about new music, staying creative, and a status update on Gossip Girl.

What made you decide to release music during this time?

I released a song called "Castles" about seven months ago, and it was more produced and, I guess, in the pop genre, which I love. But I write more in the acoustic genre, and I have all these songs that really mean a lot to me and I'd post them on Instagram and people seemed to want me to release them, but I didn't know when would be a good time or if I ever would. Just being in quarantine and knowing what I could do with this time — to give those old songs the attention that I think they deserve — I thought it would be really fun. I wanted to release music because I also think it's what is keeping us all together. I've loved listening to new songs coming out. It's a somber time, but it's good to know that new art is being created.

What shape were the old songs in before you started working on them?

Voice memos. [Laughs]. They were voice memos on my phone. That's it. This EP is going to be very lo-fi, very acoustic. There is something very powerful to me about just a voice and a guitar or piano. It's all in your face, and it is what is, like it or not. All of these songs are lyrically very driven. I basically had a few songs that I knew I wanted to revisit, and then I wrote three more. And I'm still in the process, which is the fun part about it. As an artist, it's so easy to procrastinate, but if you set a deadline for yourself, you kind of have to do it.

Why did you decide to put out "Spotless Mind" as the first song?

That's hard. "Spotless Mind" is a song that I wrote a while ago. It was about one of the first relationships I ever had and this lesson that you learn in your first relationship where you see love for two different things. It's kind of sad but it's also beautiful — love is the best thing in the world and it's the worst thing in the world. It's understanding that something so great can also be so terrible. This EP really has to do with me being really genuine in the lessons I've learned in life. A lot of the songs have a resolution. "Spotless Mind" is interesting because it has elements of happiness and elements of somberness, too.

When did you shoot the video?

I put a lot of effort into it, but a lot of effort because I didn't know what I was doing. I think if someone knew what they were doing, they could have done it in ten minutes. As an actor and someone who is surrounded by movies and television, I see things visually, so I wanted to create something that was parallel to the song. I wanted to see it. I basically took everything off the walls of my room and cleared everything out, and had my sister's boyfriend Jordan, who is an amazing guitarist, get into a bunny suit. I had another idea, but then I saw this suit online and thought, "that's it." Then I had my little sister in a green screen suit spraying my hair blue. But I thought it wasn't enough, so one night, I decided to change it completely and projected it against a wall with a projector I found in the garage and stood in front of it. Anyway, it was a process.

Did you already know how to edit a video?

Do you have a release plan figured out for the rest of the EP?

I'm going to release another single in about two weeks, and might release another song before dropping the EP, but it's all going to be in the next month. I hear all these people online that have really supported me and are constantly asking "When is new music coming?" and I don't have answers. I'm like, "Why am I slacking? Why don't I just do it?"

Had you started filming Gossip Girl prior to quarantine?

We were in pre-production, but it's kind of up in the air right now, just like everything is. But it's coming. It's not going to go away. It will be great.

Do you want to tour with this music once concerts start happening again?

Yeah, once the apocalypse is over. I've always been interested in touring. I don't have a lot of stage experience, besides karaoke in Koreatown. I would much rather tour with this content than the pop-focused music or the more funky-rock stuff. I have a lot of different different genres that I want to explore, but this would be a really nice EP to tour with since it is mostly just me on a guitar.

What music has been keeping you sane while in quarantine?

After John Prine passed, I was delving back into his works of art over the years and really getting into it again and appreciating him for who he was. I've been listening to a lot of Adrienne Lenker from Big Thief. Bright Eyes just came out with new stuff, which is exciting. "Persona Non Grata" is brilliant. This is a hard question, because I'm listening to a million things and now I can't remember anything. A lot of Angel Olsen. Jessica Lee Mayfield is a big one; she has this really great Elliott Smith covers album. And then my favorites, Sir Bob Dylan and Leonard Cohen.

NEXT UP
Culture
Kareem Rahma Survives A Dinner Party From Hell In “Really Rich Parents” Video
Entertainment
19 Niche Music Festivals For Every Type Of Person
Entertainment
FLO Is Headlining Their First US Tour This Spring
Entertainment
Raye Explicitly Speaks Her Mind On Debut Album, ‘My 21st Century Blues’
Style + Culture, delivered straight to your inbox.