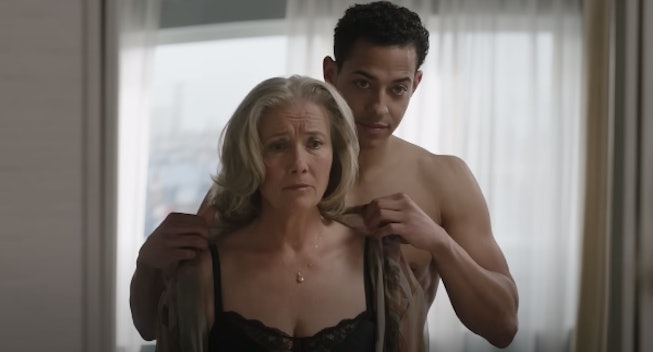 If you’ve ever thought about two-time Academy Award winner Emma Thompson and said to yourself, Wow, I bet she would be terrific in a sex comedy — preferably one that finds her acting opposite a ridiculously handsome man whose only goal in life seems to be bringing her ultimate carnal pleasure and bodily satisfaction, then boy, oh boy, do I have some fantastic news for you. Next month, everyone with two eyes and a Hulu account will be able to witness exactly that when the streaming service premieres the charming new film Good Luck to You, Leo Grande.

Directed by Animals’ Sophie Hyde and written by Katy Brand, Good Luck to You, Leo Grande follows Nancy Stokes (Thompson), a 55-year-old widow, as she embarks on a paid sexual affair with the significantly younger Leo Grande (Peaky Blinders’ unfathomably attractive Daryl McCormack). Or, as a plot synopsis describes the film: “Emma Thompson embodies the candor and apprehension of retired teacher Nancy Stokes, and newcomer Daryl McCormack personifies the charisma and compassion of sex worker Leo Grande. As Nancy embarks on a post-marital sexual awakening and Leo draws on his skills and charm, together they find a surprising human connection.”

A Searchlight Pictures release, Good Luck to You, Leo Grande will premiere just in time for the kickoff to summer when it hits Hulu on June 17. The film originally made its world debut in January at the 2022 Sundance Festival, where it enjoyed predominantly favorable reviews from critics. (It currently has a 97% on Rotten Tomatoes.) In NYLON’s recap of the festival, I praised the “dialogue-heavy two-hander” as a “brilliantly crafted exchange of ideas, slowly peeling away at each of its characters’ psyches until they are both left raw and exposed by film’s end.”

So whether you’re craving some classic Emma Thompson charm or some steamy Daryl McCormack arm (or, like any sane person, a little bit of both), you’ll certainly find something to love about Good Luck to You, Leo Grande. Long live the adult sex comedy!

Good Luck to You, Leo Grande premieres June 17 on Hulu.